The Scandalous Beginning of a Timeless Romance: Charles James Fox and Elizabeth Armistead

Scandalous Women is please to welcome author Deborah Hale to the blog. After a decade spent tracing her ancestors to their roots in Georgian-era Britain, Deborah Hale learned a great deal about the period and uncovered enough fascinating true stories to inspire her fiction plots for years to come. In 1997, Deborah won Romance Writers of Amercia's Golden Heart award and several months later sold her winning manuscript to Harlequin Historical. Since then she has written many historical romance novels with a variety of settings, as well as two other-world fantasies for Luna Books. In the pilot episode of the hit television series "Hustle" one of Deborah's books was used in a key scene! Deborah lives in beautiful Nova Scotia, Canada, a place steeped in history and romance.
As Elizabeth Charles, she is the author of the new historical fiction novel CONFESSIONS OF A COURTESAN which came out in 2011 about the 18th century courtesan, Elizabeth Armitage. Welcome Deborah!

In 1802 British statesman Charles James Fox dropped a bombshell by announcing that he had been secretly married for the past seven years to the woman he’d openly kept as his mistress for twelve years before that – one of the most celebrated courtesans of the Georgian era, Elizabeth Armistead. Their relationship, chronicled by I.M. Davis in The Harlot and the Statesman and Katie Hickman in Courtesans, was one of the great love stories of all time. 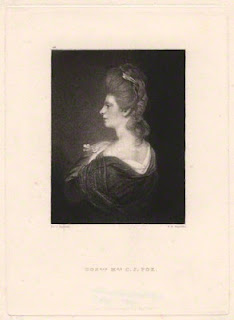 Before Fox and Mrs. Armistead became lovers, they had been increasingly close friends for at least eight years. His Parliamentary faction, who vigorously opposed Britain making war on the American colonies, often gathered at her house on Clarges Street for dinner parties where they discussed political strategy. Because of her close association with them, the press dubbed her “The High Priestess of Patriotism.” But how exactly did these unlikely lovers meet? That is a story stranger and more scandalous than fiction…

In 1775, twenty-five-year-old Elizabeth Armistead was working as a prostitute in one of the exclusive brothels in London’s West End that catered to men of the highest distinction and greatest fortunes. She must have been clever and fascinating and lucky to have lasted that long in a business where teenage virgins were highly prized. But at her age, Mrs. Armistead must have wondered when her luck might run out and she would end up pregnant, poxed or turned out to make room for ‘fresh stock.’ If any of those things happened, she would face a bleak future indeed.

One particular night Elizabeth Armistead was entertaining Lord Bolingbroke, a courtier and horse breeder, recently divorced from Lady Diana Spencer. Bully Bolingbroke had kept many of the most celebrated courtesans of the day, including Nelly O’Brien and Polly Jones, who had both been painted by Sir Joshua Reynolds. While he and Mrs. Armistead were in bed together there came a disturbance at her door. A group of Bully’s friends from his club demanded entry.

The party included Lord Egremont, who many years later recounted the story in a letter to Lord Holland. Egremont reported that Charles Fox was another member of the group and where Fox went his bosom friends Richard Fitzpatrick, James Hare and Bully’s brother-in-law Lord Robert Spencer were sure to have followed. The gentlemen had been gaming at their club with a visiting French aristocrat (most likely the Duc de Lauzon) and fell into a debate over whether the bawdy houses of London or Paris were superior. To prove their point, Fox and his friends took the Duc to a house nearby. When they learned their friend Bully was being entertained on the premises, the group decided to surprise him.

Egrement would later write, “Bully, as they called him was in bed with a Lady and they kicked the door open and she (Armistead) was the Lady.” History does not record how either Mrs. Armistead or the irascible Bolingbroke reacted to the intrusion, but within a short time he had taken her into exclusive keeping and arranged for her to make her stage debut at the Haymarket Opera House. Elizabeth Armistead did not seem to take offense at the prank. By the early months of 1777, when Richard Fitzpatrick was sent to fight in America, she was sufficiently close friends with both he and Fox that she wrote letters to him sealed inside Fox’s.

Eventually friendship ripened into the deepest kind of love. Elizabeth Armistead gave up her glittering life as London’s most celebrated courtesan and retreated to the secluded serenity of a small house in the Surrey countryside, which she shared with Fox. When his debts mounted, she assisted him by selling the two London houses and two annuities she had worked so hard to accumulate and which were her only security against destitution. Fox in turn adored her and wrote her some of the most touching love letters ever penned. 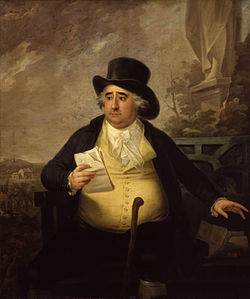 In time Elizabeth Armistead managed to leave her scandalous past behind her and become respectable – mainly by outliving so many of her contemporaries, but also due to her own kindness and likeability. She always treasured a soft spot for the family of Bully Bolingbroke, who had first raised her “from the lower ranks of her profession & introduced her into better company.” She doted upon his two sons, their children and grandchildren, who visited frequently, wrote often and sent their children to stay with her as they would with a fond grandmother. A particular favourite was young Bob St. John, the illegitimate child of an incestuous relationship between Bully’s son and his half-sister (but that is a scandalous story for another day…)

It must have been the St. John family on whom Lord Egremont reflected in later years when he paraphrased scripture in a letter to Fox’s nephew: “Mrs. Fox is a very kind-hearted woman & now very religious and she seems to have taken the good qualities of God Almighty without his atrocious ones by shewing mercy unto the third and fourth generations if, not quite, thousands who have loved her and kept her commandments.”

Kelly Boyce said…
I find Elizabeth so fascinating and your book on her life is such an great read. Thanks for sharing!
June 26, 2012 at 8:28 AM

Lilly Cain said…
It is so interesting to hear the truth behind the stories. Thank you for sharing your in depth research! I'm looking forward to reading the story!
June 26, 2012 at 9:58 AM

Lina Gardiner said…
Wow, love the history. If anyone can bring this story to life with romance, vivid characters and a book you can't put down it's Deb Hale. Can't wait to read it.
June 26, 2012 at 10:07 AM

Deborah Hale said…
Thanks for dropping by everyone! Scandalous Women is the perfect outlet for some of the research that didn't make it into my book. they didn't call the Georgian ear The Age of Scandal for nothing! :)
June 26, 2012 at 7:06 PM