Showing posts from May, 2017
Show all

Review: Undercover Girl: The Lesbian Informant Who Helped the FBI Bring Down the Communist Party 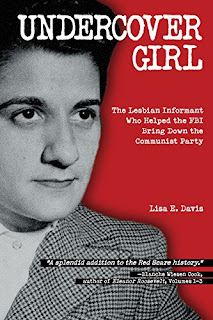 Title:   Undercover Girl: The Lesbian Informant Who Helped the FBI Bring Down the Communist Party Author:   Lisa E. Davis Publisher: Publisher: Imagine (May 9, 2017) How acquired:   Edelweiss What it’s About:   At the height of the Red Scare, Angela Calomiris was a paid FBI informant inside the American Communist Party. As a Greenwich Village photographer, Calomiris spied on the New York Photo League, pioneers in documentary photography. While local Party oﬃcials may have had their suspicions about her sexuality, her apparent dedication to the cause won them over.  When Calomiris testified for the prosecution at the 1949 Smith Act trial of the Party's National Board, her identity as an informant (but not as a lesbian) was revealed. Her testimony sent eleven party leaders to prison and decimated the ranks of the Communist Party in the US. My thoughts:  When I saw this book on Edelweiss, I immediately clicked the request button. It sounded like something that was ri
Post a Comment
Read more
More posts