Showing posts from January, 2022
Show all

Interview with Mimi Matthews - The Siren of Sussex 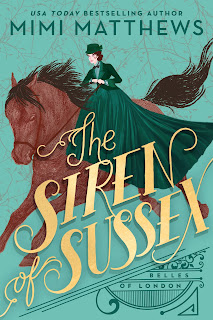 I am delighted to welcome author Mimi Matthews to the blog to talk about her new historical romance novel The Siren of Sussex which came out this month from Berkley Romance.         Victorian high society’s most daring equestrienne finds love and an unexpected ally in her fight for independence in the strong arms of London’s most sought after and devastatingly handsome half-Indian tailor. Evelyn Maltravers understands exactly how little she's worth on the marriage mart. As an incurable bluestocking from a family tumbling swiftly toward ruin, she knows she'll never make a match in a ballroom. Her only hope is to distinguish herself by making the biggest splash in the one sphere she excels: on horseback. In haute couture. But to truly capture London's attention she'll need a habit-maker who's not afraid to take risks with his designs—and with his heart. Half-Indian tailor Ahmad Malik has always had a talent for making women beautiful, inching his way toward recogn
Post a Comment
Read more
More posts