Showing posts from June, 2012
Show all

The Scandalous Beginning of a Timeless Romance: Charles James Fox and Elizabeth Armistead

Scandalous Women is please to welcome author Deborah Hale to the blog. After a decade spent tracing her ancestors to their roots in Georgian-era Britain, Deborah Hale learned a great deal about the period and uncovered enough fascinating true stories to inspire her fiction plots for years to come. In 1997, Deborah won Romance Writers of Amercia's Golden Heart award and several months later sold her winning manuscript to Harlequin Historical. Since then she has written many historical romance novels with a variety of settings, as well as two other-world fantasies for Luna Books. In the pilot episode of the hit television series "Hustle" one of Deborah's books was used in a key scene! Deborah lives in beautiful Nova Scotia, Canada, a place steeped in history and romance. As Elizabeth Charles , she is the author of the new historical fiction novel CONFESSIONS OF A COURTESAN which came out in 2011 about the 18th century courtesan, Elizabeth Armitage. Welcome Debora
8 comments
Read more

Joyce McKinney and the Manacled Mormon 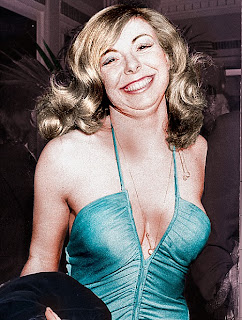 “I loved him so much I would ski down Mount Everest naked with a carnation up my nose for the love of that man.” – Joyce McKinney The story of Joyce McKinney and the Manacled Mormon sounds like a Quentin Tarantino film or an episode of South Park. It’s almost unbelievable that the story actually happened; that it wasn’t something that was made up by the National Enquirer or the Globe like all those Big Foot sightings or Bat Boy. They say that truth is stranger than fiction and it is certainly true in this bizarre story of one beauty queen’s obsessive love for a pudgy Mormon missionary. In McKinney’s version she was just trying to save the man she loved from the mind-bending control of a religious cult. In Anderson’s more horrific tale, McKinney held him hostage for 3 days in a remote Devon cottage, chained him to a bed and forced him to have sex with her. Thirty-five years later the story continues to baffle and to titillate, most recently in Errol Morris’s latest documentar
5 comments
Read more

June Book of the Month: The Queen's Vow 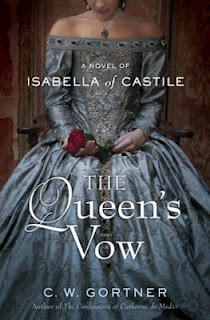 Title: The Queen’s Vow - A Novel of Isabella of Castile Author C.W. Gortner (The Confessions of Catherine de Medici, The Last Queen) Publisher: Ballantine Books (Random House) Pub Date:  June 12, 2012 What it’s about: The book covers Isabella’s life from the age of 3 when her father King Juan dies to 1492, when as we all know, Columbus sailed the ocean blue. Isabella, her mother, and her younger brother Alfonso are forced to flee after her father’s death to a remote castle in Spain, to keep them safe from those who might seek to get rid of Alfonso. When Isabella is barely a teenager, she and her brother are taken from their mother’s home to live under the watchful eye of their half-brother, King Enrique, and his sultry, conniving queen Juana of Portugal. There, Isabella is thrust into danger when she becomes an unwitting pawn in a plot to dethrone Enrique. Suspected of treason and held captive, she has to walk a tight rope, torn between her loyalty to her half-broth
2 comments
Read more
More posts