Showing posts from August, 2015
Show all

Winner of The Sisters at Versaille Giveaway

August 28, 2015
The Winner of The Sisters at Versaille Giveaway  is Nadine Tatum Thanks everyone for entering and for reading the blog!
Post a Comment
Read more

Review and Giveaway: The Sisters of Versailles 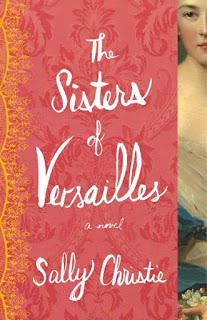 Title:   The Sisters of Versailles Author:   Sally Christie Pub Date:   September 1, 2015 Publisher:   Atria Books How obtained:   Via TLC Book Tours (Edelweiss) What is it about: Goodness, but sisters are a thing to fear . Set against the lavish backdrop of the French Court in the early years of the 18th century,   The Sisters of Versailles   is the extraordinary tale of the five Nesle sisters—Louise, Pauline, Diane, Hortense, and Marie-Anne—four of whom became mistresses to King Louis XV. Their scandalous story is stranger than fiction but true in every shocking, amusing, and heartbreaking detail. Court intriguers are beginning to sense that young King Louis XV, after seven years of marriage, is tiring of his Polish wife. The race is on to find a mistress for the royal bed as various factions put their best foot—and women—forward. The King’s scheming ministers push Louise, the eldest of the aristocratic Nesle sisters, into the arms of the King. Over the following d
13 comments
Read more
More posts