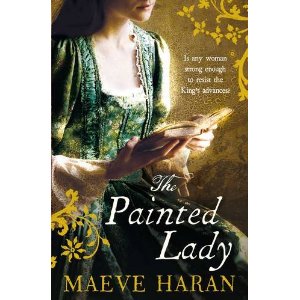 'This is my tale and I will leave you to tell whether it be high romance or tragedy.’

Sixteen-year-old Frances Stuart arrives at the Restoration court to find her innocence and beauty are highly-prized commodities, envied by the women and desired by the men. Before long, King Charles II falls passionately in love with her and will stop at nothing to make her his mistress.

But Frances is no conventional court beauty. She is determined to make her own choices in life, and to be with the man she loves. Can she overcome the dangerous pitfalls of the King’s obsession, the Queen’s jealousy, and the traps set for her by the King’s notorious mistresses, and make the life she wants for herself?

Set against the drama of the Great Plague and the Fire of London, The Painted Lady brings to life the vibrant and decadent court of Charles II and in Frances Stuart discovers a passionate young woman prepared to fight for her own destiny. 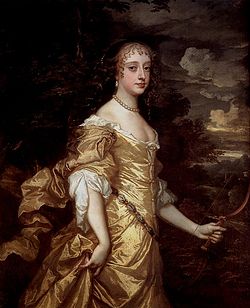 My thoughts: King meets girl, King loves girl, King doesn't get girl.  If you change the last sentence it would the story of Henry VIII and Anne Boleyn, but no this is the story of the one woman who got away from Charles II, the one woman who didn't succumb to his charms, who held out, not for marriage but because she was in love with someone else. Maeve Haran's new book The Painted Lady (published in Britain by Pan Books, thanks to Daphne at Tanzanites Castle Full of Books for alerting me to the book), features a tale as old as time but with fascinating twist.

I'm a sucker for any book set at the Court of Charles II.  Perhaps it's all those Restoration plays that I read in theatre history in college or performed during my acting career, but I adore the licentiousness of the period. It's like Restoration Dynasty, everything is about money, sex and power but it was also a great period in English literature, particularly the stage which had been dormant during the years Cromwell was in power.  All those repressed desires, well not in the case of Charles II who could have used a chastity belt!

The book opens in 1659 when Frances and her family are in exile at the court of Louis XIV, waiting hopefully for the moment when Charles will be restored. It is in France that Frances first makes the acquaintance of the King, but it is not unil 4 years later, that the story really begins.  Frances has been sent to take up a post as a Maid of Honor to Queen Catherine who is just about to arrive in England.  No sooner does she arrive at court when the King spies her beauty and falls madly in love with her. What follows is 400 pages of will she or won't she? It sounds like it would be tedious but surprisingly it isn't.  In Haran's skillful hands, Frances is no goody two shoes holding out for a crown or clutching her virtue with two hands.  She's a romantic girl, also a bit childish (she loves to build castles out of playing cards and to play Blind Man's bluff) but Frances  is also sensible, independent and spunky, at home wearing breeches or a pretty ball gown. She yearns after years abroad to have her own home. Can't fault a girl for that!

As I read the book, I also felt for Charles, a flawed man definitely but one who in is own way years for the same things that Frances wants. Of course, after years of poverty, humiliation and degradation, it's now wonder that he wants what he wants when he wants it. Frances, however, is an astute judge of character, she knows that the King once he has her, will toss her aside. Unlike Barbara Castlemaine who is only after what she can get, Frances has no desire to push herself or her family forward.

Haran is not only a master at getting deep in to her character's psyche, but she manages to make the 17th century amazingly vivid and real. She doesn't shie away from the harsher elements of life, there are countless descriptions of just how dirty and disgusting the streets of London were, and the lack of hygiene amongst even the nobility! My only quibble with the book is that we don't get to see who Frances' other admirers were.  Apparently Pepys thought she was one of the most beautiful women he had ever seen as she was courted by several men before the King staked his claim on her, but the reader isn't privileged to see any of that which I think is a shame. It would have made the book that much richer and explained a little more what the King saw in her, the qualities that made him choose her to be the face of Britannia. The characters in the book seem to spend most of their time envying her or placing bets to see when the King might get lucky!

I enjoyed this book immensely for the rich recreation of Restoration London, and a heroine that was a breath of fresh air, and a love story that makes you believe that someone people are fated to be together.
Charles II Duke of Richmond Frances Stuart

Prayag Verma said…
This is a Amazing blog but its Facebook presence is very minimal . By using Facebook correctly you can get a lot more readers for your blog. To go viral on Facebook visit Here
September 23, 2011 at 10:09 PM