Spirit of a Dove - Guest Post by Stephen Bourne

April 26, 2017
Spirit of a Dove
The closest rival of Josephine Baker, British siren Evelyn Dove was an international star in the 1920s and 1930s. In his new biography, Evelyn Dove: Britain’s Black Cabaret Queen, featuring over 50 rare photographs, Stephen Bourne reviews a life marked by success, scandal, heartbreak and obscurity. 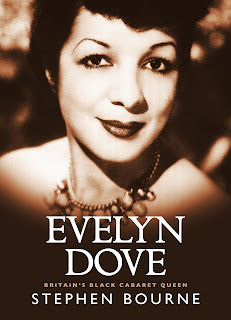 Evelyn Dove was one of the true pioneers of the booming cabaret age of the 1920s. She thrilled audiences around the world and her exquisite stage costumes helped to make her one of the most glamorous women of her time. Evelyn was a black British siren who toured Europe throughout the 1920s and 1930s, courting admirers and fans wherever she performed. Her mesmerising movie star looks and grace captivated those in her presence. The public and press couldn’t get enough of the rising star who went on to replace Josephine Baker as the star attraction in a revue at the famous Casino de Paris. In 1936, amidst a frenzy of public interest, she became the first black British singer to try and conquer America, 25 yearsbefore Shirley Bassey. Evelyn headlined a cabaret show at New York’s popular Connie’s Inn. This rivalled the Cotton Club as a showcase for the best in black talent.
However, Evelyn was unsuccessful at winning over American audiences. Black and white American audiences did not take to a sophisticated black Englishwoman who sang a repertoire of songs in French, German and Italian. At that time they expected a black woman to sing either upbeat jazz numbers, or tear their hearts out with the blues. In fact, Evelyn was disadvantaged from the start. At Connie’s Inn she had to follow the enormously popular Billie Holiday who had scored a big success with her show Stars Over Broadway in which she co-starred with the legendary Louis Armstrong. The personalities and singing styles of Evelyn and Billie could not have been more different.
Evelyn’s career was one of many highs and lows, but at the height of her fame in the 1920s and 1930s she was a young adventuress who refused to be constrained by her race and English middle-class background. 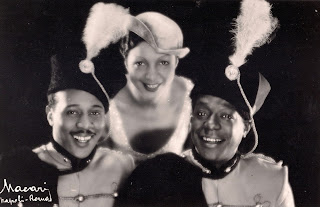 Evelyn was mixed-race, born into privilege in London in 1902 to a West African father and English mother. Her father, Frans Dove, was born in Sierra Leone into a wealthy family and in the 1890s he spent time in London studying law. He married Evelyn’s mother, Augusta, in 1896. Evelyn was educated privately until she studied singing, piano and elocution at the Royal Academy of Music. As a trained contralto, in the early 1920s she hoped for a career on the concert platform, but this was almost impossible in Britain for a black singer at that time. So Evelyn worked in London cabaret shows instead and the all-black cast jazz revues that toured Britain and eventually took her to Europe where she was a sensation. 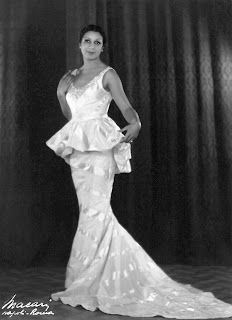 Evelyn spent several years in Italy where she proved to be enormously popular with audiences and then, in 1932, she travelled to Paris to replace the legendary Josephine Baker as the star attraction of the Casino de Paris. For the revue, Evelyn wore Josephine’s flimsy, revealing costume. Consequently the prim and proper middle-class English girl scandalised her family by appearing semi-naked on stage in Paris and it was said that her respectable and strait-laced West African father disowned her.
Following her disappointing trip to New York, Evelyn took off to India in 1937 where she triumphed in cabaret at the popular Harbour Bar in Bombay (now Mumbai). One newspaper, The Evening News of India, introduced her as “an artist of international reputation, one of the leading personalities of Europe’s entertainment world” and “the closest rival of the great Josephine Baker”. The review of her cabaret show was rapturous: “Evelyn Dove is very easy on the eye with her splendid, tall figure, and her pleasant face and flashing eyes.”
When Hitler’s war clouds appeared over Europe, Evelyn couldn’t go back to France or Italy. Instead she returned to Britain. Throughout World War II she enjoyed the same appeal as the ‘Forces Sweetheart’, Vera Lynn. The BBC employed Evelyn all through the war, and she proved to be one of radio’s most popular singers, appearing in a wide range of music and variety programmes. Many of these appearances were broadcast to the forces, while others could be heard on the BBC’s West African and Caribbean airwaves. In fact, as early as 1925, Evelyn had the distinction of becoming the first black woman to sing on BBC radio.
Starting in 1939, for almost a decade Evelyn made radio broadcasts, including over 50 editions of the series Serenade in Sepia in which she was featured with the Trinidadian folk singer Edric Connor. The series was so popular that, in 1946, the BBC transferred it to their television service. Evelyn and Edric became household names and they were among Britain’s first television stars in the early post-war years when the medium was still in its infancy. Regrettably, none of their appearances exist, having been transmitted live before technology was invented to make recordings of television shows.
In the 1940s Evelyn enjoyed another decade at the top of her profession, with numerous radio broadcasts, concert appearances, and by becoming the first black woman to star in her own television series. The following decade her career took an unexpected downward turn. Work became scarce and, in 1955, desperate, she applied to the post office for a job as a telephonist. But even more humiliating was the fact that she had to ask the BBC for a reference. In 1956 the tide began to turn when she landed an acting role on BBC television as Eartha Kitt’s mother in the playMrs Patterson. Two years later she was back on stage, in London’s West End, as one of the stars of Langston Hughes’s musical Simply Heavenly. Evelyn then joined one of Britain’s first black theatre companies, the Negro Theatre Workshop, founded by her former co-star Edric Connor and his wife Pearl. The Workshop staged its first major production A Wreath for Udomo in London in 1961, with a memorable cast that included Earl Cameron, Lloyd Reckord and Evelyn. The Workshop also gave opportunities for a new generation of young black British actors to learn their craft, including Rudolph Walker and Nina Baden-Semper. In 1965 Evelyn made one of her last stage appearances in the Workshop’s acclaimed production The Dark Disciples, a blues version of the St Luke Passion.
After her star began to fade, Evelyn suffered from depression and in 1972, at the age of 70, she was admitted to a nursing home in Epsom, Surrey. In the 1950s Evelyn had befriended a young singer and actress called Isabelle Lucas who later found fame as Lenny Henry’s mother in the television sitcom The Fosters. Isabelle later explained what happened to Evelyn: “I felt very sorry for her because she had so much talent, so much to give. I stayed in touch with Evelyn until she died in 1987. She was still a lovely woman when she was old. I went to her funeral, but no one else did, apart from one or two members of staff from the home. It made me very sad.”
In the 1920s and 1930s many African American expatriates settled in Europe including Josephine Baker, Adelaide Hall and Elisabeth Welch. They captivated audiences with their songs, beauty, elegance and style. Evelyn stood alone as a black Briton who joined these trailblazers. They were women who created a glamorous new image for black women in show business, far removed from the bandanna-wearing mammy.
Evelyn Dove was a trailblazer who was a head of her time, forging new barriers and facing up to her own personal struggles with determination and defiance. Her spirit remains alive in all of us. 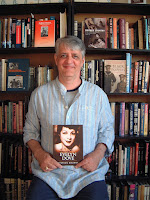