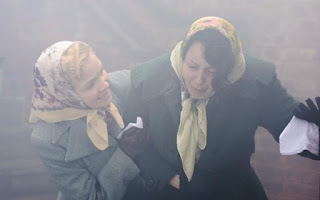 This episode was all about the Great Smog of 1952 which I had never heard, but was apparently a really big thing.  Having experienced a little bit of London Fog in my lifetime, I can’t imagine what it must have been like to have to deal with the vat of pea soup that was served up in 1952.  I’m not going to lie, this episode felt like a bit of a placeholder, as if the writers wanted to hold off getting to the coronation as long as possible. I wasn’t sure where they were going with it.  What we got was a bit of a deeper glimpse at some of our main characters, particularly Sir Winston Churchill who does not come off very well in this episode. 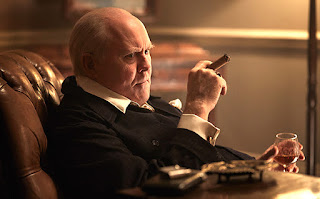 We learn at the beginning of the episode that the whole thing could have been prevented.  Churchill was apparently warned by UK scientists that a great smog was a possibility. Instead, Churchill ignored the warnings by recommending that people continue to burn coal for fuel in an effort to boost the economy. Good intentions, bad idea.  Churchill is like the politicians who like to pretend that climate change isn’t really a thing. Unfortunately for Churchill, one of the government employees decides to go rogue and let former Prime Minister Clement Atlee know what’s what. He even throws Churchill under the bus by showing Atlee minutes from a Cabinet meeting that showed that Churchill ignored previous suggestions for precautionary measures or setting up a Clean Air Service.  Luckily for Churchill, Atlee tells Collins that they should sit on this information because they have no guarantee that the Great Smog is going to actually happen.  Cue smog! The entire city, not to mention the entire country, is blanketed in it.  The smog effectively grounded all the planes and halted any transportation save for walking It is so bad; they warn people to stay home because of the lack of visibility. A national crisis has arisen, and no one is prepared to deal with it.

Meanwhile Prince Philip is having a grand old time taking flying lessons with his new BFF Peter Townsend. This irks Churchill to no end. Instead of worrying about the smog and the damage it might cause, he spends an entire meeting with the Queen, informing her that Philip needs to give up his new hobby. The Queen puts her foot down and tells him that her family’s private lives are in no way a concern of the Cabinet.  Even the Cabinet wonders why Churchill is wasting their time on something so trivial.  They think the old man has finally lost his marbles. Meanwhile Atlee is still dithering about what to do. He’s totally in danger of throwing away his shot. Instead he prefers to wait for it (obligatory Hamilton references). This is why people get frustrated with politicians! It’s left to Lord Mountbatten to pay Elizabeth a visit, stating that no one has any confidence in Churchill anymore, not even his fellow politicians.  Unlike her father who refused to ask Churchill to resign, Elizabeth is made of sterner stuff, and is fully prepared to make the change.

In this episode, we spend a bit of time with Churchill’s secretary Venetia Scott and her roommate as they deal with the smog.  If this were any other series, Venetia would be our plucky heroine. She soldiers on to work every day despite the smog, while her roommate succumbs to illness and stays home. Venetia has a bit of a crush on the Prime Minister.  She finds a copy of one of her books and spends a delightful evening reading it.  I’m surprised that she didn’t sleep with a picture of him under her pillow, although she does gaze rather fondly at a photo of him as a young man at various points in this episode. She’s such an intriguing character, so of course, she doesn’t make it through the episode. Apparently I’m not allowed to have nice things.

Somehow the Queen manages to find her way through the fog on foot to Marlborough House to have a deep conversation with her grandmother Queen Mary. Elizabeth asks her grandmother if this smog is an Act of God, and what role the divine plays in the monarchy. Queen Mary gives her a speech about how “God Put Us Here to Give Ordinary People Something to Strive for.” Which is great in the long run but not very helpful in the here and now. It is a prime example of just how little actual power the Queen has. I suppose nowadays, her press people would have suggested that she do a broadcast or something to assure the people. 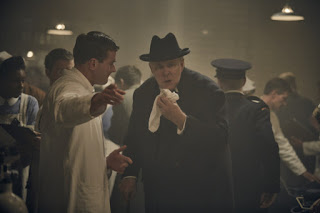 Churchill must have been born under the luckiest star on the planet, because just when you think he is done for, he manages to pull a rabbit out of the hat.  After he learns about what happened to Venetia, he high tails it to the hospital and is appalled by what he finds.  London’s hospitals are understaffed and under equipped to deal with the influx of patients. He calls an impromptu press conference, writes his speech on a prescription pad, and delivers an uplifting speech to the nation, saving his bacon once again. It’s inspiring but one gets the sense that Churchill has just used up his last lifeline. The sad thing is, if Venetia hadn't died, would Churchill have done anything? The episode implies that he was so out of touch, that the answer might have been yes! Of course now the Queen can’t ask him to resign, but she does manage to get him to let up on Prince Philip and the flying lessons although he has to have permission from the Cabinet before he does anything crazy.

And like a miracle, just as Churchill and Elizabeth finish their meeting, the smog lifts.  I ended up liking this episode a lot after initially being like ‘WTH?’  It was a nice respite after the gloomy atmosphere of the past two episodes.  The viewer is left wondering, like Elizabeth, what would have happened if the fog hadn’t lifted when it did, if it had gotten worse before it got better? What if Atlee had acted on the information that he’d been given, instead of acting like a gentleman? One of the nicest bits in the episode is when Venetia quotes Churchill to the man himself, reminding him of who he once was.  I got the impression that Churchill felt that the people of England had survived worse during the war, so how much could a little smog hurt compared to the Blitz! In this episode, Churchill is clinging to power by his fingernails. I get it, he led the country admirably during WWII, only to be turfed out of office after the war.  And now, once again he held the highest political office in the land but times had changed and it is not clear that Churchill had changed with them. I wasn’t sold on John Lithgow as Churchill initially, he’s way too tall, but this was his episode and he knocked it out of the ballpark.