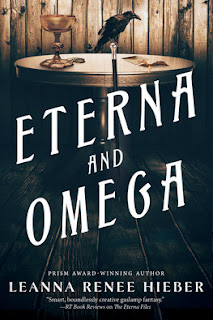 Hello everyone! I know it has been a long time since I have blogged but I have an exciting giveaway that I couldn't wait to share with you. ETERNA AND OMEGA, the 2nd book in Leanna Renee Hieber's exciting new series from TOR. It seemed only fitting since Halloween is just around the corner.  If you love the novels of the Brontes and Mary Elizabeth Braddon, if Northanger Abbey, Frankenstein, and Dracula are your jam, then you will love Leanna Renee Hieber.

Leanna Renee Hieber's gaslamp fantasy series continues and the action ramps up in Eterna and Omega.
In New York City, fearing the dangers of the Eterna Compound--supposedly the key to immortality--Clara Templeton buries information vital to its creation. The ghost of her clandestine lover is desperate to tell her she is wrong, but though she is a clairvoyant, she cannot hear him.
In London, Harold Spire plans to send his team of assassins, magicians, mediums, and other rogue talents to New York City, in an attempt to obtain Eterna for Her Royal Majesty, Queen Victoria. He stays behind to help Scotland Yard track down a network of body snatchers and occultists, but he'll miss his second-in-command, Rose Everhart, whose gentle exterior masks a steel spine.
Rose's skepticism about the supernatural has been shattered since she joined Spire's Omega Branch. Meeting Clara is like looking into a strange mirror: both women are orphans, each is concealing a paranormal ability, and each has a powerful and attractive guardian who has secrets of his own.
The hidden occult power that menaces both England and America continues to grow. Far from being dangerous, Eterna may hold the key to humanity's salvation.

And here is the exciting book trailer! 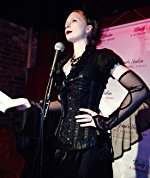 Leanna Renee Hieber is an actress, playwright, artist and the award-winning, bestselling author of Gothic Victorian Fantasy novels for adults and teens such as the Strangely Beautiful, Eterna Files and Magic Most Foul sagas. She grew up in rural Ohio inventing ghost stories, graduating with a BFA in Theatre and a focus in the Victorian Era from Miami University. She began her theatrical career with the Cincinnati Shakespeare Company and began adapting works of 19th Century literature for the stage. Her novella Dark Nest won the 2009 Prism Award for excellence in the genres of Futuristic, Fantasy and Paranormal Romance. Her debut novel, The Strangely Beautiful Tale of Miss Percy Parker (Strangely Beautiful series) hit Barnes & Noble's bestseller lists, won two 2010 Prism Awards (Best Fantasy, Best First Book), the 2010 Orange County Book Buyer's Best Award (Young Adult category) and other regional genre awards. The Perilous Prophecy of Guard and Goddess won the 2012 Prism Award (Best Fantasy). Books one and two are now available as STRANGELY BEAUTIFUL in a revised, author-preferred editions from Tor/Forge. DARKER STILL: A Novel of Magic Most Foul, hit the Kid's/YA INDIE NEXT LIST as a recommended title by the American Booksellers Association and a Scholastic Book Clubs "highly recommended" title. Leanna's short fiction has been featured in anthologies such as Willful Impropriety: Tales of Society and Scandal, "Too Fond"; a short story on Tor.com, "Charged" in Queen Victoria's Book of Spells and the Mammoth Book of Gaslight Romance. Her new Gaslamp Fantasy series THE ETERNA FILES, is now available from Tor/Forge. Her books have been translated into many languages and have been selected for multiple book club editions. Leanna is a member of the Science Fiction and Fantasy Writers of America, Mystery Writers of America and International Thriller Writers. She is proud to be a co-founder of the original Lady Jane's Salon Reading Series in New York. Leanna was named the 2010 RWA NYC Chapter Author of the Year. A member of Actors Equity Association and SAG-AFTRA, Leanna has been featured in film and television on shows like Boardwalk Empire. She loves nothing more than a good ghost story and a finely tailored corset, wandering graveyards and adventuring around New York City, where she also works as a ghost tour guide. Active on Twitter @leannarenee and Facebook.com/lrhieber, more information as well as free reads, author resources, links to her art and Etsy store and more can be found at leannareneehieber.com

This giveaway is only open to US residents.  Contest ends on October 30th at 12 noon.

The winner will be announced on October 31st!