September Book of the Month: ETERNA AND OMEGA by Leanna Renee Hieber 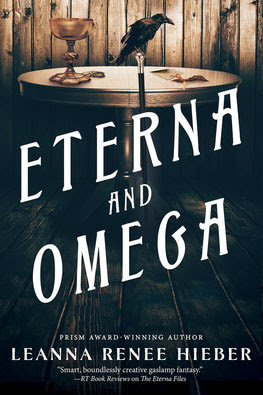 Leanna Renee Hieber's gaslamp fantasy series continues and the action ramps up in Eterna and Omega.
In New York City, fearing the dangers of the Eterna Compound--supposedly the key to immortality--Clara Templeton buries information vital to its creation. The ghost of her clandestine lover is desperate to tell her she is wrong, but though she is a clairvoyant, she cannot hear him.
In London, Harold Spire plans to send his team of assassins, magicians, mediums, and other rogue talents to New York City, in an attempt to obtain Eterna for Her Royal Majesty, Queen Victoria. He stays behind to help Scotland Yard track down a network of body snatchers and occultists, but he'll miss his second-in-command, Rose Everhart, whose gentle exterior masks a steel spine.
Rose's skepticism about the supernatural has been shattered since she joined Spire's Omega Branch. Meeting Clara is like looking into a strange mirror: both women are orphans, each is concealing a paranormal ability, and each has a powerful and attractive guardian who has secrets of his own.
The hidden occult power that menaces both England and America continues to grow. Far from being dangerous, Eterna may hold the key to humanity's salvation.

I don't often feature books (fiction or non-fiction) that isn't about a Scandalous Woman from history but I'm making an exception this month because Eterna and Omega (book 2 of The Eterna Files) is such a special book. Full disclosure, the author is a very good friend of mine, and I have the joy of seeing her grow from a newly published author to an award winning multi-published and accomplished novelist.  The Eterna Files series deals with a supernatural arms race between the United States and the United Kingdom. These books have everything, action, adventure, the paranormal and even some smooching. Leanna is an accomplished actress and playwright so her characters are three dimensional, fully formed that just leap off the page. If you love the Victorian era or the Gothic novels of Charlotte Bronte or Edgar Allen Poe, you will love this series. However, I would suggest that you start with the first book The Eterna Files which is now out in paperback. The series does have a cast of thousands but it is to Leanna's credit that it never seems overwhelming or confusing.

You can also check out her other novels on her website.