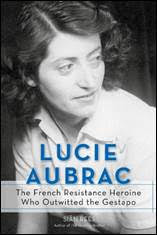 The next few months mark the 72nd anniversary of the liberation of France by Allied troops, which makes it a perfect time to be talking about Lucie Aubrac and other members of the French resistance who fought their Nazi occupiers for years until the Allies arrived. As one of the founders and leaders of Libération-Sud, Aubrac not only helped to distribute the underground newspaper Libération during World War II but also served as a courier, arms carrier, and saboteur. Her time under the Vichy regime was like something from a John Le Carré novel, involving disguises, swapped suitcases, and clues left in crosswords. Aubrac, working under the last name Montet, even managed to fool SS officer Klaus Barbie, infamously known as the “Butcher of Lyon,” to help her husband skirt certain death. British and American propaganda turned her exploits into the stuff of legend, and she was revered in her country for decades, but it all nearly ended in 1983, when she and her husband found themselves accused of secretly aiding their most-hated enemies. Lucie Aubrac helps parse out exactly what the couple’s actions and motivations were during the war while offering a thrilling portrait of a brave, resourceful woman who went to extraordinary lengths for love and country.

Here is a short excerpt from the book:

As a founder and leader of Libération-Sud, an arm of the French Resistance during World War II, Lucie Aubrac ran guns and messages, committed acts of sabotage, and multiple times faked her identity to helped others escape from Nazi POW camps. In the first half of her new book, Lucie Aubrac: The French Resistance Heroine Who Outwitted the Gestapo, Siân Rees details these exploits, including the two different times that Lucie rescued her own husband, Raymond. Below is an excerpt from the book detailing the first rescue operation, when Lucie (operating under the last name Samuel) traveled to Sarrebourg with a plan to get Raymond sick enough to be sent from prison to a hospital—from which she could sneak him away.

Still in Vannes, Lucie Samuel had had no news of her husband for weeks. She passed her first birthday as a married woman as she had done her first Christmas: alone and frightened, not knowing where her husband was, or even if he was still alive. Her parents-in-law knew no more than she did; it seemed nobody had information about their men. Some semblance of ordinary life had to continue, nevertheless, as millions of people waited for news. However bewildered and frightened teachers and pupils were with foreign soldiers in the streets and fathers, brothers, and husbands who had vanished, the girls and boys who had been working toward their baccalauréat had to sit their examination.

Bravely, Lucie contacted the German authorities in Vannes, persuading them to release four French officers from the nearest internment camp to form the examination jury. She was enraged when all four refused to seize the opportunity to escape; had they no courage, no principled determination to resist defeat? Term had ended by the time she finally received a card from the Red Cross at the end of July, with a note that her husband was confined to a barracks in Sarrebourg, converted to a prisoner-of-war camp. He had written the card on her birthday:

Nothing is more monotonous, my love, than life in camp. More than the lack of comforts and the terrible food, it is the false and contradictory reports which weigh on the thousands of poor blokes who are here and who see no hope on the horizon. . . . When I leave here, I will go to Dijon, and I will find you, and we will choose what must be done, won’t we. I hope you are very well, and ready for our future life. And this evening, your birthday, my thoughts will be entirely with you. Raymond.

With most of France lapsing into the stunned inactivity known as attentisme—waiting to see what would happen—Lucie Samuel went into action. She had no more faith than her husband that the Nazis would soon let their French prisoners go home, and she knew that if Raymond were transferred to a prisoner-of-war camp in Germany his Jewishness would put him in terrible danger. He had to escape immediately, and Lucie was not a woman who waited for other people to step in and take care of things. She would rescue him herself.

Once again she crossed France, traveling in even more dangerous circumstances than she had done the previous November, for the roads were blocked not only by refugees but also by the German troops fanning out across a traumatized country, ramming home the fact of their victory as they entered town after town in sleek, gray-green, seemingly endless processions. Single-minded in her determination to rescue Raymond, Lucie had come up with a simple plan: she would engineer her husband’s transfer from barracks to hospital, then smuggle in a disguise to facilitate his escape. In Champagne, she stopped off to find Raymond’s brother, Yvon, in the military hospital to which he had been posted. Yvon provided her with a drug guaranteed to provoke fever, and on she went, against the current, traveling east as everyone else traveled west, until she reached Sarrebourg and begged permission to see her husband. There was a brief, charged contact between prisoner and visitor—it was the first time they had seen each other since Paris in May—the drug was passed from one to another, time was called, and a couple of days later a heavily sweating Raymond was transferred to the hospital. Visiting as the anxious wife, Lucie produced the cap and suit of workman’s blue overalls in which he would escape. If it was a simple plan, it was also a terrifying one for Raymond, who was more frightened than he had ever been in his life—hiding next to the garden fence was easy enough, but he was all too aware that if the nearby guards saw him during the moment it would take to haul himself over, their bullets would not miss. After what seemed like hours of gut-cramping hesitation, he pulled himself up, threw himself over the top, and fell into the street below, where Lucie was waiting.

Excerpted from Lucie Aubrac: The French Resistance Heroine Who Outwitted the Gestapo, by Siân Rees, with permission from Chicago Review Press. Copyright (c) 2016, all rights reserved.