Vanessa and Her Sister - A Scandalous Review 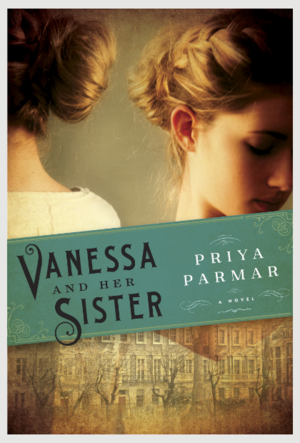 My thoughts:  I read Priya Parmar’s first book EXIT THE ACTRESS when it came out in 2011, and was bowled over by her talent.  Yes, I had a few quibbles with her portrayal of Nell Gwynn (I had a hard time believing that she was illiterate and somehow never learned to read during her years as an actress. I found that a little far-fetched), but I thought the book was an excellent peek backstage at what it was like to be an actress during the Restoration.  You could just smell the greasepaint and the unwashed flesh!

When I saw on Net Galley that she had written a new novel about Vanessa Bell and her sister Virginia Woolf, I immediately requested it.  Most of what I know about the Bloomsbury Group has been gained through watching films like Carrington (Emma Thompson brilliant as always as Dora Carrington and Jonathan Pryce as Lytton Strachey) and The Hours, as well as reading brief biographies of the artists and writers who populated the group.  I find them endlessly fascinating, in the same way that I find the radicals and artists who lived in Greenwich Village at the time fascinating. So this book was definitely going to be on my TBR pile.  I finally downloaded it this past week and just devoured it over the weekend.

The book opens in 1905, Vanessa and her siblings have just sold their childhood home and moved to Bloomsbury which was the equivalent of moving to Williamsburg before it became hip. Their father has just died, and Virginia has recently recovered from a breakdown that almost shattered the family. The book is told mainly through Vanessa’s journal, interspersed with letters from Virginia to her friend Violet, Lytton Strachey to Leonard Woolf who is in Ceylon (Sri Lanka) and letters from Roger Fry to his mother.  This choice makes the book feel very personal and intimate as if the reader found an old box of family mementos in the attic.  It’s the perfect book to read on a rainy day with a hot cup tea beside you as you dip into the lives of Vanessa, and her siblings.

Although one could categorize the Stephen family as upper middle class, they have deep roots in the literary and artistic community.  Their late mother was the niece of Julia Margaret Cameron, their father’s first wife was the daughter of William Makepeace Thackeray.  Their father, Leslie Stephen, was English author, critic and mountaineer! Reading this book reminded me of the time that I went to visit 18 Stafford Terrace which is the home of a Punch cartoonist who is like the great grandfather of Lord Snowden.  I could just see Vanessa and Virginia racing up and down the stairs.

There is an overwhelming sense of loss in the book, of the family members (their mother and older sister Stella, their father) who have passed on.  Although the book is narrated mainly by Vanessa, there are times when Virginia Stephen threatens to take over the book, just as in real life she threatened to take over her sisters.  Her prickly personality, at times loving, other times needy, her charm and her brilliance come across in the book.  She’s that friend who you love but you need take mini-vacations from if only to save your own sanity.  It would too easy to cut Virginia some slack by pointing out “Well, she’s mentally ill, she doesn’t know what she’s doing.”  Parmar never excuses Virginia’s behavior. By the end of the book, I was #TeamVanessa all the way.  I cheered her for freeing herself from a marriage that was not fulfilling her, with a husband who could so nonchalantly fall under her sister’s spell.  Particularly after he had spent such a long time wooing Vanessa and trying to get her to marry him. I confess I wanted to smack Clive Bell many times over the course of the novel. Talk about misrepresenting who you are! He completely blindsides Vanessa with this actions.  One of my favorite characters in the book was Lytton Strachey, as he was in the film Carrington. What I found amazing, and it's one of the things that I had forgotten, was just how incestuous a group they were. It seems like everyone in the book, at some point or another, slept with Duncan Grant.  He is the one character that I never felt that we got to know in the book.  He sort of danced on the periphery, breaking hearts left and right.

I never wanted this book to end, as each page led me to the last page, I kept hoping that miraculously the book would continue. Parmar’s writing is so evocative of the period and the emotions of the characters.  Vanessa and Virginia, their friends and family, felt like real, living, breathing people.  Not just characters from a biography or a history book.  I can’t tell you how many times I fell down the rabbit hole of Wikipedia while reading this book because I kept wanting to know more.


If your friends want to try historical fiction, but they don’t know who to read, I would suggest giving them Parmar’s book as an example of the best of what historical fiction has to offer.  I can’t wait to read Parmar’s next book. I just hope we don’t have to wait three years to do so.