The Lives and Loves of Frida Strindberg

April 16, 2014
“Life is a cruel banquet. You pay for food and board with your blood,” Frida Uhl Strindberg. 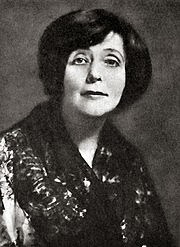 I was tweeting while watching the first episode of the new series Mr. Selfridge on PBS a few weeks, when Evangeline Holland from Edwardian Promenade mentioned that the character of Delphine Day might have been inspired by Frida Strindberg who opened the Cave of the Golden Calf in London in 1912.  I immediately looked Frida up on Wikipedia to see if she was one of the playwright August Strindberg’s wives. Bingo! So of course I went on a research binge to find out more about her. In the end, while I admired her courage and her intelligence, she must have been an incredibly difficult woman.

Her biographer, Monica Strauss, points out that Frida was ill-equipped for the life that she pursued. Higher education was not an option for her. While her father had set her up in a career in journalism, it was never meant to be a career. It was just a temporary measure until she eventually married and had children. He never realized that, in a sense, he’d opened Pandora ’s Box. Having tasted freedom and independence, Frida was reluctant to give it up. When Frida pursued the same sexual freedom as a man, she was condemned for it. 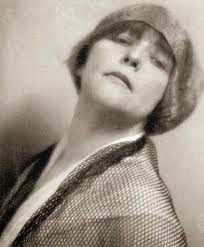 Frida Strindberg was born Frida Uhl on April 4th in 1872.  Her father, Friedrich Uhl, was the editor and drama critic of the Wiener Zeitung, one of the oldest, still published newspapers in the world, at the time it was the official government newspaper in Austria. Her father championed progressive ideas and writers, but not in his daughters. He expected them to live conventional, middle class lives, with no scandal. Frida came from a broken home. Her parents had an arranged marriage which broke up discretely when she was 7.  Her parents marriage had been an attempt to gloss over some of the more unsavory elements of their backgrounds. Although she converted when she got married, Friedrich’s mother was born Jewish. Frida’s mother Maria had been born illegitimate.

After the separation her mother moved back to the country, while her father lived in his office at his newspaper.  While her older sister was off at convent school, Frida spent two years living alone with a governess in Mondsee outside Vienna.  Left to her devices, she spent hours in the library, devouring books, developing a mind of her own.  She saw very little of either of her parents during her childhood. After leaving school, Friedrich arranged for her to have a job reviewing books and theatre in Munich. Although Frida lived with a family friend, she had been given a taste of freedom. Although it probably wasn’t in his plans, her father gave Frida a great gift, the ability to fend for herself. This knowledge made her stubborn, it gave her confidence, and it made her life difficult.  Soon Frida was off to Berlin in pursuit of the married playwright her father had introduced to her the previous summer. It was the beginning of her life long obsession with difficult geniuses. Starved of affection by both parents, Frida would often find herself attracted to older men. 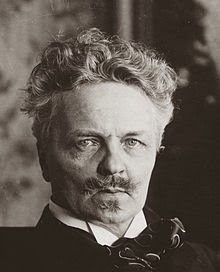 It was in Berlin, that she met Strindberg. The playwright was 43, recently divorced, with three children he hardly saw.  He was not only broke, but suffering from writer’s block and depression. He had published a semi-autobiographical novel about his first marriage that had caused a scandal in Sweden when excerpts were published in one of the newspapers. Not exactly son-in-law material. Frida was twenty, beautiful, headstrong and independent. While Frida had an ‘Electra’ complex; Strindberg’s issues were a bit more complex. Frankly, as far as I’m concerned, he was a misogynistic bastard. Although he was attracted to strong, independent women, he also felt emasculated and threatened by them. He longed to find a woman like his mother who had died when he was a young boy.  When Frida tried to pay the check (she had invited him out to dinner), he freaked out.  He once told Frida’s sister that he didn’t think of her as a woman because she was clever. Clearly Frida and Strindberg were two people who should never have gotten married.

The marriage was immediately in trouble. On their wedding night, Strindberg tried to strangle Frida in his sleep, thinking she was his first wife. When Frida tried to help promote Strindberg’s career by writing articles about his work, he resented it.  He became verbally abusive, accusing her of being a whore. Then Frida discovered that she was pregnant. Given their precarious financial situation, Frida considered abortion which angered Strindberg. Since Strindberg didn’t want Frida to work, they had to move in with her grandparents. A move to Paris didn’t help mend the cracks in the marriage.  Strindberg wanted her to be a wife and mother.  Any ambition to be more would not be tolerated. The couple separated after 18 months and the marriage was eventually annulled. Strindberg would never see Frida or their daughter ever again.
Now 24, Frida moved back to Munich, determined to somehow make a living. Her daughter Kerstin was left behind in Austria with her mother. 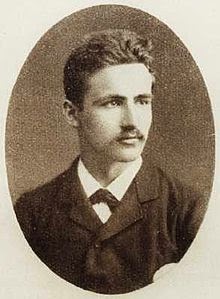 On the rebound, Frida fell into the arms of another playwright Frank Wedekind, author of the controversial plays ‘Spring Awakening’ and the Lulu plays (Pandora’s Box).  His relationship with Frida was his first with a woman of his own class. That should have been her first warning. Just as she did in her relationship with Strindberg, Frida threw herself into promoting Wedekind’s career. As a thank you, Wedekind knocked her up.  So now Frida could add unwed mother to her resume.  When her son was born she named him Max Friedrich. Since he was conceived before her marriage to Strindberg was legally over, Frida could legally give him her husband’s last name. Although Frida meant well, this caused her son problems in later life.

Her affair with Wedekind now over, Frida dropped her son off with her mother, and continued her career in Munich. Freed from the shackles of marriage and motherhood, Frida pursued her new life with a vengeance.  Over the years, she constantly reinvented herself, from cultural impresario to art dealer to scenario writer.  With her lover, the poet Hanns Heinz Ewers, she started the first German cabaret in 1900. For a time, she was closely involved with several writers of the Young Vienna movement, such as the poet Peter Altenberg and the journalist Karl Kraus, whom she convinced to sponsor a reading of Wedekind's Pandora's Box.

There were more love affairs, but Frida was never able to find that one man who could truly understand her.  She would try to bind her lovers to her by making herself useful to them by promoting their work. But while they were happy to avail themselves of her help, in the long run, her difficult geniuses chose less complicated women.  Her affair with the writer Werner von Oesteren was a particularly stormy period in her life. On more than one occasion, she threatened him with a gun. In 1905, she sued him for harassing a detective that she had hired to follow him.  In London, she pursued the painter Augustus John relentlessly, until he brutally broke off the relationship.

She seems to have never really gotten over her marriage to Strindberg. Her discovery that her mother had interfered with their relationship behind her back seems to have softened her feelings towards him.  In her eyes, he almost became a saint after his death. From hating and resenting him, she created an idealized image of her ex-husband that little to do with reality. After his death in 1912, and her move to New York in 1914, Frida continued to promote his work, even directing a production of one of his plays. Later on, she wrote the memoir Marriage with Genius which was published in 1937.  Her relationships with her children were strained. Years would go by when Frida neither saw her children nor wrote to them. Years later, Frida tried to make up for the years of neglect, particularly with Kerstin but it was too late. She would never have a particularly close relationship with either of her children.

Returning to Austria after the First World War, Frida spent her last years in her family's summer residence at Mondsee and died there on June 28th 1943 at the age of 71.

Unknown said…
The quote at the top drew me in, to read the entire story of her life... it's so interesting! I'm curious about the show that you mentioned and the character Delphine? I'll have to look that up and find out more about it!
April 16, 2014 at 12:26 PM