My Night with Madame Jumel 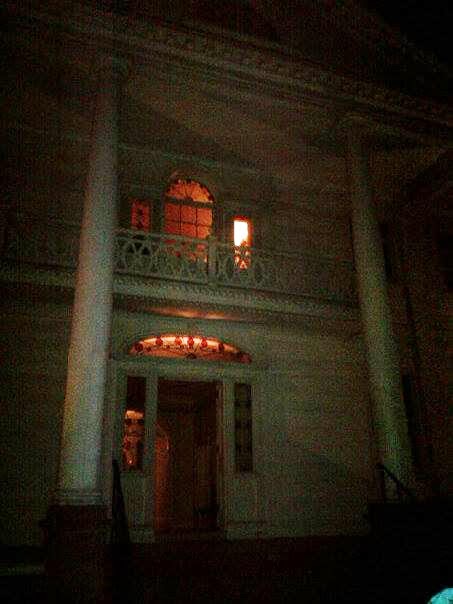 The Morris-Jumel mansion at night taken by Leanna Renee Hieber
Last November, I decided to do something different for my birthday. Instead of going out for dinner or having drinks at one of my favorite bars, I decided to invite a few friends to join me for a paranormal sleepover at the Morris-Jumel mansion here in Manhattan. The mansion, which is located less than twenty blocks from my house, is one of the oldest structures in Manhattan. It is a jewel of a museum, a pre-revolutionary mansion once owned by Roger Morris, a loyalist who left New York to return to England. The house was then used as George Washington's headquarters for a few months before the British took the city.

Later the mansion was bought by a wine merchant by the name of Stephen Jumel, who lived in the mansion with his much younger wife Eliza. You can read guest blogger Audrey Braver's post on Eliza Jumel Burr here. Eliza Jumel was a piece of work to say the least. Not many people know her name now but she was the subject of several historical novels over the years. I'm amazed that there hasn't been a major biography about her. I've become a little obsessed with her myself.

The paranormal sleepover was the night of my birthday, November 2nd, which also happens not only Marie Antoinette's birthday, was also All Soul's Day or the Day of the Dead. It was the perfect night, when the veil between the living and the dead is supposed to be at its thinnest.  I didn't own a sleeping bag, (I'm a total Bloomingdale's camper), so I moseyed on over to Target to pick one up. For the grand sum of $21, I was fully equipped for my night in the mansion.

The evening started at around 8 pm. It was kind of eerie walking up to the mansion from Broadway. I'd only ever been up to the mansion in the daytime. I could imagine horse drawn carriages pulling up the drive to drop guests off for an evening supper and dance at the mansion. Tea, coffee, and snacks awaited us. My friends, paranormal author Leanna Renee Hieber and her husband, and bookseller Stacey Agdern joined me for the adventure.

I've been fascinated by the paranormal since I was a child. I've done past life regressions (and no, I wasn't anyone famous!).  I watch Ghost Hunters and Ghost Adventures on TV. There have even been instances in my life that I can't explain, the feeling that my parents, who are deceased, watch over me.  So I guess you can say that I'm a skeptical believer. Still I wasn't sure that we were going to have any sightings at the mansion.

“Acoustic Archives” presented their findings from previous readings at the mansion. One of the docents then took us on a tour of the mansion, giving us details of the various sightings of Madame Jumel over the years. From there we went down to the kitchen and there's where the magic happened.  EVF meters were handed out for those of us who wanted to measure any paranormal activity.  There was a clear presence in the kitchen near where Stacey, Leanna and I were sitting.  I'm not kidding you, the meter went off the charts where we sitting on bench in the back, and when we moved to a different bench, the presence (whatever it was) followed us. And it was distinctly chilly where we were sitting which shouldn't have been the case given how many people were in the kitchen. Normally, the more people, the warmer the room. We weren't even sitting near the back door.

Eventually we joined the men (we had kicked them out earlier because  we thought they were inhibiting any women spirits who might be in the kitchen) upstairs in Eliza Jumel's bedroom. And that's when s*%t started to get real.  One of the guys from Acoustic Archives set up a flashlight in the middle of the floor.  The idea was that if there was any spirit or entity in the room they would answer our questions by making the flashlight flicker. Well Madame Jumel was quite talkative, (perhaps she knew it was my birthday and didn't want to disappoint me!) particularly when the subject of children was mentioned.  All of a sudden the flashlight went crazy. One of the stories that the docent told us was how Madame Jumel had appeared on the balcony of the mansion during a school visit. There was also a rumor that Madame Jumel had an illegitimate son during her years as an actress. After her death, a young man appeared claiming to be her son.  He went to court to try and overturn her will, trying to claim a portion of her estate.

Overall it was an exciting night although I'm a little old to be sleeping on hardwood floors, especially hardwood floors that are over 200 years old. Castles, Secrets & Legends on The Travel Channel recently did a segment on a séance that was held at the mansion in the sixties which you can see below:

Also, apparently Ghost Adventures also did a segment at the mansion but they haven't shown it yet. I'm interested to know if anyone has had any paranormal experiences while visiting a historic home or site.
Eliza Jumel Burr George Washington Morris-Jumel mansion

Unknown said…
Get the Plump Lips You’ve Always Wanted!
Perfect, Sexy Lips are Just a Step Away! There is not a woman on this planet who does not want full, sexy lips. The number of cosmetic procedures performed every year alone is proof of this! We lust after celebrities who have a sexy pout, and we try to imitate it by being a bit too generous with lipstick or even resort to painful collagen injections. Now, none of this is necessary anymore! You can give yourself fuller lips instantly with the CushyLips lip plumper and lip gloss.
March 5, 2014 at 1:53 PM