November 29, 2013
So REIGN has been picked up for a full season. You know what that means, more shenanigans at the court of Henri II like these last two episodes.  Sorry I'm late with the recaps but last weekend was the 50th Anniversary of Dr. Who so Mary, Queen of Scots fell by the wayside. 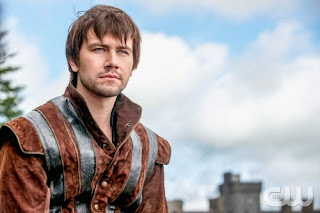 - Mary and Francis are so cute together you guys! They spend the first part of the episode snuggling and making out. I sure hope nothing comes between these two crazy kids!

- Uh oh, some blonde chick named Olivia shows up at court after almost getting killed in the Dark Forest. It turns out that she and Francis used to play 'doctor' in the boathouse until they got caught. She was whisked away to marry to someone else but it fell through because of that whole not being a virgin thing.

- Mary decides to be nice to Olivia instead of ripping her hair out until Olivia admits that she's back to steal Francis.

- Mary decides to that Olivia needs to leave court to stay with a respectable family in Paris to help repair her reputation. WTH?

- Olivia pleads with Francis not to send her away, telling him that if she can't marry him, she'll be happy to just be his mistress.

- Machiavella de Medici blackmails Aylee into giving her a look at Mary's letters to her mother. If she doesn't, she'll tell Mary that Aylee is a klepto.

- Francis told Mary at the Harvest Festival (seriously there is a festival every week on this show!) that Olivia was not going to be going away after all. Oops! They argue and Mary does what any woman would do in this situation. She gets drunk and makes out with her fiancé's cuter half-brother.

- Catherine de Medici reveals that she wants Olivia to trap Francis into marrying her by getting pregnant.

- Mary reveals that knows that Catherine is reading her letters, in fact, she planned the whole thing with Aylee.

- Greer and Kitchen boy made out. What do you want to bet he's some prince or noble who is hiding in the royal kitchen for REASONS.

- Kenna told off Mary after Mary tried to warn her about getting involved with the King. Ooh, Kenna, you are going to be so sorry when Diane de Poitiers and the Queen join forces to get rid of you.

- The pagans in the Dark Forest are mad because Bash rescued some dude from having all his blood drained from him. He now has to pay be sacrificing some else's life. Who could it be?

This week's episode was entitled Scotland although it had nothing to do with Scotland whatsoever.

- Mary and Bash had an awkward moment recalling their make-out session from last week.

- A giant, bloody stag's head was left in Mary's room while she was sleeping as a warning from the pagans/heretics who live in the dark forest.

- It turns out that Diane de Poitier comes from a pagan family. She warns Bash that no one can find out their terrible secret.

- Mary and Catherine de Medici play good cop/bad cop with the servants. Mary promises that no one will be punished if they give information while Catherine tells them if they don't cough up information, she will burn their villages down.

- Kenna, one of Mary's ladies, invites her friends to the King's bedroom to celebrate her becoming his mistress. She gets upset when one her friends points out the entwined initials H&D in the floor. She has a hissy fit and demands that the King remove them.

- Bash releases a prisoner and takes him into the Dark Forest of Doom to flush out of one of the pagans/heretics who he kills as a sacrifice. On the way back to the castle, Bash pushes the prisoner off a cliff when it looks like he's going to spill the beans about what happened.

- The King complains to Diane de Poitier about Kenna's demands before making love to his former mistress.

- After Bash returns to the castle, Francis announces that he and Mary should see other people, as long as one of them isn't Bash. Meanwhile Francis finds Olivia and decides to play hide the éclair with her because this show is the worst.