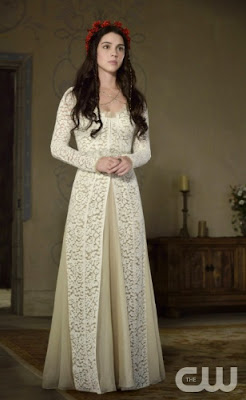 Just caught up with REIGN this morning. OMG you guys, so much drama! Archery contests, whipping boys, ghosts, intrigue, romance. Where do I begin?

- Tomas and Francis competed in an archery contest because a joust would have been too exciting I guess. Tomas cheated, and then gave Mary a favor of a pink rose. In front of everyone!

- Mary's uncle Claude de Guise showed up again to basically tell her stuff. This time it was to tell her that King Henri wasn't yet willing to end her betrothal to Francis.

- Catherine de Medici admitted to Mary that she wanted her gone, gone, gone.

- Francis, now that Mary was about to get engaged to another man, got all handsy and jealous.

- Lola flirted with a wounded Bash.

- Tomas showed his true colors by telling Mary every time she disobeyed him, Miguel the whipping boy, would be punished.

- Simon, Lord Westbrook, was accused of being a spy for the English and almost executed in the middle of a masquerade ball.

- Kenna aka Lady McSlutty told King Henri Horndog that she was ready to be his mistress but he told her that position was filled.

- Clarissa the ghost left Mary, Simon's seal which proved that he wasn't the guy the prostitute saw in the tavern after all, which meant he was innocent.

- The prostitute confessed that it was actually Tomas. OMG, I totally didn't see that coming!

- Bash and Francis united to prove that Tomas was a total SOB which culminated in an exciting fight in the woods! (No not really).

- Mary wore more cracked out fashions that have nothing to do with the period.

- Greer flirted some more with the servant boy from the kitchen.

- King Henri Horndog changed his mind and decided to make Kenna his mistress after all. Because Catherine emasculates him and Diane spends too much time shopping in Paris.

- Mary shocked the court by telling the King and her uncle that she would be leading the renegotiations for her betrothal to Francis.

- Nostradamus did absolutely nothing. (Seriously this show would be much more interesting if Catherine de Medici and Nostradamus were getting it on!).
Historical Notes:  Well, I was wrong about Claude de Guise, I assumed that he was her cousin, but he's actually her uncle.  The show has also been picked up for a full season which means that I will be recapping the show for another 18 episodes! It will be interesting to see if they actually do develop this love triangle between Bash, Mary and Francis that they promised.  At some point Mary and Francis will have to get married, the writers can't keep throwing ridiculous obstacles in their path.
Catherine de Medici Mary Nostradamus Queen of Scots Reign