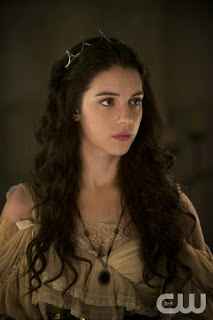 I want to apologize for my neglect of the blog lately. I've been in the midst of a job search, as well as taking a writing class and working on a new proposal for my agent.  Then Mercury in retrograde happened and most of my electronics stopped working including my cable which is why my recap of the CW's REIGN is so late.  I had to watch the episode on my computer since Time Warner Cable doesn't have the CW on demand and my cable is also out until tomorrow when the technician can finally come to fix and hopefully give me a new cable box.  So without further ado here is the recap and my thoughts about this week's episode of REIGN.  Just an FYI, there will be spoilers in this recap, so please don't read further until you have watched the episode.

When last we left Mary, Queen of Scots things, weren't looking so good. Someone attempted to poison her at the convent where she was living, then when she arrived at the French court she discovered that her fiancé was not so keen on getting married.  Unbeknownst to Mary, Nostradamus (played by Donald Sutherland's other son) predicted that a marriage to the young Queen of Scots would result in his death. Catherine de Medici was not having that, so she bribed/coerced one of Mary's men to drug Mary and then seduce her or make it look like she'd been seduced. Unfortunately for Colin, Mary never drank the drugged wine, so she was quite awake when he attempted to ravish her.  Poor Colin, who was the sweetheart of one of Mary's maids, Lola, was tortured and then beheaded.

This week's episode opens with a surprise *SPOILER ALERT* young Colin is not dead after all.  The wrong door was marked with an X and a petty thief was beheaded in his place.  A small creature wearing a white hood releases him from the wrack and helps him escape.  Catherine de Medici is not pleased.  This means that if Colin is found, he might just spill the beans that the whole plot was her idea. Oops!

Mary and Lola are of course thrilled that Colin isn't dead after all.  This means that he can be questioned and Mary can deal with his transgression herself.  Colin had managed to tell her that the threat to her life was at the French court.  Who could possibly mean her harm? To Mary's credit, she does suspect that her potential mother-in-law doesn't have the best of intentions.

Another one of the royal children is trotted out, this time it's the future Charles IX who has been betrothed to someone named Madeleine who is not important because he never ended up marrying her, if she existed at all. Madeleine is arriving in France and Mary decides to accompany the little royal groom along with Francis to greet her.  An English ship is spied off the coast and Mary gets all bent out of shape, thinking the English have come to get her. It turns out that the English ship was just helping out little Madeleine's ship.

Back at court, the English envoy named Simon (no last name, no title, nothing. Just Simon) makes veiled threats against Mary, warning her not to marry Francis.  Mary stands up for herself and puts him on notice. While Charles and his future bride are playing, the boy wanders off and Mary follows him. He tells her that he has a friend who is invisible but who seems to know all sorts of stuff. Her name is Clarissa.  Mary thinks that Clarissa is the same entity who warned her in the last episode.

Back in her rooms, Mary discovers a strange woman trying on her dress. The woman falls to the ground claiming to be poisoned. Mary runs off to get help but when she gets back the woman is gone. There is a secret passage off of Mary's room but the woman is not there. Francis is most upset that Mary's guards were no where to be found.  Mary decides to ask Clarissa what she knows, using marbles that she found earlier.  The answer is unclear but Clarissa leaves a key for Mary. When Mary uses it, it turns out not to lead to Catherine de Medici's room but to Simply Simon's room. Mary enters his room and discovers him in flagrante delicto with the blonde woman that Mary thought was poisoned. Simon admits his dastardly plans and confesses that Catherine de Medici is involved.

There's some discussion about Mary Tudor dying, which would leave the throne of England vacant, and that some would look to Mary as Queen since Elizabeth was considered illegitimate. Mary rejects the English crown and demands that England leave Scotland alone. That's about as historical as this episode got folks. Meanwhile poor Colin ends up dead in the woods.  Bastian finds him and reveals that he speaks an ancient Celtic language which surprises his brother Francis.  It turns out that Catherine de Medici had Colin killed yet again, but this time she tried to make it look like the heretics in the woods did it.

So that's it for this week's episode. It was about as scintillating as watching paint dry. It's beginning to look like every week Catherine de Medici is going to try and find some way to either kill Mary or get rid of her some other way.  That's going to get old fast.  In an effort to say something nice, the costumes this week look like they came from Anthropologie and Stevie Nicks' closet. Seriously they are all over the place, the women's dresses look medieval and the men's costumes look vaguely 18th century. In one scene, Francis was wearing a multi-colored turtleneck and a vest.

There was also a hilarious moment when Mary and her maids wandered through the halls in their unmentionables to get breakfast which was left outside in the hallway for some reason.  Oh, and Diane de Poitiers was not in this episode, she was at the 'country house' which is pretty funny when you consider the 'castle' in which everyone is living is also in the country.  However, it is a very pretty castle.

I know I've harped on this before but the actual history of this period is so rich, and what the writers are making up is just terrible.  If they want court intrigue, about including Mary's French family, the Guises? The Guise family was incredibly powerful and well-connected. They should be at court trying to protect Mary, trying to force the marriage while Catherine de Medici tries to curb their power.  Instead of a fictional bastard son of Henri II and Diane de Poitiers, why not a Guise cousin as the third part in this fictional love triangle the writers seem determined to create?

Unknown said…
Bless you for actually watching! I got through the first episode and the half of this second episode. I had to turn it off. I'm not saying that shows need to perfectly re-create the past, but at least try to be accurate. I know some purists were heartily offended by "The Tudors" but "Reign" makes that show look like Masterpiece Theatre in comparison!

I just hate that so many teenaged girls are walking away with so many misconceptions about the period. It's completely irresponsible.
October 28, 2013 at 2:33 PM