August is for Austen 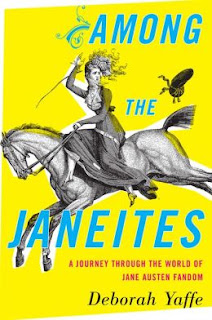 Here we are in the dog days of summer, or at least they are supposed to be.  Here in New York it’s been raining on and off for the past three days.  Just the kind of weather that makes you want to curl up in your apartment with a good book or movie.  This month, two Austen inspired projects have been released for those of us who either enjoy reading or watching romances set in olden times or who just adore Jane Austen.  Yes, August is for Austen, in 2013.


First up is the new non-fiction book AMONG THE JANEITES:  A Journey Through the World of Jane Austen Fandom by Deborah Yaffe which an enjoyable look at the Jane Austen fans who read her books religiously, belong to JASNA, love to wear the regency clothes, the very people that the new movie AUSTENLAND lovingly spoofs.  Along the way, she meets a Florida lawyer with a byzantine theory about hidden subtexts in the novels, a writer of Austen fan fiction who found her own Mr. Darcy while reimagining Pride and Prejudice, and a lit professor whose roller-derby nom de skate is Stone Cold Jane Austen.  Yaffe does a nice job of inviting the reader on her own personal journey with Jane Austen as well as the world at large.  My only quibbles with the book are that I wish she had gotten a chance to interview the creators of The Lizzie Bennett Diaries, or to examine a bit more of the explosion of Jane Austen sequels, prequels and alternative novels such as Lynn Shepherd’s MURDER AT MANSFIELD PARK or Stephanie Barron’s Jane Austen mystery series.  Most of the authors that she spoke went the self-publishing route although some were picked up by Sourcebooks who were the foremost publishers of Jane Austen paraliterature.  I took exception also to her calling some of the writers hacks. Given how much time it takes to write a novel, and to get someone to publish it, I think they should be patted on the back.
I did love that she spoke to the founders of The Republic of Pemberley.  I remember when I was first started re-reading the books and watching the various TV miniseries, the Republic of Pemberley was the only community where you could discuss the novels and Miss Austen.  I also loved that she focused on the early bloggers who focused not just on Jane Austen but her world as well.  If would have been nice if she had also mentioned the Channel 4 series REGENCY HOUSE PARTY as well.  All in all though, it was a lovely book and a love letter to Jane Austen.  This book would be a nice companion to Claire Harman’s earlier book JANE’S FAME: How Jane Austen conquered the world.


Last night I went to see a screening the film adaptation of Shannon Hale’s AUSTENLAND starring one of my favorite actresses Keri Russell as Jane Hayes.  I haven’t read the book on which the film is based. I do remember picking it up when it came out in 2007 in the bookstore but I put it down because I have a love /hate relationship with Jane Austen fan fiction. I did enjoy Laurie Viera RIgler’s book CONFESSIONS OF A JANE AUSTEN ADDICT which is more of a time travel novel.  Having now seen the film, I’m not sure that I want to go back and read the novel.   The film was cute and very well cast, the costumes were stunning particularly some of the ensembles that Jane Seymour wore as well as Keri Russell,  the stately manor was to die for, but there was something off about the film and I can’t quite put my finger on what it was. 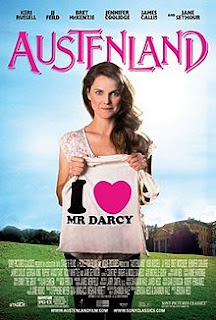 Perhaps it was the secondary characters in the film.  Jennifer Coolidge plays a variation on the usual over-sexed, not very bright woman of a certain age that she always plays.  I wasn’t quite sure why she was even at Austenland to tell the truth, since she didn’t know anything about Jane Austen nor had she read any of the books.  Jane Seymour plays the owner of Austenland but again I wasn’t sure what the purpose of her starting the project was about and if it was to capitalize on the craze for all things Austen she did a pretty slap-dash job of it.  JJ Feild plays Henry Nobley who is the Darcy character of the piece.  He’s handsome but not too handsome, and he wears the costumes well.  I did like his eventual backstory when it was revealed.


There were some amusing scenes showing the behind the scenes shenanigans with the actors who are participating in the week at Austenland, and it was amusing that Keri Russell’s character bought the cheapest package so she has to ride on the outside of the carriage and stay in the servant’s quarters.  They changed the impetus for her going to Austenland.  In the book, her great-aunt books her the trip.  In the movie, Jane decides to book the trip so that she can get over her Austen obsession once and for all. I have to say that I liked this change because it made Jane more active.  She knows that she has a problem and she's trying to deal with it.  Of course, she has a sassy but wise best friend who constantly berates her about how she's wasting her life dreaming about Darcy. No romantic comedy would be worth it's salt without the down to earth best friend.
I did enjoy the film but I’m not sure that it was worth paying $14.50 for it.  It’s more the type of thing that you would expect to see on the Hallmark Channel or Lifetime.  I did like that the movie was written, directed and produced by women.  Shannon Hale co-authored the screenplay with the director Jerusha Hess, and the film is produced by one Stephanie Meyer who wrote a little trilogy about vampires.  I would suggest that unless you really are dying to see this movie on the big screen, I would wait and rent it when it comes out on DVD or watch in on-demand.
Jane Austen