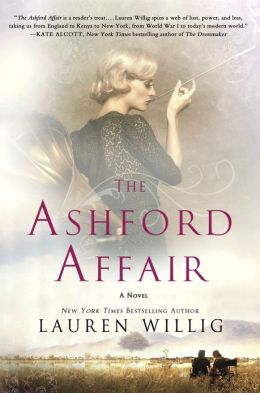 
I have to preface this review by saying that I have had the privilege of getting to Lauren over the past five or six years through RWA conferences and Lady Jane’s Salon. I’m also huge fan of her Pink Carnation series, particularly A Very Turnip Christmas which for some reason she insists on calling The Mischief of the Mistletoe.  She’s not only a fantastic writer, but she’s also an extremely nice person, witty and intelligent.  And if that weren’t bad enough, she wears ridiculously cute dresses.  Seriously, even at eight months pregnant, she’s still adorable. Oh and she bakes as well. It’s absolutely too, too sick-making as Lady Beatrice Gillecote would say. So when I had the opportunity to read Lauren’s first stand-alone historical novel, I couldn’t say no.  Especially once I learned that the book was set during the 1920’s in England and Kenya.  As I’ve mentioned numerous times on the blog, I’m absolutely nuts about the Roaring Twenties.


The Ashford Affair is actually two intertwined stories, a multigenerational tale that spans almost one hundred years.  In 1999, Clementine Evans, known as Clemmie to her family and friends, is an associate in a large Manhattan firm, just shy of making partner.  At the age of 34, she has finally achieved almost everything she’s been working towards—but now she’s not sure it’s enough. Her long hours have led to a broken engagement and, suddenly single; she feels her messy life crumbling around her. At her Grandmother Addie’s ninety-ninth birthday, her step-cousin Jon lets slip hints about a long-buried family secret, leading Clemmie on a journey into the past that could change everything that she thinks she knows about her family. As her life begins to unravel, she discovers secrets about Addie that rock her world.


The second story involved Clemmie’s grandmother Addie.  Orphaned in 1906, Addie is sent to live to with her aunt and uncle into the grand English house called Ashford Park. Scared and lonely, Addie is befriended by beautiful and outgoing cousin, Beatrice. Although they are as different as night and day, Addie and Bea are closer than sisters, partners in crime.  For a while, it seemed like nothing could come between the two of them. But World War I not only changes the face of Europe irrevocably, but also the relationship between the two cousins. Beatrice makes her family proud by landing a Marquess, but her marriage quickly unravels. Addie secretly finds fulfillment in her new job working for the Bloomsbury Review. One day, she becomes reacquainted with Frederick Desborough by chance.  Addie falls hopelessly in love, but Frederick has been emotionally scarred by his experiences in the war.


I would spoil the rest of the book by revealing more, but I think that one can guess what happens next.  The action soon shifts to Kenya, where Bea is now living after creating a huge scandal in London.  Addie is collateral damage to her cousin’s actions, cut off from her family, and forced to fend for herself. After six years, Bea has invited Addie out to Kenya. Addie sees the trip as her last chance for adventure before she settles down with her rather staid fiancé, a lecturer at King’s College.
I loved a great deal about this book, and what I didn’t love, I liked. Addie had my heart from her the moment that she runs and hides in the closet when her new relatives come to get her. She is a keen observer, with a sharp wit that pops out occasionally.  She grew up in a loving, warm but rather bohemian family in Bloomsbury. It turns out that her father married beneath him to a woman who wrote rather racy novels for the time.  From the very beginning, Addie is made to feel unwanted by her Aunt Vera, who frequently mutters about how blood will tell. When Addie arrives at Ashford Park, her cousin Beatrice who is only a year or so older, immediately adopts her as one would a stray dog. Her older sister Dodo is obsessed with her horses, and younger sister Poppy is a mere toddler when the book opens. Beatrice is not only a free spirit but also somewhat spoilt. As a member of the aristocracy, she’s used to getting her own way and damn the consequences. But she’s also kind to Addie, the only one in the family who makes the effort to treat her as such. How could Addie not love her?

Because Addie is the poor relation, she’s afforded a bit more freedom than her cousin. During the war, Addie allowed to become a nurse, while Beatrice is not.  No one expects Addie to make a good marriage, even Beatrice assumes that she will end up marrying a country vicar. Lauren has a fine eye for not only historical detail but for social commentary as well. Through Addie’s sharp eyes, the reader gets an intimate view of The Bright Young Things who populated London just after the war. Addie only sees the waste of too many people drinking and dancing their lives away instead of taking their experiences during the war and using them to make a difference.  At times, she can come off as a bit of a prig. Like Bea, one wishes that Addie would loosen her girdle a bit, and get in the swing of things. The story gets even more complex when the action moves to Kenya. Addie finds that the British transplants have just brought the party to Africa. While Bea can come across at times as shallow and glib, Willig gives the reader a glimpse into a woman who has been brought up to be beautiful and decorative, and then finds out that it’s no longer enough.

When the story moves into the late 20th century, that was where it lost me. Unfortunately I didn’t find Clemmie’s story nearly as interesting or as absorbing as Addie and Bea. In fact, the little glimpses that the reader is given of Clemmie’s mother Marjorie and her sister Anna, I found more compelling.  I would have loved to have read more about their lives after the events in Kenya. Maybe there were just too many similarities between Clemmie’s character and Addie. Both women felt like outsiders in their own families, both women have a bit of sharp wit but Clemmie was a little too much of a sad sack for me. I found myself skimming through the sections set during 1999/2000 to get back to Addie and Bea’s story. I wanted to actually see Addie’s office at The Bloomsbury Review not just hear about, and I wanted more insight into Addie and Frederick’s blossoming relationship in Kenya. Although I totally believed in their love story, I wanted to see more of it.


Still there were some moments that I enjoyed, particularly Clemmie arriving in London, tired and worn out, and having to immediately run to a meeting without getting a chance to change. I’m sure quite a few readers could relate to that. I also liked the brief glimpses that we got of her relationship with her mother, and the realization that even her mother had more of a social life than she did.  Frankly I hope Clemmie found a hobby or something to lighten her up a bit.
The book is ultimately a love story, not just between Addie and Frederick or Clemmie and Jon, but Addie and Bea.  It’s a story of female friendship, and how easily it can be shattered through jealously, neglect, and growing apart, but also the strength of that friendship, how it can ultimately be repaired.


Verdict:  This stand-alone is the perfect introduction to Willig’s writing for those readers who might be a bit daunted by The Pink Carnation series. A richly textured historical novel that sweeps the reader from post-war London to the Happy Valley in Kenya and then to millennium era New York City. Willig weaves a stunning tale of sex, secrets and sisterhood. I'm looking forward to seeing what Lauren comes up with next. I've heard rumors that involves the VIctorian era and the Pre-Raphaelite brotherhood.
1920's London Happy Valley Set Kenya Lauren Willig The Ashford Affair