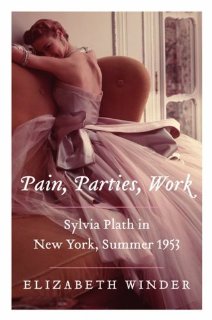 
How acquired:  Through the Publisher


What it’s about:  In May of 1953, a twenty year-old Plath arrived in New York City, the guest editor of Mademoiselle’s annual College Issue. She lived at the Barbizon Hotel, attended the ballet, went to a Yankee game, and danced at the West Side Tennis Club. She was supposed to be having the time of her life. But what would follow was, in Plath’s words, twenty-six days of pain, parties, and work that ultimately changed the course of her life.


Thoughtful and illuminating, featuring line drawings and black-and-white photographs, Pain, Parties, Work: Sylvia Plath in New York, Summer 1953 offers well-researched insights as it introduces us to Sylvia Plath—before she became one of the greatest and most influential poets of the twentieth century.
My thoughts:  Like most teenage girls, I read Sylvia Plath’s The Bell Jar when I was in high school.  It was a rite of passage, the female equivalent of reading The Catcher in the Rye.  I remember identifying with Plath’s protagonist Esther, as I’m sure most girls my age did back then.  I’ve been fascinated with Sylvia Plath since then, less so her poetry than who she was as a person and her tumultuous marriage to Ted Hughes. Maybe it’s the fact that she’s a Scorpio (I swear one day I’m going to write a book and the only theme is going to be that all the women are Scorpios!).
2013 is not only the 50th anniversary of the publication of The Bell Jar but also the 50th anniversary of Plath’s death (February 11, 1963).  To mark the occasion, several new biographies have been published about the short life of the poet, including Pain, Parties and Work: Sylvia Plath in New York, Summer 1953.  While the other biographies deal with Sylvia’s early life before she met Ted Hughes (Mad Girl’s Love Song: Sylvia Plath and LifeBefore Ted), as well as the scope of her life and career (American Isis: The Life and of Sylvia Plath), Pain, Parties and Work specifically deals with the summer of 1953 when Sylvia won a coveted guest editorship at Mademoiselle Magazine. Her experiences that summer inspired her only novel.  Back in the 1950’s, winning a guest editorship of the annual College issue was a dream come true for many girls.  For many it was their first experience of life in a big city. Nowadays, internships are commonplace, a necessary rite of passage if you hope to land a job after college but back then internships for something much more extraordinary.


The book is as much a cultural history of young women in the 1950’s as it is a biography of Plath.  The book is filled with insights from Plath’s co-guest editors, who ranged from the ages of 18 to 21 during that summer.


When Plath arrived in New York, she had spent two years at Smith College where she was torn between writing and becoming an artist.  Winder includes one of Plath’s sketches from her notebooks that indicate that Plath had a certain amount of talent as an artist.  However, Plath had also begun to make a name for herself as a writer, she’d won Mademoiselle’s fiction prize (yes, once upon a time magazines like Cosmopolitan, Mademoiselle  & Harper’s Bazaar published fiction as well as articles!), and had her poems published in Seventeen.  Because of her talent as a writer, Plath was assigned to work with the managing editor which may not have been a good fit for her.  Plath loved fashion, spending a great deal of time and money putting together her career girl wardrobe for her time in New York.


That was one of the joys of reading this book, realizing that Sylvia Plath was not always this depressed, haggard woman trapped in a marriage gone bad.  That once upon a time, she’d been a vibrant, fashion loving, foodie whose favorite past-times including baking in the hot sun, enjoying the simple pleasures of living near Cape Cod.  Where the book falls short is giving an explanation for what caused Sylvia’s breakdown when she returned from New York and how her time in New York may have contributed to it.  Winder writes about how Sylvia was a perfectionist, and how unhappy she might have been stuck working solely with the managing editor, that they perhaps worked her to hard, and that the magazine may not have really made the best use of her talents.


Winder points out that Sylvia was restless, that she was seeking something from her New York experience that she wasn’t getting, the men weren’t sophisticated enough or worldly enough.  Perhaps her expectations had been too high. Winder does mention that the magazine had the guest editors’ handwriting analyzed and Sylvia’s handwriting indicated that she was close to a nervous breakdown. The book also suggests that Sylvia also chafed under the expectations of young women of her era, that their sole ambition should to be wives and mothers.


What the book does extremely well is give the reader an idea of what it must have been like to be a young woman in college in those post-war years,  torn between their ambitions and what society expected of them, finding a husband and settling down to have children, putting those ambitions aside.  The reader also gets a small glimpse into not only the magazine world but the mixed signals that magazines such as Mademoiselle and Glamour gave young women.  I would have liked to have learned more about the history of Mademoiselle, for instance I had been under the impression that Conde Nast always owned the magazine.  I had no idea that they only bought it in 1959.  I find the whole history of women’s fashion magazines fascinating.  I had no idea either that there had been something called Charmed.


Winder briefly in the epilogue details the reactions of the other women to The Bell Jar when it was finally published in the United States in 1971.  Many of the women felt betrayed by their portraits in the book, and none of them had any idea that Sylvia had been going through any kind of emotional turmoil, she hid it so well.
Verdict:  A wonderful snapshot of a turning point in the life of one of America's most intriguing female poets but lacking in depth and analysis.
Mademoiselle Magazine Sylvia Plath

Anonymous said…
Congratulations for this wonderful reading article. I found it very informative and interesting too, I think you are a brilliant writer. I have bookmarked your blog and will return in the future. I want to encourage you to continue that marvelous work, have a great daytime!
Brokedown