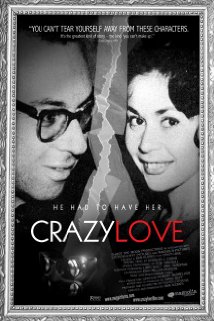 Happy Valentine's Day!  I wrote this blog post way back in 2007, when the documentary Crazy/Love came out. It was one of the most outrageous stories of love gone wrong, that if I read it in a novel, I wouldn't have believed it.  Linda Pugach recently passed away this January at the age of 75. If you get the chance, I urge you to seek out Crazy/Love on Netflix.

Everyone knows about Amy Fisher and Joey Buttafuco. They had an affair while she was underage, he broke up with her, she shot his wife. Now allegedly they're back together. Well, meet the 1950's equivalent. Instead of Amy Fisher, we have Burt Pugach, the man from whom 1-800-Shyster could have been invented. Burt, not very good-looking, but apparently smart and charismatic works as an ambulance chaser in the Bronx. He's also a film producer, and owns a night club. He spies Lnda Riss, a sheltered dark haired beauty said to look like Elizabeth Taylor, on a park bench and decides than and there that he has to have her.
Linda comes from a broken home, with a mother who had to work to support them since her father apparently abandoned them with no support. So Linda like most girls of that era is looking for a husband who would be a good provider. So despite not finding Burt attractive, she goes out with him.
He puts on the full court press, taking her to work, picking her up at lunch, taking her out to dinner. You have to wonder when he found time to chase any ambulances. He's madly, passionately in love with her. She's impressed by the people he knows, his fancy car, airplane, and the night clubs that he takes her too.
Then she finds out he's married, and refuses to see him. He tells her he'll get a divorce but stalls. This goes on for two years while he is disbarred, and starts drinking heavily, imaging that she cheating on him. She refuses to give up the goods without a ring. He fakes a divorce. The upshot is, she finds out what a lying jerk he is, and dumps him, getting engaged to another man. Burt flips out and hires three guys to disfigure her by throwing lye in her face. She ends up virtually blind from the attack. Later on, she loses her sight completely.
Now things get screwy. I won't go into too much detail, but you have to see this movie to believe it. Burt goes to jail, although he feels he doesn't deserve too, after all, he didn't actually cause the attack. He claims that he just told the men that he hired to rough her up a bit. Linda testified at his trial that he told her "If I can't have you, no one else will, and when I get finished with  you, no one else will want you."  Once during the trial, Burt took out one of the lenses from his glasses and tried to slash his wrists crying, "Linda, I need you.  Linda, I love you.  Linda, I want you.'

He was declared insane three seperate times, only to have the decisions reversed at this behest.  Eventually he's sentenced to 15 to 30 years.  While in prison, he writes her constantly, promising to get her a seeing eye dog. Meanwhile her world shrinks to the point of loneliness, and she faces a future of clipping coupons and cats. He gets out of prison, and manages to convince her to marry him. Now when I first heard about this story, I couldn't believe it. Then I saw Amy Fisher and Joey Buttafuco smooching for the cameras. So I thought, stop judging these people and see the film for yourself. So I went to a free screening last night, and I'm glad I did. Whatever draws Burt and Linda together, it seems to work for them.
The one moment that was telling for me was when Linda admitted that Burt sees her the way that she used to be, not as this disfigured woman. Of course, one can argue that the reason she's disfigured at all is because of him. But time seems to have stopped for both of them in 1959 when this all happened. Call it guilt or what have you, but strangely it works for them. You could call it redemption or revenge on her part. The director of the film mentioned in an interview that Linda always wore her dark glasses and never took them off once the entire time they were filming.  Apparently she dated a man in the 1960's, and she showed him what she looked like without the glasses and he recoiled at her scars. Burt not only knew her when she was beautiful, but in his eyes, she's still that woman.

I personally think that she married him because she felt that he owed her because of what he did to her, so taking care of her for the rest of her life was his punishment.  For him, I think it's the fact that she's elusive, she's there but she's not there. He seems to have her on some kind of pedestal. The ultimate dream girl for a not very good looking guy from the Bronx. A prize. The whole Madonna whore syndrome. The movie is also a cautionary tale about what happens when mistake love and obsession, and you opt for economic and material in a relationship.
Crazy/Love Love Gone Wrong New York Women