February Book of the Month – The Real Jane Austen: A Life in Small Things by Paul Byrne 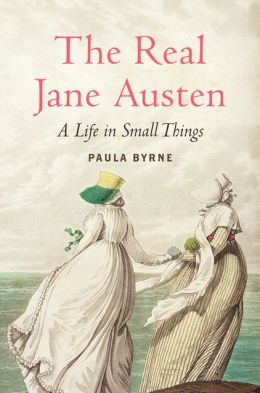 How Acquired:  Through the Publisher


What it’s about:  I came to Jane Austen relatively late in life it feels.  I didn’t read Pride and Prejudice until my senior year of high school.  As a moody teenager, I reveled in the gothic novels of Emily and Charlotte Bronte.  It was actually the film version of Pride and Prejudice starring Laurence Olivier and Greer Garson that got me interested in reading the book.  I found the movie so delicious and fun that I had to read the book.  Since then I’ve read Northanger Abbey, Emma and Persuasion and I’ve seen almost every single adaptation of all the books.  I’ve even read several biographies but I’ve never really felt as if I knew who Jane was.  She certainly wasn’t the character played by Anne Hathaway in BECOMING JANE that much is for sure.
The Real Jane Austen: A Life in Small Things offers a startlingly original look at the Jane through the key moments, scenes, and objects in her life and work.  Instead of a chronological ‘then she did this, and then she did that,’ birth to death biography, each chapter starts off examining a particular object; the topaz crosses that her brother Charles bought her and her sister Cassandra, marriage bans, her first royalty check, an Indian shawl.  Byrne uses these items to explore the lives of Austen’s extended family, friends, and acquaintances. Through their absorbing stories, we view Austen on a much wider stage and discover unexpected aspects of her life and character. We learn fascinating stories about Jane Austen’s paternal aunt Philadelphia Hancock and her extraordinary journey to India to find a husband.  Then there is Jane’s maternal aunt Mrs. Leigh-Perrot and her sticky fingers which led to jail time as she awaited her trial.   Byrne also uses the objects to examine how Jane used the things that she learned, the gossip, navy life to inform and enrich her writing.  The reader learns that Jane Austen was actually fairly well-traveled for her time, traveling back and forth from Bath to Steventon, the seaside villages of Lyme, naval ports such as Portsmouth and Southampton and many trips to London where she had the occasion to see actors such as Edmund Kean and Sarah Siddons grace the stage.


What Byrne does is so fantastic, that I’m amazed that other writes don’t tackle their subjects this way.  It’s like peeling back the layers of an onion, as each layer is removed, more and more of the real person is revealed. My favorite chapters were actually the ones that dealt with characters and situations from Mansfield Park which is funny because it's actually my least favorite of her novels. However, Byrne's chapter in particular on the Earl of Mansfield and his great niece Dido Elizabeth Belle is so fascinating.  In each chapter, I met a new and fascinating person.  I think I spent almost as much time looking up people like the poet William Cowper as I did reading the book.
The Real Jane Austen: A Life in Small Things introduces us to a woman who was much worldlier than she has previously been portrayed. Jane was far ahead of her time in not just her independence and ambition but also in her opinions. Byrne also examines how later generations of biographers and family members created the image of the genteel, unworldly spinister, and hid the tougher, more biting, woman who was both politically and socially aware of what was going on in the outside world.  Austen may have focused her fiction on four or five families living in the country, but those characters all interact with others who come from the outside world.  Byrne points out how ballsy it was for Jane to want to be published.  Although there were women authors like Mrs. Radcliffe, Fanny Burney (a particular favorite of Austen's), and Maria Edgeworth, Jane's novels fell into a category all by themselves, altogether quieter but much more realistic. By the time I put the book down, I felt as if Jane Austen had become a dear and treasured friend.


My verdict:  I strongly encourage everyone to buy this book, even if you’ve read other Austen biographies.  You will walk away from this book looking at not just Jane Austen but the novels with fresh eyes.
18th century Women Jane Austen Paula Byrne

Unknown said…
usually only laugh at myself but this is classical well thought pant wetting stuff. ive never been attracted to Asian men but what do you know... i land on korean soil and kaboom!!! i cant even look at foreign men any more! that said koreans are hard to date... with as many as 4 in my 6 months here the statistics are an indication of my inadeqaucy at knowing WTF do u wnat? not that i give id just like an idea... anyhow im a south african of Iranian descent so whereas im not black nor am i white im constantly hit with the What are you? no not an alien... regardless they seem to find the "mix" quite appealing so there...for all you brown skin girls wanting korean men.. Fear not you might just be a social experiment BUT on the upside being a guinea pig has its advantages
age play phone sex uk