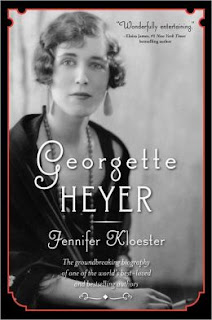 How acquired:  Through Net Galley

What it's about:
Georgette Heyer remains an enduring international bestseller, read and loved by generations of readers and extolled by bestselling authors. Despite her enormous popularity she never gave an interview or appeared in public.

My thoughts: Happy New Year everyone! During the holidays, I settled down to read Jennifer Kloester's new biography of author Georgette Heyer (1902-1974).  I've been reading romances since I was knee high to a grasshopper but I've only read a few Georgette Heyer novels.  I confess that most of my early reading was spicier historical and contemporary romances.  Oh I knew who Georgette Heyer was, most of the Regency authors and readers over the years have waxed rhapsodical over her novels. I'm surprised that I never picked up a Heyer novel until I was an adult given my complete adoration of Anya Seton and Jean Plaidy/Victoria Holt/Philippa Carr.  Perhaps I thought they were too stuffy or I just wasn't as interested in the Regency period as I became later on.

So when the opportunity arose to read Kloester's new biography, I jumped at the chance. It's interesting how some biographies just grab you and some don't.  I had this problem with the last biography  I read, The Horror of Love which I reviewed before the holidays. However, I didn't have that problem with Kloester's biography.  Perhaps because I knew so little about the author that everything was completely knew to me.  Heyer was born during the Edwardian era and died during the early 70's.  Her upbringing was of  that of a typical middle class girl of the time, educated largely at home until her teens.  Heyer as a child was apparently incredibly shy but she was also a born storyteller, keeping her younger brothers amused with the tales that she wove for their enjoyment.

Her father, George, initially worked for King's College but eventually moved into fundraising as well as working for a bank in Paris, where the family lived for several months just before the dawn of World War I.  Her life was comfortable, the Heyer family lived in Wimbledon for most of Georgette's life.  Although Georgette was incredibly intelligent, there was no talk of her going on to University.  Instead at the age of 17, she wrote her first novel The Black Moth, which was published when she was 19 (the book is still in print).  By the time she died, Heyer had written 55 books, not just historical romances but also detective thrillers and short stories.  She married young, at the age of 23 to Ronald Rougier, a mining engineer who later retrained to be a barrister.

Kloester's biography is a fascinating glimpse into the life of a writer.  Georgette was the main breadwinner in the house for a number of years until her husband became a barrister.  Kloester details how Georgette tried to balance her public life as the author and her private life where she insisted on being referred as Mrs. Rougier, and deferred to her husband.  Georgette and her husband had a remarkably modern marriage by our standards.  They were good friends as well as husband and wife, Ronald was her beta reader for her novels, helped her out with her detective thrillers in terms of how the murder was committed. He was her biggest cheerleader.  However her success did take a toll on family life.  Her son Richard, an only child, grew up lonely since he was mainy around adults and her family life often took a backseat to her writing.

Writers will no doubt emphathize with Heyer's frustrations with her publisher and her agent. Heyer frequently complained that her books weren't being promoted enough and she was frustrated at the lack of interest from film producers.  Heyer seems to have been one of those rare authors whose books went straight to print without the dreaded revision letters from her editor.  Apparently her publisher just took it for granted that what she wrote was awesome and sent the book to print without even reading it despite her begging. She also had the same frustrations with her copyeditor that I'm sure most writers will recognize. Like a lot of creative people, Heyer was terrible with money, but her husband wasn't much better.  She tended to rely on her accountant to work things out with the Inland Revenue and we all know how well that turns out.  At one point, Heyer seemed to have been supporting an entire village, not just her husband and son, but also her two brothers (her father died when she was in her early 20's, leaving Heyer to support not only her mother but her two teenage brothers), and assorted relatives.

Kloester has a great deal of sympathy for Heyer and tends to gloss over the more negative aspects of Heyer's character, her snobbery and racism. I wish that Kloester had given a bit more insight into the novels, perhaps more description of the plots and how Heyer researched her books. Although Kloester had access to Heyer's private papers, in the end, the reader knows as much about Heyer as they do about Jane Austen.  In the end, I'm not sure that I would have wanted to know Heyer personally but I admired her work ethic and tenacity.  How many authors today have written 55 best selling books that are still in print (before the advent of being able to e-pub their backlist)?

Verdict:  A well-written look at one of the 20th century's most beloved authors.

Unknown said…
I found your blog when I was looking for a different sort of information wonderfull collectionbeautifull dress but I was very happy and glad to read through your blog. The information available here is great
sexy dresses
February 2, 2013 at 7:01 PM