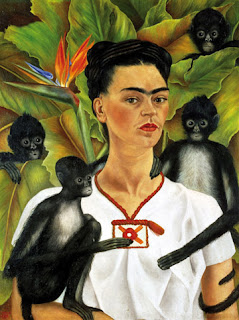 Frida Kahlo, Mexican, 1907-1954, Self-Portrait with Monkeys, 1943
Oil on canvas, 81.5 X 63 cm, Gelman Collection. Diego Rivera Frida Kahlo Museums Trust, Mexico, D. F. /
While planning a future trip to Washington, DC, I stumbled upon an ad promoting this new exhibition at the High Museum of Art in Atlanta, GA.  Entitled "Frida & Diego: Passion, Politics and Painting" the exhibition will feature some of the best examples of Frida Kahlo and Diego Rivera's work, approximately 140 paintings mainly from collections in Mexico. According to the press release, the paintings will be exhibited chronologically and according to themes including: maternity, Mexcian identity, and portraiture.  The High Museum of Art will be the only U.S. venue for this exhibition, so if you want to see it, you'll have to book a plane to Atlanta.

I wrote about Frida Kahlo in Scandalous Women and I'm not afraid to admit that I became a little obssessed by her and her stormy relationship with her husband Diego Rivera.  Any time that you put two passionate people together, particularly if they are artists and sparks are bound to fly! "Frida & Diego" is particuarly significant because it marks the first time that important works by these two artists will be shown in the Southeast.  I was lucky enough to see an exhibition of Frida's works at the San Francisco Museum of Modern Art and well as an exhibit of Diego's work at LACMA in Los Angeles, but just the idea of seeing their work together is truly exciting.  If I can afford it, I may have to take a short jaunt to Atlanta!

The museum plans to position their work in the political and artistic contexts of their time.  Few contemporary artists have captured the imagination with the force of Frida Kahlo and her husband.  The exhibition promises to focus on their shared ideals and ideas instead of their often tumultuous relationship but that's particularly hard to do, particularly since many of Frida's paintings were autobiographical.

The exhibition kicks off with the special opening event “Party with Passion!” on Valentine’s Day and remains on view until May 12.  Of course there will be a full color catalogue which may have to suffice for those of us who can't haul our butts down to Georgia. “Frida & Diego” is also the first completely bilingual exhibition to be presented by the High, with Spanish and English versions of wall labels and audio tours, as well as bilingual tour guides on Sundays throughout the show.