Book of the Month: The Joy of Sexus 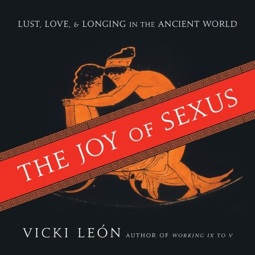 Title:   The Joy of Sexus - Lust, Love and Longing in the Ancient World

How Acquired:  Through publisher


In her previous books, Vicki León put readers in the sandals of now obsolete laborers, ranging from funeral clowns to armpit pluckers, and untangled the twisted threads of superstition and science in antiquity. Now, in this book of astonishing true tales of love and sex in long-ago Greece, Rome, and other cultures around the Mediterranean, she opens the doors to shadowy rooms and parts the curtains of decorum.

Show more
Show less
What others are saying:

"A snappy ride into the stunning, sometimes barbaric, and alwauys entertaining sexuality of the ancient world...This is a fun, enlightening trip into the ancient world not covered in high school textbooks."--Publishers Weekly (starred review)


"Enjoyable, edifying, and humorous."--Kirkus Reviews
Meet the Author:
Vicki Leon calls the central coast of California home but returns often to her Mediterranean sources. Having honed her research skills by unearthing nine hundred achievers for her Uppity Women series of books, she's delved deeply into the ancient world with Working IX to V, How to Mellify a Corpse, and, of course, The Joy of Sexus.
Should you buy it?  I must confess that I have had this book for 2 weeks now and I just dived into it last night and I'm glad I did.  This book will tell you everything that you wanted to know about sex and sexuality in the Ancient World.  Stuff that we all wanted to know but were afraid to ask or just didn't know where to look.  Readers will learn the answer to questions like 'Did anyone call themselves bisexual or transgendered?' 'And what about romantic love, did that exist in the ancient world?' Vicki Leon's latest book THE JOY OF SEXUS uncovers the astonishing true tales of passion and wide-open sexuality in teh Greek, Roman, and other long-ago cultures.  In 89 no-holds-barred essays or short chapters, Leon takes the reader on a randy tour of aphrodisiacs, buttocks worship, cross-dressing, and a Christian martyr named Perpetua (Seriously, someone needs to write a historical or historical romance where the heroine is named Perpetua stat!).
Here are just a few of the topics covered in the book:

As I mentioned, I just started reading the book, but already I've found quite a few Scandalous Women in its pages, that I'm now dying to write about!

Mandy said…
Thanks for posting! This looks like a great book. I'm definitely gonna pick up a copy. :)

I have found your site to be quite useful. Keep updating your site with in valuable information... Regards

Anonymous said…
Thanks for bringing this to my attention. This looks like a wonderful resource!
January 21, 2013 at 11:34 AM

vickileon.com said…
HI there, I AM tickled that you dived into The Joy of Sexus and are finding a bit of 2000-year-old joy there! Much appreciated---and looking forward to your choice of scandalous women!
Cheers, Vicki Leon, author
January 22, 2013 at 6:55 PM