Scandalous Review: The Horror of Love 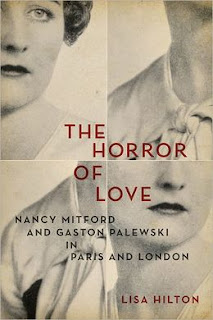 
How acquired:  Net Galley
Overview:  "Oh, the horror of love!" Nancy Mitford once exclaimed to her sister Diana Mosley.


Elegant and intelligent, Nancy was a renowned wit and a popular author. Yet this bright, waspish woman, capable of unerring emotional analysis in her work gave her heart to a well-known philanderer who went on to marry another woman. Was Nancy that unremarkable thing—a deluded lover—or was she a remarkable woman engaged in a sophisticated love affair? Gaston Palewski was the Free French commander and one of the most influential politicians in post-war Europe. Their life together was spent amongst the most exciting, powerful, and controversial figures in the center of reawakening Europe. She supported him throughout his tumultuous career and he inspired some of her best work, including The Pursuit of Love.


Lisa Hilton's provocative and emotionally challenging book reveals how, with discipline, gentleness, and a great deal of elegance, Nancy Mitford and Gaston Palewski achieved an affair of the heart.


Meet the Author
Lisa Hilton is the critically acclaimed author of Queens Consort and Athenais: The Life of Louis XIV's Mistress, the Real Queen of France. She lives in London.


My thoughts:  The first summer I ever spent in England, I had the opportunity to see a new musical called The Mitford Girls.  Since I had never heard of the Mitford's, and had no idea why anyone would want to write a musical about them, I declined.  It wasn't until later that I learned that Nancy Mitford was the author of Love in a Cold Climate and The Pursuit of Love, two books that I read and loved in high school.  Since then, I have read a great deal about the sisters.  Of course, much of my focus has been on the more colorful of the sisters, Diana, who married the British Facist leader Sir Oswald Mosley, Unity Mitford and Jessica.  Nancy I knew more as author, especially of Voltaire in Love, one of the books that I used as a source when I wrote Scandalous Women.  She always seemed like the dark horse of the family.  The more respectable, older sister, who married terribly and moved to Paris, her happy place.  So when I saw that Net Galley had Lisa Hilton's new biography of Nancy and Gaston Palewski, I jumped at the chance to review it.
Unfortunately my enthusiasm soon waned once I started reading the book. I'm not sure that I can put my finger on it exactly, but I found the book rather dry and unsatisfying.  The book starts off with their first meeting in 1942 in London during the war and then flashes back to their respective childhoods.  Since I knew less about Gaston than I did about Nancy, I found the sections on his early childhood and his family history interesting, particularly the fact that he and his brother both converted to Catholicism (their parents were Jewish from Poland originally).
However, once the war starts, the book becomes not only a general history of the Free French but also a mini-biography of Charles de Gaulle.  Long stretches of narrative are devoted to the war in Africa and de Gaulle's interactions with both the English and the Americans. When Gaston is involved, I found it interesting but most of it was tedious to wade through.  I found myself putting the book down or skipping ahead to parts where Nancy was concerned.  Finally after about 150 pages, Nancy and Gaston finally meet but again we're told a lot about their relationship but we don't really see it.  Because of Gaston work, the couple spent a great deal of time apart over the 30 years of their relationship.
I'm also not quite sure what it was that drew these two people together, apart from their shared love of France, the 18th century, collecting objet d'arts, and going out to parties.  It's clear that Nancy fell madly in love with Gaston for some reason (apparently he was also good in the sack) but whether he actually loved Nancy is a matter of debate.   Like Jean-Paul Satre, he seemed to have many women, at one point in the book, besides Nancy, he was juggling at least 3 other women, all of them social acquaintainces of Nancy, including Susan Mary Alsop.  Hilton points out that Nancy's sister Diana was also married to a serial philanderer as was another good friend of hers, Lady Diana Cooper but that Nancy is pitied because she wasn't married to Gaston, she was just one of his many mistresses.
By the end of the book, I felt I knew less about Gaston and Nancy but a great deal about post-war French politics and Parisian society after the war.  I'm also not sure that I liked either one of them very much either.  Hilton points out that Nancy was not a snob, which is partly true.  She was virulently anti-American despite the fact that she had never been there, and also her sister Jessica lived in the States for many years.
Verdict:  A perfectly serviceable but ultimately disappointing biography.

Lauren Hairston said…
That's too bad! I love love love love love Nancy Mitford's writing and I think it would be great to know more about events that inspired The Pursuit of Love. Bummer! Maybe I can check out a copy from the library so I don't feel bad for skimming...
December 20, 2012 at 4:26 PM

Elizabeth Kerri Mahon said…
Hi Lauren, I would also suggest reading Selina Hastings or Laura Thompson's biographies of Nancy or even The Mitford Sisters by Mary Lovell.
December 20, 2012 at 8:41 PM