October 29, 2012
I apologize for my lack of posts lately but I spent a week in London at the end of September/beginning of October and I'm still recovering.  Not from jet lag but because it was such a great experience.  Really anytime that I get to go to London is a good experience! Once again, I booked a room through At Home in London.  At Home in London features B&B's in private homes.  The last two times I stayed in Parsons Green, this time I stayed in a lovely home in Shepherd's Bush owned by an antiques dealer and his wife.

This time the trip was both for business and for pleasure. I attended the Historical Novel Society conference held at the University of Westminster on Upper Regent Street.  This was my second time attending the Historical Novel Society conference and it won't be my last.  I saw many familiar faces from last year but also some new ones. The conference was very different from the one held last year in San Diego. For one thing, I was unable to attend the Saturday night banquet because it was sold out.  The conference in London was structured on a sliding scale, meaning that you could pay for all three days or you could pay it piecemeal.  I opted for the Friday night cocktail party, the Saturday all-day conference.  Because I registered in July, the banquet was already sold out and there was just no more room for them to add extra tables.  It was interesting to hear opinions on the future of historical fiction from editors, agents and booksellers in England vs. the US. The general consensus seemed to be for writers just to write a great story that you are passionate about.

Philippa Gregory was the Saturday morning speaker and it's always a delight to hear her speak, although she seems to have a bit of a chip on her shoulder in regards to critics who don't take the genre seriously or consider it to be 'literary.'  While I enjoyed the conference, I found the rooms to be a bit cramped, and space was tight in the room where lunch and the cocktail party was held with very limited seating. I totally get that holding the conference at the University kept costs down for participants but I kind of missed the rather posh in comparison meeting rooms that you find at most hotels in the US.  It was a bit stuffy in the rooms at times, and I found myself nodding off at various points on Saturday.

I skipped the Sunday portion of the conference opting to sleep a little later and to head out to Hampton Court Palace to see the final day of the Beauty, Sex and Power exhibit which featured a host of portraits of society beauties during the reigns of the Stuart Monarchs.  While wondering through the rooms, I came upon a reenactment of Barbara Castlemaine getting ready to have her portrait painted by Sir Peter Wright, a court painter who is not as well known as Sir Peter Lely.  When they asked for a volunteer from the audience to help Lady Castlemaine undress, I raised my hand. So I got to be the Lady Elizabeth for about 15 minutes.  I love reenactments, although I felt for the gentleman playing Sir Peter, he seemed rather green as if he wasn't quite sure what was required of him.  Lady Castlemaine had to lead him gently by the hand through their scene.

Later that night I met my friend author Leanna Renee Hieber at the Spaniard's Inn in Hampstead.  If you have never been to the Spaniard's Inn, it is worth the trek from the Hampstead tube station.  And I do mean that it is a trek.  It felt like we were walking for miles until we finally reached the Inn. Outside we discovered this groovy bench where apparently Keats sat when he quaffed ale at the inn as you can see from the sign on the bench. 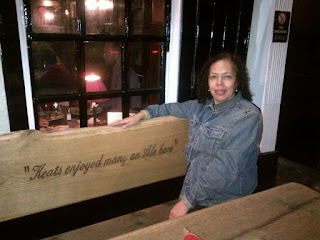 The next afternoon, I headed to Kensington Palace to see the new Victoria Revealed exhibit.  The palace has undergone extensive renovations and it now looks quite spiffy. 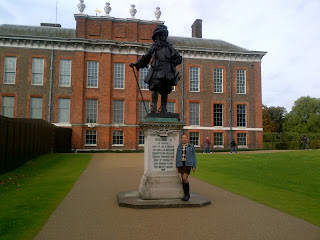 It has stopped raining and the sun came out so here is a picture of me and King William III at the entrance to the Palace.

The Victoria Revealed exhibit is wonderful because it uses Victoria's own words (as well as Albert's) to illustrate her life along with a host of personal items from her wedding dress to the jewelry that Albert gave her, christening gowns, books, letters.  For probably the first time, I began to see Victoria as not just a Queen but a living, breathing person with thoughts and feelings, not just the grumpy widow in black. 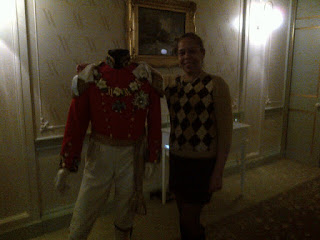 This is a photo of me with one of Albert's uniforms.  In fact, I think this is what he wore when he married Victoria.  My friend Leanna took it with her Blackberry without a flash, so it's a little fuzzy. As you can see Albert was not that tall, about 5'7" or 5"8.  I'm wearing 3 inch heels and I'm about the same height as he would have been.  There was also a small exhibit about Queen Victoria's jubilee which was quite interesting. A bit smaller compared to Queen Elizabeth II's! 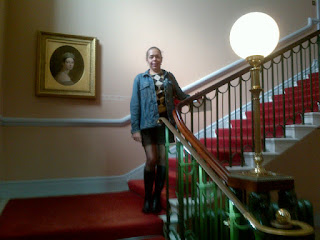 And here's a final picture of me with Queen Victoria in the background on the staircase leading up to the exhibit.

I have read this post thoroughly and i have got lot of information..
You should keep it up.. so that we get information always...
Wholesale fleur de lis purse