Sugartime - The Scandalous Romance of Sam Giancana and Phyllis McGuire 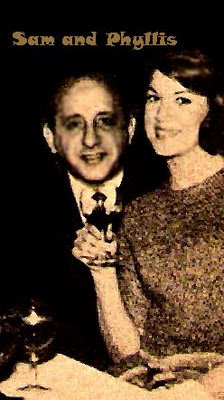 Love makes strange bedfellows doesn’t it? How else to explain the relationship between a short, middle-aged mobster and the lead singer of a wholesome singing group singing songs in perfect harmony? Was it there shared Midwestern backgrounds (he was from Chicago, she was Middletown, OH)? Retired FBI agent William Roemer, who tracked Giancana for years could never figure out what the attraction was between the two. "It's amazing that it ever took place," says Roemer, in an interview with The Los Angeles Times in 1995 to promote the HBO film about the unlikely romance. "He was just as ugly as he can be and he wasn't a cultured, refined man. I saw no redeeming human qualities about the guy. We put microphones in his headquarters and listened to him talk all the time. She had everything. She had beauty. She had money. Yet, she fell in love with this gangster. I could never figure it out. I have talked to her several times and she's a lady. She's refined and cultured. She's intelligent and articulate. He was just the opposite." Whatever it was, it kept gossip columnists in a tizzy in the 1960’s as the lovebirds criss-crossed the country from Palm Springs to Atlantic City, and the capitols of Europe.

So how did these two crazy kids meet? Why in Sin City of course, Las Vegas, Nevada to be exact. Word is that Giancana first caught sight of McGuire during her engagement with her sisters at the Desert Inn. Giancana was 52 and a widower, Phyllis was not quite thirty. Like a many, Phyllis had succumbed to the lure of the tables, racking up a hefty marker. Giancana went to Moe Dalitz, who ran the Desert Inn and asked how much she owed. Moe supposedly told her that Phyllis owed $100,000 (Sam's daughter Antoinette Giancana in her autobiography MAFIA PRINCESS claims that it was more like $16,000, still a hefty debt). Giancana is said to told Moe to “eat it,” meaning to forgive the debt. The gesture, along with a hefty dose of expensive flowers, seems to have done the trick. Sam and Phyllis soon fell in love. Years after Sam’s death, Phyllis admitted to writer Dominick Dunne that the two greatest losses in her life were her father and Sam.

Sam Giancana (1908 - 1975) was one of the Mafia’s most notorious and high profile figures in the 1950‘s and 60‘s. Born in Chicago to Sicilian immigrants, he’d clawed his way from a juvenile street crew up to the top of the Mafia food chain. In the film and book The Godfather, Johnny Fontane asks Vito Corleone to get him out of his studio contract. That scene was supposedly based on Giancana who allegedly forced band leader Tommy Dorsey into letting Frank Sinatra out of his contract early, so that he could expand his career. By the 1960’s he’d already been involved with Judith Campbell Exner,using her as a go-between himself and JFK, and recruited by the CIA along with other mobsters to assassinate Cuban president Fidel Castro. Along the way, Giancana married and fathered three daughters.

While Giancana was going to the school of hard knocks and learning how to make license plates during a stint in prison, Phyllis McGuire (1931-) was growing up in Ohio along with her two older sisters, Christine and Dorothy. Their mother Lillian, a minister at the Miamisburg First Church of God, let them sing in church as kids. When Phyllis was 12, they signed a contract with Coral Records. That same year, they appeared on Arthur Godfrey’s Talent Scouts, where they performed for seven years. They made numerous TV appearances on all the popular variety shows of the period. Their recordings of "Sincerely," "Picnic," and “Sugartime" all sold more than one million copies.

At first Sam and Phyllis were able to keep their romance a secret, despite Giancana popping up wherever the sisters performed. The FBI knew about the affair but chose not to expose the relationship because they knew the publicity would be detrimental to Phyllis’s career. When Sam and Phyllis were photographed together at a nightclub in London in 1962, the picture was flashed around the world. The press, not to mention the public, were outraged that Phyllis could associate with a known mobster. Trying to do damage control, Phyllis gave a tearful interview to the powerful gossip columnist Dorothy Kilgallen swearing that she would never see Sam again which was a total lie. The publicity put a damper on her career for a time but there were other problems besides public opinion. While Giancana wasn’t faithful, he expected Phyllis to be. He suspected her of cheating on him with comedian Dan Rowan of TV’s Laugh-In. He even went so far as to try and get his CIA contact Robert Maheu to bug her hotel room to get proof.

There was also the Fed’s who’d been after Giancana for awhile. And now Bobby Kennedy was Attorney General of the United States, making it his mission to go after the mob, which was ironic since Giancana allegedly helped JFK get elected. The FBI trailed the couple were ever they went. ‘We lock-stepped him," Roemer recalls. "He was the only guy in the history of the FBI who we lock-stepped. I would stay half a step behind him and half a step to his left. No matter where he went, I would stay that distance from him. If he went to dinner I would go with him. If he went to the restroom, I would go right up to the next urinal. We got into some situations.” They bugged Giancana’s homes, listening in on the couple’s most intimate moments. In 1961, the FBI bugged their hotel room and knew that they would be stopping over in Chicago on their way to New York. At O'Hare airport, Giancana was kept at bay while the FBI talked to McGuire to see if she would cooperate with them instead of being subpoenaed to appear in front of a federal grand jury. Phyllis agreed to do what they asked, and they took the subpoena back, but she never kept her end of the bargain.

The mob wasn’t too happy about Sam’s relationship with Phyllis. Not only because they thought he wasn’t minding the store, but because it drew too much attention. In the end the relationship couldn’t last. Giancana was sentenced to jail for refusing to testify in front of a grand jury. As a result, Giancana was deposed as boss of the Chicago outfit. After his release, he fled to Mexico. After about seven years of exile, Giancana was arrested by Mexican authorities in 1974 and deported to the United States. After agreeing to be a witness in the prosecution of organized crime in Chicago, Giancana was murdered by an unknown assailant in his Chicago home while he was cooking dinner in 1975.

Phyllis McGuire, now in her eighties, lives in Las Vegas where she is said to be working on her memoirs. She and her sisters retired in 1968 but have done occasional public appearances since reuniting on stage 1986.
Phyllis McGuire Sam Giancana Scandalous Romance

Unknown said…
"Scandalous Women" has been included in this weeks A Sunday Drive. I hope this helps to attract even more new visitors here.

Mandy said…
Just stumbled onto your blog today. Great stuff! You have a new follower. :)
Mandy
www.nestledinnostalgia.blogspot.com
April 24, 2012 at 10:45 AM

ltiwnsend said…
Phyllis in her last days of life,Im wondering what happened to her to end up alone and in a group home.
November 10, 2015 at 6:47 PM

Colonel Klink said…
Phyllis lived life on her own terms and apparently was good to people as I never read anything bad about her. Itiwnsend, you write that you are taking care of her in her last days and that is a good thing to do. All of us will have "last days" and so it shall be. She is not alone by any means as she is being cared for and, though old, she had a great life and may God bless her. Nothing wrong with getting old as it happens to us all.
December 16, 2015 at 9:05 PM