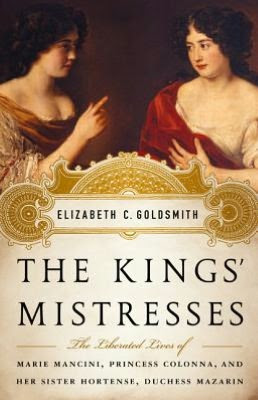 From the inside cover: The Mancini Sisters, Marie and Hortense, were born in Rome, brought to the court of Louis XIV of France, and strategically married off by their uncle, Cardinal Mazarin, to secure his political power base. Such was the life of many young women of the age: they had no independent status under the law and were entirely a part of their husband’s property once married.

Marie and Hortense, however, had other ambitions in mind altogether. Miserable in their marriages and determined to live independently, they abandoned their husbands in secret and began lives of extraordinary daring on the run and in the public eye. The beguiling sisters quickly won the affections of noblemen and kings alike. Their flight became popular fodder for salon conversation and tabloids, and was closely followed by seventeenth-century European society. The Countess of Grignan remarked that they were traveling “like two heroines out of a novel.” Others gossiped that they “were roaming the countryside in pursuit of wandering lovers.”

My thoughts:  I've been waiting for a long time for someone to write a biography of two of the Mancini sisters, so I was excited to get a copy of Elizabeth Goldsmith's new book The Kings' Mistresses which will be published this Tuesday.  The book's title is a bit misleading, there is no evidence that Marie Mancini was Louis XIV's mistress, although he contemplated marrying her before being convinced by Mazarin, her uncle, that he needed to make a dynastic marriage to his cousin the Spanish Infanta Maria Theresa.

The book is a more than just a biography of the lives of these two Scandalous Women. It is also a fascinating look at the realities of marriage for women in the 17th century.  Although both Marie and Hortense were well born, they had very little rights when it came to marriage. Both marriages were not successful. She was married off at the age of 15 just before her uncle died. Hortense's husband was obsessed with her to the point of madness, he forced her to travel with him up and down the country visiting his various properties, he restricted her movements,  and who she could see.  While keeping her a virtual prisoner, he then systematically began spending all the money that her uncle had left to them. In 6 years, Hortense had given birth to 4 children, and she had enough of her husband. She attempted to seperate from him using the courts, but she found herself thwarted and frustrated at every opportunity by her husband to the point that she felt that she had no choice but to flee the country.

Meanwhile Marie married an Italian prince. In the beginning her marriage seemed to be going better than Hortense's. Marie scandalized Roman society by freely roaming around the city, and taking part in theatrical productions. After giving birth to 3 sons, Marie wanted seperate bedrooms, but her husband , like Hortense's wasn't used to being thwarted. When Marie began to suspect that he was trying to kill her, she too fled first to France and then to Spain.

Both women spent years leading nomadic lives, trying to stay one step of their husbands and the courts.  They published their memoirs to share their stories.  This was highly unusual, very few aristocratic women published their memoirs, if they wrote them at all, they were privately published or circulated amongst their friends and family.  It was an incredibly bold move for the time, and helped to engender public sympathy for the women. It also served to strengthen the attitudes of those men and women who feared independent women. In an age before newspapers, it is incredible how the story of the Mancini sisters spread across Europe. Their memoirs were translated into many languages, leaving a remarkable record of women's lives. It is not hard to sympathize with the sisters, particularly given just how awful their husband's were. It is shocking the lengths that both men went to try and bring their wives to heel, everything from keeping their children from them to keeping them impoverished. Hortense's in particular was just insane, even his children later took him to court to try and recover their inheritances that he had squandered.

Goldsmith's book is incredibly well-researched and written, if a little too academic at times. The book is filled with details from previously unpublished letters, it is most effective when Goldsmith allows the women to tell their stories in their own words.  The sisters come across as bold, witty, and highly intelligent, larger than life characters but also women who in the end paid a high price for their need for independence. There are a few typos in the galley that I read, which will hopefully be corrected when the book is published.  For example Goldsmith states that Henrietta Maria was Louis XIV's cousin when she was actually his aunt, James I was Charles II's grandfather not his father, at one point she states that it is 1665 and then 1675.  And there were some strange omissions, not once does she discuss Cardinal Mazarin's relationship to Anne of Austria nor does she mention that one of the reason's that Louis XIV became more religious as he got older and revoked the Edict of Nantes was his relationship with Madame de Maintenon. Despite these flaws, the book is well worth reading.