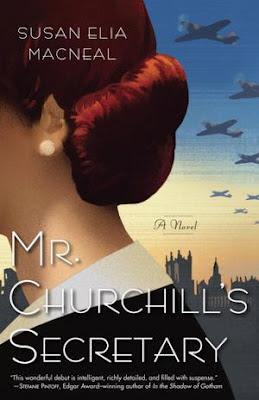 Synopsis:  London, 1940. Winston Churchill has just been sworn in, war rages across the Channel, and the threat of a Blitz looms larger by the day. But none of this deters Maggie Hope. She graduated at the top of her college class and possesses all the skills of the finest minds in British intelligence, but her gender qualifies her only to be the newest typist at No. 10 Downing Street. Her indefatigable spirit and remarkable gifts for codebreaking, though, rival those of even the highest men in government, and Maggie finds that working for the prime minister affords her a level of clearance she could never have imagined—and opportunities she will not let pass. In troubled, deadly times, with air-raid sirens sending multitudes underground, access to the War Rooms also exposes Maggie to the machinations of a menacing faction determined to do whatever it takes to change the course of history.  Ensnared in a web of spies, murder, and intrigue, Maggie must work quickly to balance her duty to King and Country with her chances for survival. And when she unravels a mystery that points toward her own family’s hidden secrets, she’ll discover that her quick wits are all that stand between an assassin’s murderous plan and Churchill himself.

My thoughts:  I picked up this book yesterday at Barnes and Noble and finished it, oh about a half-hour ago.  I hadn't planned on buying a book at B&N unless it was a research book since I'm a little poor right now and books are a luxury compared to say food and electricity, but I just couldn't help myself, it called out to me. You know how that is, before I knew it, I was at the cash register handing over my membership card.  I didn't even NOOK it but bought the actual physical book.

Thank god I did because this is an awesome book. I'm a sucker for books set during WWII probably because my dad fought in the war.  Unlike Susan Elia MacNeal who came up with the idea for Mr. Churchill's Secretary by visiting the Cabinet War Rooms, I wept through them. This book is chock-full of details about the period, and a fascinating cast of supporting characters. I now have a girl crush on Maggie Hope. British born but raised in America (a Wellesley graduate to boot, like Secretary of State Hillary Clinton),  Maggie is brave, bold, brilliant and brash.  She's not afraid to speak her mind, but she's also not without her flaws, she's prickly and stubborn, a little too certain that she's right at times.  Probably because she grew up always being the smartest girl in a room.  She has a passion for mathematics, and just wants to be able to use her skills for the war effort, not be stuck as a typist, even if she's typing for Winston Churchill.

Some of the best scenes in the book were Maggie's one-on-one scenes with the PM, with just a few deft strokes, MacNeal manages to convey the boundless and unrelenting energy of Winston Churchill. The book is both a fast-paced thriller with just enough surprises to keep the reader gasping, as well as an intimate portrait of Britain at war, scene through the eyes of ordinary people caught up in extraordinary circumstances. The book is incredibly well-written, immensely lyrical. One of the best scenes in the book is the scene where the PM, Maggie and her friends are watching the Luftwaffe drop bombs on London from the roof of Number 10.  I couldn't put this book down and I will be counting the days until the next book in the series Princess Elizabeth's Spy comes out.

Of course, there are a few quibbles, I wouldn't be me if I didn't get a bit nic-picky.  The Duke of Windsor was Edward VIII not Edward VII who was his grandfather (MacNeal gets it right in the sequel), Odile is not the swan in the 2nd act of Swan Lake, it is Odette.  I don't want to spoil the plot but there were a few too many cooincidences that any soap viewer would pick up on.  Once would have been fine but it happens three times which is three times too much.

The back cover copy compares the book to Jacqueline Winspear's Maisie Dobbs series which I haven't read but to me it reminds me more of Kathryn Miller Haine's Rosie Winter series which is also set in WWII and features an American heroine.

Verdict:  If you like a little history with your mystery, this book is for you.

Anonymous said…
What a great review! Adding this to my wish-list as we speak. I've seen a couple reviews for this and am very interested.
April 12, 2012 at 10:07 PM

Holly said…
Definitely sounds like something I might like. I watched The King's Speech recently (which I LOVED) and decided I really needed to read more in that time period. This sounds like just the thing :)
April 19, 2012 at 2:03 AM