March 05, 2012
Recently I was contacted by a producer from NPR about appearing on one of his shows.  As we were talking me mentioned that when he'd Googled me, another Elizabeth Mahon came up.  One who played for the All-American Girls Professional Balseball League during World War II.  How cool is that? The other Elizabeth 'Lib' Mahon was born the same year my mother was, 1919, in Greenville, South Carolina.  Like me, Elizabeth was a Scorpio, born on November 18th. 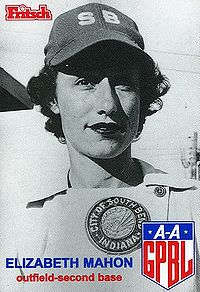 This is her baseball card.  She played outfield and second base, and batted and pitched right-handed.  Truthfully, I suck at sports, particularly baseball. I think I hit the ball once in softball one summer at day camp, and let's not talk about how I played in the outfield.  Lucky for me, when we played softball in gym, none of us could really hit the ball, so I spent most of my time in the outfield doing absolutely nothing! So I find it amazing that someone I share a name with was a professional athelete!

Lib played baseball from 1944 through 1954, first for the Minneapolis Millerettes and then for the Kenosha Comets and the South Bend Blue Sox.  The 1992 film A League of Their Own was a fictionalized account of the women who played pro-ball during the war. The film rejuvenated interest in the AAGPBL which is why we now know so much about players like Lib. According to Wikipedia, her father was a huge baseball fan, as was her older brother. However, while her brothers played sandlot ball, Lib and her sisters played basketball.  It wasn't until she was in high school that she played softball, field hockey and soccer.

She went to Winthrop College where she received a degree in phys ed in 1942.  After teaching for a year, she moved back to her hometown of Greenville, where she went to work for the post office.  At Winthrop, Lib became good friends with Viola Thompson, who shared her passion for baseball.  In 1944, both Viola and Lib were seen by a talent scout who offered them invitations to try-out for the All-American Girls Professional Baseball League in Chicago. Players were to paid the princely sum of $60 a week which was a vast sum of money back in the '40's.  Both women decided to try out and both were lucky enough to score jobs for the inaugural season.

Lib's first team, the Minneapolis Millerettes, didn't last long in the league. Lucky for her, she was spotted by the manager of the Kenosha Comets who traded 3 players for her mid-season.  Her first year, she hit .211 with 38 runs batted in and a career-high three home runs in 107 games. She was traded to the South Bend Blue Sox where she had a hitting streak in her first year which spanned 13 games. In 1952, Lib quit playing, taking a job as a teacher at a public school in South Bend. It was a smart decision, the novelty of women playing professional baseball had worn off.  Lib earned a Master's Degree at Indiana University.  She remained a teacher and guidance counselor until her retirement in 1981.

She lived in South Bend until her death at 81.  She was posthumously inducted into the South Carolina Athletic Hall of Fame in 2005.  The AAGPBL has a permanent display at The Baseball Hall of Fame in Cooperstown, NY.  Elizabeth Mahon is enshrined there along with the rest of the women in the league.