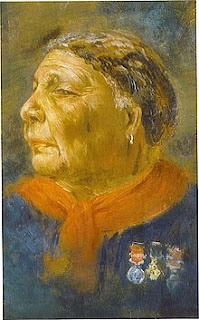 Tune in this Sunday, February 26th to Scandalous Women over at Blog Talk Radio where I will be talking about one of the most remarkable women of the Victorian Era:  Mary Seacole.

The Times of London called her a heroine, Florence Nightingale called her a brothel-keeping quack, and Queen Victoria's newphew called her Mammy. But her name was Mary Seacole, one of the most eccentric and charismatic women of the Victorian era. Desperate to help out in the Crimean War, she was refused, but she traveled under her own steam, to help out. For more than a century after her death, the life of Mary Seacole was forgotten, but thanks to new research and biographies, her story has now been told. In 2004 Mary Seacole was voted top of a list of 100 of the greatest Black Britons and was again recognised by the public for her achievements during the Crimean War.

Jane Robinson - Mary Seacole: The Charismatic Black Nurse Who Became A Heroine of The Crimea (2004)

zirconelle said…
Mary Seacole wasn't English. She was Jamaican born and bred. Nor was her contribution forgotten. I grew up in Barbados and I read about her as a little girl, just as I read about Florence Nightengale. I always find it interesting how big industrialised countries are quick to appropriate the notable citizens of other countries when it suits them. So after more than a century of ignoring her contribution, mary Seacole was trotted out in 2004 as a "Great Briton", so the British Government could portray the UK as a tolerant, multicutural society.
February 27, 2012 at 11:44 PM

Elizabeth Kerri Mahon said…
I'm aware of the fact that Mary Seacole was Jamaican born and bred, that she wasn't English, but Jamaica at the time was a British colony, it wasn't independent, she would have been a British citizen (as were my grandparents who were born in Barbados). Her contribution might not have been forgotten in the Caribbean but it certainly was in Britain, and most Americans probably have never heard of her.
February 28, 2012 at 11:45 AM

zirconelle said…
Sorry about the double message, don't know what happened there. You said your grandparents were from Barbados? Do you know where exactly? I still live in Barbados, there are Mahons in my district, they have own a plantation for generations.
February 29, 2012 at 11:14 PM

Elizabeth Kerri Mahon said…
I mentioned on the podcast that Mary was from Jamaica. My father's family were from I think St. George Parish? I've never been to Barbados, and I've always wanted to go.
March 1, 2012 at 12:47 PM