February 17, 2012
I had mentioned a few months ago the possiblity of a Scandalous Women podcast or radio show.  Well, on this Sunday, February 19th, will be the first episode of Scandalous Women on BlogTalk Radio. I and my special guest, author Leanna Renee Hieber, will be talking about The Two Ellens of Victorian Theatre, Ellen Terry, and Ellen Ternan. You tune in live to listen at 4:30 p.m. ET or catch up with the show later in the week.

Ellen Terry was one of the most famous actresses in the 19th century; her partnership with Sir Henry Irving thrilled theatregoers for years.  Ellen Ternan, also an actress, was the mistress of author Charles Dickens. Since this February marks the 200th anniverary of Dickens's birth, it seemed fitting to discuss one of the more significant women in his life. 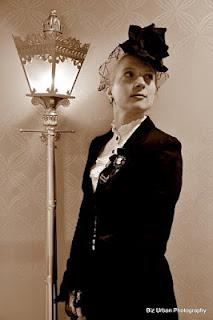 About Leanna Renee Hieber:
Author, actress and playwright Leanna Renee Hieber graduated with a BFA in Theatre, a focus in the Victorian Era and a scholarship to study in London. She adapted works of 19th Century literature for the stage and her one-act plays have been produced around the country. Her novella Dark Nest won the 2009 Prism Award for excellence in the genre of Futuristic, Fantasy, or Paranormal Romance. Her debut novel, The Strangely Beautiful Tale of Miss Percy Parker, landed on Barnes & Noble's bestseller lists, won two 2010 Prism Awards (Best Fantasy, Best First Book), and is currently in development as a musical theatre production with Broadway talent on board. DARKER STILL: A Novel of Magic Most Foul, first in Leanna's Gothic Historical Paranormal saga for teens (Sourcebooks Fire), hit the Indie Next List as a recommended title by the American Booksellers Association. Her books have been translated into several languages. Her short fiction has been featured in anthologies Candle In the Attic Window and Wilful Impropriety: Tales of Society and Scandal. A member of SFWA and RWA, Leanna is a co-founder of Lady Jane's Salon Reading Series in Manhattan and was named the 2010 RWA NYC Chapter Author of the Year. A member of performers unions AEA, AFTRA and SAG, Leanna works often in film and television. A devotee of ghost stories and Goth clubs, she resides in New York City with her real-life hero and their beloved rescued lab rabbit.
Ellen Ternan Ellen Terry