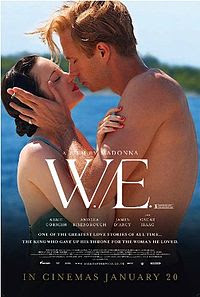 W.E. tells the story of two fragile but determined women, Wally Winthrop and Wallis Simpson, separated for more than six decades. In 1998, lonely New Yorker Winthrop is obsessed with what she perceives as the ultimate love story: King Edward VIII’s abdication of the British throne for the woman he loved, American divorcee Wallis Simpson. But Winthrop's research, including several visits to the Sotheby's auction of the Windsor Estate, reveals that the couple's life together was not as perfect as she thought. Weaving back and forth in time, the film intertwines Wally's journey of discovery in New York with the story of Wallis and Edward, from the glamorous early days of their romance to the slow unraveling of their lives in the decades that followed.

I saw this early Sunday morning. So why has it taken me until Thursday to write my review? Because there were so many other interesting things to do with my time; like my laundry, reading, or catching up on my night-time soaps. It’s not that W/E was a bad film; it just wasn’t a particularly good one either. I really wanted to like this film. I’ve been a fan of Madonna from the very beginning of her career, and I’ve always been a little bit obsessed with The Duchess of Windsor. From the first episode of Edward & Mrs. Simpson on PBS, I have been hooked on the story of the King who gave up his throne for the Baltimore Belle. So how can I fault Madonna for her own obsession with the story?

The problem lies in the construction of the film. Madonna frames the story of Edward and Wallis with a contemporary story of a southern belle named Wally Winthrop. In interviews, she has stated that she wasn’t interested in just telling the story of the couple; she wanted to filter their story through a contemporary woman who finds her own way to happiness while investigating the story. Unfortunately, Wally’s story suffers in comparison to the more dynamic story of Wallis. Contemporary Wally wears a lot of chic black outfits that wouldn’t look out of place on the Duchess of Cambridge. Wan and pale, she’s like a somnambulist, sleepwalking through her life. Her rich doctor husband doesn’t want her to work, so instead of volunteering or going back to school, she spends her days obsessing over having a baby, and staring wide-eyed at the objects from the Sotheby’s auction of the Windsor estate. Her husband is an asshole for no other reason than the screenwriters have said he’s an asshole. There’s a lame attempt to equate him with Wallis’s first husband, Earl Winfield Spencer that doesn’t quite come off. At one point, Wally’s identification with her namesake leads her to start wearing her hair like the Duchess.

The film comes alive when the story shifts to the past. Wallis (as played by Andrea Riseborough) is vibrant with a brittle charm that clearly masks the little girl who grew up in genteel poverty. This Wallis is clearly making her way in the world the only way she knows how; by marrying her way through it. This Wallis is a realist; she knows that she knows no beauty, so her only weapon is to dress well. At times Wallis speaks to contemporary Wally as if the past and the present were overlapping. When that happens, the audience realizes just what a drip Wally is. The one intriguing thing in the whole film is the moment when Wally points out to Evgeny, the hot Russian security guard, that no one ever talks about what Wallis sacrificed to marry Edward. I found that interesting and the point of the whole movie sort of crystalized.

The film is sumptuous to look at; no expense was spared on recreating the look of the period, down to recreating some of Wallis actual outfits such as her wedding dress, and a few iconic pieces. However, the film feels hollow at the core, all flash and surface and not enough substance. Another problem is that the continuity is off when the film flashes back to the past, particularly in the events leading up to the abdication. There are events that are captioned 1936 that clearly happened before then.

For the most part, the film is well cast. Andrea Riseborough is picture perfect as Wallis but James D’Arcy, besides being way too tall to play Edward, has none of the charm or the Peter Pan like qualities that made him so attractive. Poor Laurence Fox and Natalie Dormer try in their few scenes but it’s hard not to compare them to Colin Firth and Helena Bonham Carter who played the same roles in The King’s Speech. Abby Cornish, her hair dyed jet black, spends most of her time fading into the woodwork until her later scenes with Evgeny. Madonna has talent as a director; it’s a shame that she didn’t trust her story.

My verdict:  Wait until it's out on Netflix
Edward VIII Madonna Wallis Simpson

Elizabeth said…
Love your review! I have really been wanting to see this, as I have always been intrigued by the Abdication Crisis. Thanks for your honesty in your review. I probably will wait for it to come to Netflix/Rebox :)
February 16, 2012 at 9:02 AM

strat said…
It changed my point of view after watching the film.
small business loans
February 17, 2012 at 2:23 AM

Evangeline Holland said…
Great review Elizabeth. Like you, I'm a fan of Wallis's story, and Madonna has always intrigued me, so I was eager to see this film. It's funny how you mentioned how boring the Wally scenes were in comparison to Wallis's story--everyone (including me) have the same complaints about the Julie parts of Julie & Julia! Since I haven't set foot inside a movie theater in nearly five years, I'm content to wait for it to show up on Netflix.
February 21, 2012 at 10:38 AM

Elizabeth Kerri Mahon said…
I agree with you about Julia & Julia. Loved all the scenes with Julia Child and hated all the contemporary scenes. While you're waiting for W/E on Netflix, watch Edward & Mrs. Simpson again. I think Edward Fox managed to capture Edward perfectly!
February 21, 2012 at 4:19 PM