The Love Story that Changed History – Richard and Mildred Loving 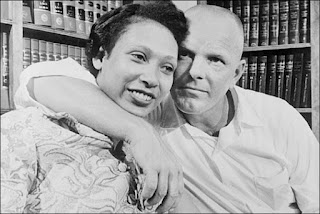 ﻿“When any society says that I cannot marry a certain person, that society has cut off a segment off my freedom,” Rev. Martin Luther King Jr., 1958.

"I am still not a political person, but I am proud that Richard's and my name is on a court case that can help reinforce the love, the commitment, the fairness, and the family that so many people, black or white, young or old, gay or straight seek in life. I support the freedom to marry for all. That's what Loving, and loving, are all about." Mildred's "Loving for All" statement, 6/12/07 - Source: Freedomtomarry.org


It seems appropriate on Valentine’s Day to celebrate the life and marriage of Richard and Mildred Loving. The Lovings were two people who never set out to change the law, nor were they activists in any way. They were just two crazy kids in love who wanted to get married. “We both thought about other people,” Richard Loving said in an interview with LIFE magazine in 1966, “but we are not doing it just because somebody had to do it and we wanted to be the ones. We are doing it for us.”

The year was 1958; Eisenhower was midway through his second term in office, Elvis was in the army, Michael Jackson would be born in August, the European Economic Community was founded, 14-year-old Bobby Fischer wins the United States Chess Championship. Artists like Jerry Lee Lewis, Chuck Berry, Bobby Darin, Connie Francis, the Everly Brothers and Ricky Nelson were climbing the charts. On the Road by Jack Kerouac had been published the year before. In February Ruth Carol Taylor was the first African American woman hired as a flight attendant. It was the twilight of the post-World War II era before the explosion of the Swinging Sixties.

On June 2, 1958, Richard Loving (1933 - 1975), who was white, and his part-black, part-Cherokee fiancée Mildred Jeter (1939 - 2008) travelled from Virginia to Washington, D.C. to be married. It was a shot-gun wedding, Mildred, 18 years old was pregnant. The young couple had known each other since she was 11 and he was 18 but it wasn’t until years later that their friendship turned to romance. No one in Caroline County, VA thought it was odd. The area was known for friendly relations between the two races, many people were clearly of mixed race. Ebony Magazine in an article published in 1967 reported that black “youngsters easily passed for white in neighboring towns.”

Five weeks after their wedding, the newlyweds were in bed in their house on the morning of July 11, 1958, when the county sheriff and two deputies, acting on an anonymous tip, burst into their bedroom and shined flashlights into their eyes. A threatening voice demanded, “Who is this woman you’re sleeping with?” Mildred replied, “I’m his wife.”Richard then pointed to the marriage certificate that hung on the bedroom wall. The sheriff replied with a sneer, “That’s no good here.”

The couple was arrested, and after several nights in jail, they pled guilty to violating the Virginia law called “The Racial Integrity Act.” The indictment read “cohabiting as man and wife, against the peace and dignity of the Commonwealth.” At the time, interracial marriage was still illegal in 24 states, including Virginia. The Virginia law had been on the books since 1662, adopted a year after Maryland enacted the first statute against interracial marriage. At one time, 38 states had similar laws against miscegenation. It wasn’t until 1948 that the California Supreme Court became one of the first to overturn the law in their state.

To avoid a jail sentence, the Lovings’ agreed to leave the state; they could return to Virginia, but not at the same time, for a period of 25 years. They paid the court fine of $36.29 each. Living in exile in D.C. with their three children, the Lovings’ missed their families, friends, and their life in the familiar surroundings of the Virginia hills. In 1963, Mildred wrote a letter to the then Attorney General Robert F. Kennedy asking for help. He wrote her back suggesting she get in touch with the American Civil Liberties Union. 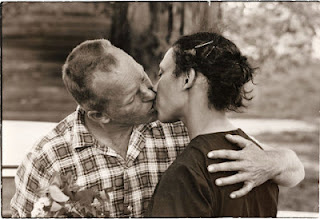 Richard Loving kissing wife Mildred as he arrives home from work, King and Queen County, Va. ● April 1965 (© Estate of Grey Villet)
Two lawyers from the ACLU, Bernard S. Cohen and Philip J. Hirschkop, took the case. Hirschkop was only two years out of law school at the time. Despite their inexperience, they were aware of the challenges they faced at a time when many Americans were still vehement about segregation and maintaining the "purity of the races." A handful of similar cases to the Lovings had come up before in other states and had crashed and burned. However, the 1964 Civil Rights Act was beginning to change all that. The first problem the two lawyers faced was that the Lovings had pleaded guilty and therefore had no right to an appeal. So Cohen filed a motion to vacate the judgment on the Lovings' original conviction and set aside the sentence.

Local Judge Leon Bazile denied the motion, stating, “Almighty God created the races white, black, yellow, Malay and red, and he placed them on separate continents. And but for the interference with his arrangement there would be no cause for such marriages. The fact that he separated the races shows that he did not intend for the races to mix.” After the Virginia Supreme Court responded with similarly antiquated and racist sentiments, Cohen and Hirschkop seized the opportunity to take the case to the U.S. Supreme Court.

Although the odds of getting a case heard by the Court were slim, Cohen and Hirschkop learned that Loving v. Virginia would be heard on April 10, 1967. In oral arguments, the State compared anti-miscegenation statutes to the right to prohibit incest, polygamy, and underage marriage, claiming that children are victims in an interracial marriage. Hirschkop argued that laws must treat each citizen equally, and that “when a law is based on race, it is immediately suspect and the burden is shifted to the state to show there is a compelling interest to have that sort of racial differentiation.” And though the Lovings chose not to attend, Cohen may have made the most compelling case by relaying to Chief Justice Warren and his fellow judges Richard's simple message: "Tell the court that I love my wife, and it is unfair that I can't live with her in Virginia."

After a two-month wait, the U.S. Supreme Court ruled unanimously in favor of the Lovings on June 12, 1967, citing that Virginia’s law violated the 14th Amendment to the United States Constitution. This precedent-setting decision resulted in 16 states being ordered to overturn their bans on interracial marriage. Alabama was the last holdout, finally repealing its anti-miscegenation law in 2000. After the ruling, Richard told EBONY magazine, “For the first time, I could put my arm around her and publicly call her my wife.” June 12 has become known as Loving Day, an unofficial holiday with events around the country to mark the advances of mixed-raced couples. Unfortunately Richard and Mildred Loving didn’t have long to celebrate their landmark victory. Richard was killed in 1975 when a drunk driver hit their car. He was 41. Mildred died of pneumonia in 2008, a year after the 40th anniversary of the Supreme Court decision. She was 68. Although she and the sheriff who had arrested them lived in the same Virginia town for decades, they never exchanged a single word. Mildred never thought she had done anything extraordinary. “It wasn’t my doing,” she told the Associated Press in 2007. “It was God’s work.” 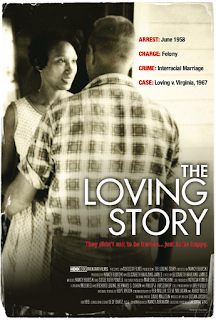 Tonight HBO will honor the story of the Lovings with a documentary entitled “The Loving Story.” And the International Center of Photography in New York City has an exhibit of photographs taken of the couple for LIFE Magazine in 1966. Looking at these photos, it’s hard to believe that anyone would want to keep this couple apart but that’s exactly what almost happened. According to the Associate Press, there are more than 4 million "mixed marriages" in the United States, and roughly one in seven new marriages are between people of different ethnicities. However, there are still people who object to interracial marriage. The sheriff who arrested the Lovings is against interracial marriage, and just a few years ago a justice of the peace in Louisiana refused to marry an interracial couple because he didn't believe in it.

Although we have come a long way in the 45 years since the Lovings took their stand but we still have a long way to go before everyone in this country has an equal right to marriage.
Richard and Mildred Loving