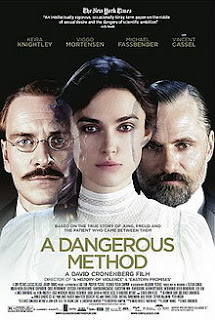 Directed by David Cronenberg
Produced by Jeremy Thomas
Screenplay by Christopher Hampton Based on his play The Talking Cure (which was based on A Most Dangerous Method: the story of Jung, Freud and Sabina Spielrein by John Kerr published in 1993)

My thoughts:  I saw this film over a week ago at Lincoln Plaza Cinemas, a small art house theatre here in New York, on Martin Luther King day.  Instead of writing my review immediately, I decided to let the movie simmer awhile. I'd also been going through some personal stuff which took my focus away from writing for a bit. I have to admit that my views on the film are somewhat colored by the fact that I have always leaned more towards Jung's theories than Freud's, ever since I first read about the two men in my high school psychology class.

A Dangerous Method is based on the turbulent relationships between Carl Jung, founder of analytical psychology, and Sigmund Freud considered to be the founder of the discipline of psychoanalysis, and a young patient of Jung's, Sabina Spielrein who later became a physician and one of the first female psychoanalysts.  The film starts in 1904 where Jung is working at the Burgholzi Hospital in Switzerland. A young Russian woman, Sabina Spielrein, arrives as a new patient.  She seems to be suffering from hysteria, which was one of those all-purpose diagnoses at the time. Contorting her body in impossible positions as she were being hit by hot poker, Spielrien's condition turns out be a great deal more complex than anyone realized. Employing Freud's controversial 'talking cure,' Jung soon discovers what has her knickers in a twist as it were.  Soon Sabina becomes much more than a patient, she begins assisting Jung with his treatments as well as attending medical school. Before long the two have become lovers, beginning what would become a pattern in Jung's life. At the same time, Jung has struck a correspondance with Freud, sharing details of his work with Spielrien.  The two men eventually meet, and Freud takes the young psychoanalyst under his wing, believing that Jung could be the future of psychoanalysis. But their friendship soon founders as Jung begins to move away from Freud's theories, developing his own unorthodox methods. Spielrien is caught in the middle between these two powerhouse men as she struggles to find her way in a male-dominated field.

While I found the subject of the film endlessly fascinating, I also found watching this film incredibly frustrating. My frustrations stem mainly from the treatment of the women in the film. For example, in the film, Emma Jung is portrayed as the dutiful little wifey, rather bland, whose sole function is to have babies and to provide a large fortune for Jung. There is no mention in the film that Emma Jung was a psychoanalyst in her own right, that she wrote books, or that she carried on her own correspondance with Freud, nor that at one point, Jung was treating his own wife!  As for Spielrein, apparently sleeping with Jung, was enough to cure her and send her on her merry way to medical school. I would have liked the film to have delved deeper into what drew Jung to Sabina, besides her being an interesting test case for him.  Was it her intelligence?  The kinkiness of their relationship? Little is made of Freud's own relationship Spielrein or how her own work eventualy informed both Freud and Jung's, particularly the death instinct. It's just sort of mentioned and brushed aside. There is one telling moment, when Freud suggests that Spielrien forget Jung and find a nice Jewish husband.

The film is on surer footing when it focuses on the relationship between Freud and Jung, and the tensions that ultimately led to its demise. The relationship between Freud and Jung is initially that of mentor and disciple.  Freud hopes that Jung would eventually lead the psychoanalytic movement, proving that it was more than just a Jewish 'science' and into the mainstream. But Jung goes rogue, dabbling in astrology and spiritualism, and developing his own theories which began to conflict with Freud's. One of those tensions was Jung's relationship with Sabina, and how Jung basically lied to Freud about it, claiming that Sabina was lying when she said they were lovers, to the point of saying that she was suffering from delusions. Nice guy! The unraveling of their bromance, and not the triangle between Freud, Jung, and Spielrein, is the most compelling aspect of the film.

That both Michael Fassbender (as Jung) and Viggo Mortenson (as Freud) give stellar performances is a given. Fassbender starts of the film as this sort of uptight figure, clearly the son of a Presbyterian minister, who slowly starts to indulge his appetites.  There is a telling scene when he visits Freud at his home for dinner. As they talk, Jung keeps piling more and more food on his plate, as the Freud's look on horrified, wondering if there is going to be anything left for them to eat! Mortenson is almost unrecognizable as Freud, his face obscured by the constant cloud of cigar smoke. However I found myself most impressed by Keira Knightley's performance as Sabina. On the surface, the role doesn't seem to be a natural fit.  Knightley is generally cast in films where she gets to look beautiful and wear great costumes, as an unobtainable object of desire, but as Sabina she had to convincingly play a woman who was afraid, tormented, and filled with guilt and disgust. In the beginning of the film, Sabina is like a wild animal, unable to be tamed until she finally admits to the secrets that she has been keeping. It is a remarkably mature and assured performance from Knightley.  A shame that in came in a year when there were so many great performances by women in film. I was amazed when I read in an article that Julia Roberts was originally offered the role.

My verdict:  I give the film a thumbs up for the relationship between the two giants of pyschoanalysis, and a thumbs down on the portrayal of Emma Jung.
Carl Jung Sabina Spielrein Sigmund Freud

Evangeline Holland said…
I know it's cool to rag on Keira, but I'm a huge fan and I feel absurdly glad that you found her acting quite good. I hope this (and other buzzed about movies like My Week With Marilyn) finds its way to DVD soon!
January 27, 2012 at 10:21 PM

Elizabeth Kerri Mahon said…
It's nice to see her growing and picking more challenging material. I still don't think she's ready to play Anna Karenina, certainly not with Aaron Johnson as Vronksky. Yeesh! But well done in this film.
January 30, 2012 at 12:41 PM

Erin said…
I'm so excited to see Keira's performance in 'Untouched' which is another movie on Effie Gray and her relationships with (or lack there of) John Ruskin and John Everett Millias.
June 17, 2012 at 1:39 PM