Book Review: At The King's Pleasure 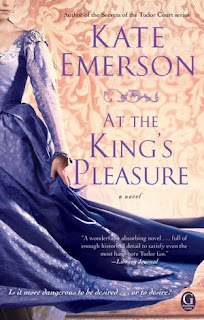 
Married to one man. Desiring another. Beautiful Lady Anne Stafford, lady-in-waiting to Queen Catherine of Aragon, is torn between her love for her husband, George, Lord Hastings . . . and the king’s boon companion, the attentive Sir William Compton. But when King Henry VIII, amorous as always, joins the men clustering around her, Anne realizes she has become perilously enmeshed in the intrigues of the court. Will she be forced to decide between the two men she desires—and the one she doesn’t?
My thoughts:  At The King's Pleasure was my first encounter with The Secrets of The Tudor Court series by Kate Emerson, and there were many things that I really liked about this book, and as well as several things that just didn't work for me. Emerson has a real feel for the period, not just the historical background but the small things, the sights, sounds and smells of the time. She is a master at evoking all five senses in her writing. The novel was like a backstage peak as it were of some of the minor courtiers who don't get much play compared to the big names of the Tudor period.  I enjoyed the few glimpses that the reader was given of the young Henry VIII, barely out of his teens and still wet behind the ears.  The book starts at the beginning of his reign and ends in the year 1520 with the execution of the Duke of Buckingham, a cousin of the King.

Lady Anne Stafford was an appealing heroine, feisty, stubborn and opinionated but also fiercely loyal. At the beginning of the novel, she is widowed and living at home with her brother and his family.  Another marriage is arranged, this time with George Hastings, who is 4 years younger than Anne.  At first Anne is unsure of the match, but she quickly realizes that while George is not quite as exciting as say, William Compton, he is stable and dependable, and the couple have great sex. Anyone who has watched the Showtime series The Tudors will probably remember her story.  In the series, Anne and Henry have an affair, and when her brother The Duke of Buckingham finds out, he is livid.  In Emerson's retelling of the story, Anne is innocent of the affair, but neither her brother nor her husband George Hastings is willing to believe her.  She is dragged away from court and shut up in a convent, after just discovering that she is pregnant with her first child. Despite her predicament, Anne doesn't take her situation lying down as it were.  She actively tries to change her situation. She even manages to forgive her husband for his doubts about her fidelity, certainly much quicker than I would have forgiven him!

The biggest weakness in the novel for me were the men.  Neither George Hastings, nor Will Compton, were appealing to me. I found George's continued jealousy over the years annoying to say the least, and Will Compton, although he knows that Anne is married, still continues to pursue her.  I found his behavior unpalatable and a bit stalkerish to tell the truth. The book also has the problem of the sagging middle, at least for me.  After the first excitement over Anne's predicament with her husband and brother, the book settles into a bit of a routine.  Anne and George have babies, they go to court, Anne flirts with Will Compton, George gets jealous, Anne placates George, lather, rinse, repeat.  Even when Anne finally succumbs to Will's advances, the affair is remarkably short-lived (although of course they have great sex).  She spends a few pages, lamenting that she's torn between two lovers, feeling like a fool, and then she's over it. Not even an inconvenient pregnancy to hide!

The characters spend a great deal of time being told about all the interesting things that are happening at court, like Henry's affair with Bessie Blount, and later his affair with Mary Boleyn, but we never actually see any of this. The chapter headings don't help, you finish one chapter and then discover that only a month has passed in the next chapter. I found myself looking foward to the scenes between Edward, the Duke of Buckingham and his mistress. If there can be said to be a villain in the novel that would be Edward Stafford, The Duke of Buckingham (is there something about the title. The Villiers Dukes of Buckingham were rogues and villains).  Descended from Edward III, he was also the son of Elizabeth Woodville's sister Katherine.  At the opening of the novel, he is the only non-royal Duke in the kingdom and very conscious of his position.  Soon others, such as Charles Brandon, receive honors that Stafford feels should be rightly his.  He's none too happy when both Brandon and Howard become the Dukes of Suffolk and Norfolk respectively. And don't even mention Cardinal Wolsey to him! (Imagine what the Duke would have made of Cromwell!).

Although there are some interesting moments at the Field of the Cloth of Gold, mostly involving Will Compton's bitter wife, the action in the book picks up pace again as events start spiralling out of control for The Duke of Buckingham.  Anne proves her loyalty to her brother, who has done nothing to deserve it.  Despite the back cover copy, the title of the book is most apt.  Everyone in the book is subject to The King's Pleasure, whether they like it or not.

The verdict: While this book wasn't a 'wow' for me, I would still consider picking up another book in the series.  I enjoyed getting to know the minor members of the Tudor Court.  Anne had some nice moments with Elizabeth Boleyn, mother of Anne and Mary, at court, giving us a rare glimpse of the woman known mainly for her children.
Henry VIII Lady Anne Stafford The Duke of Buckingham