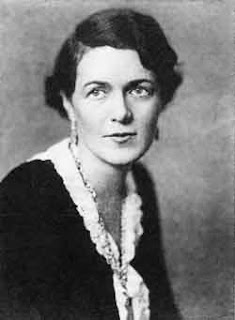 
Imagine you are a 19 year old debutante in 1910 about to attend a ball. You put on a fabulous couture dress from Paris, only to discover that your corset cover is sticking out over the top of your sheer evening gown. What is a girl to do? Well, if you are Mary Phelps “Polly” Jacobs, you throw off your restrictive corset cover and have your maid fashion help you fashion an undergarment out of two handkerchiefs sewn together with pink ribbon and cord. Voila! You have created your own bra! The new undergarment was soft and light and conformed to the wearer better than a corset which had a tendency to create a uniboob. Polly’s new undergarment complimented the fashions of the time which were less restrictive than the previous Victorian fashions which required women to be trussed up like a chicken to get into them. When she showed her friends her new design, they, of course, all wanted one. Before she knew it, Polly was in the bra-making business. It wasn’t until a stranger offered her a dollar for one of her contraptions, that she started thinking that she could really make some money from it.

Nothing in Polly’s background suggested such a ground-breaking achievement. She was born into a world of power and privilege if not wealth, amongst her ancestors was William Bradford, the 1st Governor of the Plymouth colony, another was a General Walter Phelps, who commanded troops in the Civil War at the Battle of Antietam. Her family was well-off, but certainly not in the same league with the Astor’s or the Vanderbilt’s. Polly once wrote that her father had been raised, as she put it, "to ride to hounds, sail boats, and lead cotillions," and they divided their time between a house in New York, an estate in Connecticut and one in New Rochelle, NY. She went to the best schools (Chapin, Rosemary Hall), danced at cotillions, and even met King George V in 1915 at a garden party in London. When it came time to marry, it was to another blueblood, Richard Peabody, whose family had settled in New Hampshire in 1635. 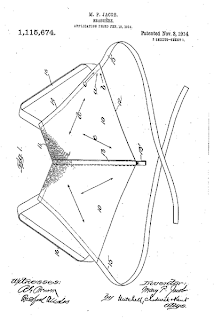 Polly Jacob didn’t actually invent the brassiere. There had been attempts as far back as the 1860’s to create an alternative to the tyranny of the corset. Parisian corset maker Herminie Cadolle in 1889 invented a two-part garment much like a bikini but her design seems to have been known mainly to her customers. Later in 1893, Marie Tucek patented the first bra, her device included separate pockets for the breasts and was fastened by hook and eye closures, but she apparently failed to successfully market her invention.

Polly was the first to patent an undergarment named 'Brassiere,' which derived from the old French word for 'upper arm'. Like the bras that most of us wear today, her design had shoulder straps that attached to the bra’s upper and lower corners, but it also had wrap-around laces which tied in the front, allowing the wearer to wear gowns that were cut low in the back. It was wireless so it didn’t offer much in the way of support. In her application, she noted that her invention was “well-adapted to women of different size” and was “so efficient that it may be worn by persons engaged in violent exercise like tennis.” She received her patent in 1914, the same year that she married Peabody.

It was an invention whose time had come, not only was the fashions less restrictive but during WWI, the U.S. Government requested that women stop buying corsets to conserve metal. Polly named her new company the Fashion Form Brassiere Company which was located on Washington Street in Boston. There with a staff of two, Polly began manufacturing her wireless bra. While Polly managed to snag a few orders from department stores, her business never really took off. Her marriage to Peabody was also failing. They had two children, but Peabody came back from the war with two unfortunate hobbies: drinking and watching buildings burn. Polly fell hard for another blue-blooded, hard-drinking WWI vet named Harry Crosby. Their affair scandalized New York and Boston society but Polly didn’t care. Her office space provided cover for her trysts with Harry. In 1922, Polly divorced Peabody and quickly married Harry, who had no taste or interest in conventional business. Since he had a generous trust fund, he discouraged her from working and convinced her to close the business. Later, she sold the patent to the Warner Brothers Corset Company for $1,500 (about $20,000 today). Warner’s then went on to make over $15 million dollars with the design over the next 30 years before they eventually phased out the design.

After their marriage in 1922, Polly (now renamed Caresse thanks to Harry) and Harry moved to Europe were they led a “mad and extravagant life,” filled with drugs, drinking and numerous affairs on both sides. Their decadent lifestyle lasted until Harry’s murder/suicide with his young lover, Josephine Noyes Rotch in 1928 (and that’s a whole other scandalous story!). Caresse continued her writing and publishing work with Black Sun, the publishing company she had founded with Harry. During its years of operation, it published everyone from D.H. Lawrence, Archibald MacLeish, and Henry Miller to Ezra Pound.

In 1937, she married Selbert Young, a retired football player and sometime actor who was 18 years younger, and moved to Washington, D.C. where she opened an art gallery and started a magazine called Portfolio. After her third marriage collapsed, she spent her final years in Rome, where she planned to create an artist colony. She died in Rome in 1970, at the age of 78, but she lived long enough to see the bra go through a number of transformations (although unfortunately not Victoria’s Secret million dollar bras!). How ironic that something that was meant to liberate women, was later seen as a symbol of oppression!