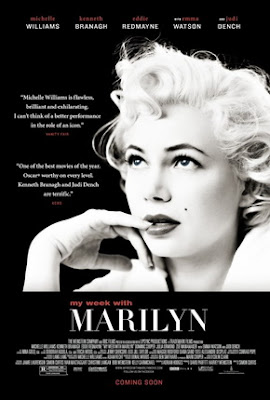 Directed by: Simon Curtis
Written by Adrian Hodges based on the memoirs of Colin Clark
Produced by David Parfitt, Harvey Weinstein, The Weinstein  Company and BBC Films

Synopsis: In the summer of 1956, and 23 year old Colin Clark is looking for a job as an assistant on a film.  He talks his way into a job working as the 3rd Assistant Director on the British film of The Prince and the Showgirl (based on the The Sleeping Prince by Terrence Rattigan), starring Knight of the British theatre Laurence Olivier and American film star Marilyn Monroe, who is also on honeymoon with her new husband, playwright Arthur Miller. Things on the set start rocky and get worse as Marilyn's insecurities get the best of her.  Olivier is frustrated by her lateness and her dependence on her acting coach Paula Strasberg, wife of Method guru Lee Strasberg. When Arthur Miller leaves the country to do some work, Marilyn begins to rely on Colin to keep her company.  Olivier tells Colin to do anything to make Marilyn happy and get her to the set on time. Colin, who of course falls immediately under Marilyn's spell, introduces her to th wonders of British life as they spend a week together, during which time she escapes from the pressures of work. But the idyll has to end, leaving Colin sad but happy with his memories of the magical time that he spent with Marilyn.

My thoughts:  I read Clark's memoirs when they first came out back in the 1990's on a trip to England. Like many people, I've been fascinated with Marilyn Monroe since childhood. I've read pretty much every book ever written about her, her combination of sexuality and vulnerability has rarely been duplicated by any actress. So when I heard that they were making a movie out of the book, I had my misgivings.  Does anyone remember the HBO movie where Ashley Judd and Mira Sorvino shared the role of Marilyn, Ashley played the pre-nose job, pre-blonde Marilyn as a tough cookie, while Sorvino played the later Marilyn.  It didn't really work, and I've avoided biopics about Marilyn ever since.  Still, I couldn't help but wonder, especially given the cast that had been assembled for the film.  The movie premiered at The New York Film Festival but I wasn't not paying $50 to see the film.  However, when the film opened the day before Thanksgiving, I thought I would make it my Thanksgiving film.

I'm happy to see that my fears weren't realized, although at first I was worried, the first few scenes were not promising.  Initially, they just seemed a catalog of Monroe stereotypes, breathy voice, the giggle, as the film progresses, it goes deeper into Monroe's psyche as Colin gets to know the real Marilyn. Michelle Williams doesn't do an impersonation of Marilyn Monroe, she is Marilyn from the tips of her platinum blonde locks to the wiggle in her walk.  Williams has said in interviews that she spent six months not just reading Monroe biographies but also studying her walk and her vocal inflections, and it paid off. However, her work clearly went deeper than that. Williams captures Marilyn's fears, her vulnerability, her neediness, vanity, foolish, and her ability to turn the character that she called 'her' on and off when necessary. Marilyn's emotions are never very far from the surface, and Williams has the ability to portray her ability to turn on a dime from sadness to happiness in the blink of an eye. The scene where she reads her husband's work and realizes that he's created an unflattering portrait of her are devastating.

This film is a coming of age story with Colin Clark, played by the dynamic Eddie Redmayne, going from a boy who is unsure about what he wants to do with his life to a man. It's lovely to see his fumbling attempts to woo Lucy, the wardrobe assistant played by Emma Watson, and to defy the low expectations of the filmmakers who see him as just a gopher initially. Some of the best scenes in the film are when he goes above and beyond the call of duty much to the chagrin of his bosses.

Both Colin and Marilyn have to deal with expectations, for Colin it has to do with having a famous father, art historian Sir Kenneth Clark, and a famous brother, conservative politician and military historian Alan Clark.  For Marilyn, it's the expectations of the public and her fellow actors.  On the Prince and the Showgirl, she worries that she's not good enough to work with the English actors in the cast, most of whom are theatre veterans.  Dame Judi Dench does superb work as usual in the small role of Dame Sybil Thorndike, who goes out of her way to make Marilyn feel welcome on the set, something that Olivier seems incapable of doing.

At first Kenneth Branagh seemed miscast as Laurence Olivier, he's shorter, blonder, doughier with no upper lip, but he manages to capture the impatience, and the narcissism of a man who has been told that he's the greatest actor in England, and feels that his poop doesn't stink. When Olivier has to eat crow later in the film, acknowledging that Marilyn has a gift for film acting that he doesn't possess, it's brilliant. Of course the film is peopled with wonderful actors in supporting roles such as Sir Derek Jacobi, Simon Russell Beale, Toby Jones, and Michael Kitchen.  Zoe Wanamaker almost steals the film as Paula Strasberg.  One longs for someone to make a film out of Susan Strasberg's memoir about what it was like to have her parents virtually adopt Marilyn, neglecting the needs of their own children. Only Dominic Cooper is miscast as Milton Greene, Marilyn's former lover and business partner.  He's too young for the role and lacks the gravitas for the part.  Unfortunately Dougray Scott is given very little too do as Arthur Miller.

While the film is not quite as emotionally satisfying as The King's Speech, it does evoke nostalgia for a time and a world that no longer exists.  The film rests squarely on the more than adequate shoulders of Michelle Williams and Eddie Redmayne.  It was a more than pleasant way to spend my Thanksgiving.

Robin's Egg Bleu said…
I saw it yesterday and I thought it was very well done! I really enjoyed Redmayne and want to see more of him. Williams did a fabulous job of 'being' Marilyn. I loved the cinematography and overall ambience.
November 27, 2011 at 9:38 AM

Violet said…
The acting seems very good, but i don`t know if I can trust the story.
I means, it is not so hard to make a fictional story about you having a love affair with one of the words most beautiful and famous women.
November 28, 2011 at 1:52 PM

Elizabeth Kerri Mahon said…
I definitely think that Michelle Williams has a shot at a nomination.

Violet, it's more of an emotional love affair. Colin is very much smitten with her, but he then falls for the real woman, that he discovers.
November 28, 2011 at 2:23 PM

Violet said…
Hey, Elizabeth Kerri Mahon.
Perhaps your right, it is hard to seperate myth and reality about Marilyn.
Great blog by the way:)
December 1, 2011 at 3:04 PM