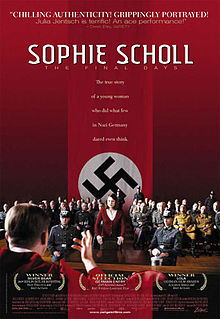 Arrested for participating in the White Rose resistance movement, anti-Nazi activist Sophie Scholl (Julia Jentsch) is subjected to a highly charged interrogation by the Gestapo, testing her loyalty to her cause, her family and her convictions. Based on true events, director Marc Rothemund's absorbing Oscar-nominated drama explores maintaining human resolve in the face of intense pressure from a system determined to silence whistle-blowers.


My thoughts: I've been intrigued by World War II partly because my father and uncle were in the army and navy respectively during the War.  Neither of them would talk to me about their experiences, so I've become a little obsessed over the years at reading and watching films and documentaries.  Most of my reading has been focused on England and America, but recently I've become more interested in what was going on in France and Germany.  I don't remember when I first heard the name Sophie Scholl. It may have been while browsing through the Dramatist Play Service catalog and reading the description of Lillian Garrett-Groag's play The White Rose. Recently I found a copy of the 2005 German film Sophie Scholl - The Final Days in the library. Before I knew what I was doing, I had picked the copy off the shelf and walked over to check it out.

Words fail me to describe just how powerful and heartbreaking this film is. The film is directed almost like a thriller.  It takes place over 5 days ending in Sophie's death on February 22nd 1943, 4 days after her arrest. It opens with a charming scene of Sophie and her best friend Gisela singing along to an American jazz song on the radio.  The action quickly shifts to Sophie, her brother Hans, and their friends mailing out leaflets that they've printed out on a mimeograph machine (this was before Xerox machines.  We actually had one in my school when I was growing up). Soon they've run out of envelopes, so Hans comes up with a risky plan to take the remaining leaflets to the university while the students are in class. Hans is reminded that since the seige of Stalingrad, the university has been infiltrated by informers. Sophie offers to go with her brother to help out, since a women would never be suspected. What follows is a nail-biting scene as Hans and Sophie hurry to the university, trying to put down as many stacks of leaflets as they can before classes get out. With only minutes left, Sophie rushes to the top floor with the rest of the leaflets and impulsively pushes them over the edge of the balustrade. Thinking that they've made a clean getaway, Hans and Sophie are just leaving the building, when they are stopped by a janitor who saw Sophie in action.  They are arrested and taken to the Munich Stadelheim Prison.

We never see Hans interrogated, only Sophie who is interviewed by Gestapo investigator Robert Mohr. The two play a cat and mouse game as Sophie wisely admits to what is the truth, but denies being the one who dropped off the leaflets. She tells Mohr that it is part of her nature to play pranks, and that she was carrying a suitcase to pick up her laundry from her mother back home in Ulm (see college students brought their laundry home even back in the 1940's!). At first it looks like she's going to get away with it, but the investigation soon finds proof that she and Hans were involved. Mohr shows Sophie her brother's signed confession. Sophie soon admits what she has done that and that she is proud of it. It turns out that The White Rose had written and distributed 5 Anti-Nazi leaflets calling for passive resistance prior to the one they dropped at the University (Sophie was not involved in the writing of the pamphlets, just the distribution). In their second interrogation, Mohr takes more of a fatherly attitude towards Sophie. He admonishes her for breaking the law, considering that the Reich has paid for her education.

Sophie is not buying it. She reminds him that pre-1933, people still had free speech.  She tells him about the rounding up of the mentally ill as well as the Jewish population to concentration camps where they have been exterminated.  Mohr tells her that some lives are unworthy. Despite the fact that Sophie is only 21, in many ways she is more mature than Mohr.  She is able to match him argument for argument. You can see in their scenes together that he reluctantly admires her even though he believes that she is misguided and wrong.  Mohr offers Sophie a chance to save herself by repudiating her actions and naming names. Sophie refuses to name names and takes full blame. She insists that she receive whatever punishment her brother receives.

What follows next is a kangaroo trial. They are brought before Judge Roland Freisler in the People's Court.  Even before Sophie, Hans and another member of The White Rose, Christoph Probst are brought into the courtroom, it's clear that the verdict is a foregone conclusion. Their lawyers make no attempt to defend them, and they are barely allowed to speak in their own defense.  Sophie managed to tell the People's Court. "Somebody, after all, had to make a start.  What we wrote and said is also believed by many others.  They just do not dare express themselves as we did. "All three are pronounced guilty and sentenced to death.  However they are allowed one final statement. Sophie tells the court that "where we stand today, you will stand soon."

All three prisoners are told that their execution is that day, they are not even given the normal 99 days after their conviction before execution. Sophie, a devout Lutheran, goes to her death with dignity.  She is allowed to see her brother and Christoph Probst before their executions. She remarks as she is led out to the courtyard where the guillotine awaits her that the "The sun is still shining."

So what is movie review about a heroine like Sophie Scholl doing on a blog called Scandalous Women. Well, Sophie's actions scandalized Nazi Germany. At one point in the film, Sophie is contemptuously referred to by one of the police officers as the weaker sex. As if she had led the men astray with her misguided beliefs. She is treated by Mohr as some sort of wayward child that he can school, teaching her the true meaning of right and wrong. The idea that Sophie had a mind of her own, that she had thought seriously and thoughtfully about her actions, and even in the face of death, didn't waver, must have been mind boggling to them. Women were supposed to be the epitome of Aryan womanhood, giving birth to good Aryan children, teaching them about the glories of the Third Reich, not working underground to dismantle it.

At the end of the film we are told that after Sophie's death, another pamphlet was smuggled out of Germany, where it was utilized by the Allies. In mid-1943, they dropped millions of copies over Germany.

I urge everyone to watch this film about how one person can make a difference just by having the courage to speak out.
Sophie Scholl The White Rose World War II

Unknown said…
I urge everyone to watch this film about how one person can make a difference just by having the courage to speak out.
moviles android
March 14, 2013 at 11:15 AM