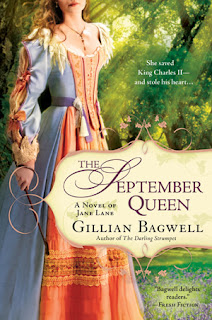 Scandalous Women is very pleased to welcome author Gillian Bagwell to the blog today to talk about her new book The September Queen which came out on November 1st. Happy Release week Gillian!

While researching The Darling Strumpet, my novel about Nell Gwynn, I read Derek Wilson’s book All the King’s Women, about the numerous women important to Charles II. As all of us who know anything about Charles II are aware, he liked women. His mistresses were many and famous, whether loved by the people like Nell Gwynn or hated like Louis De Keroualle.

So I was intrigued to read his account of Jane Lane, an ordinary Staffordshire girl who played a starring role in an extraordinary part of Charles’s life – his six-week odyssey after the Battle of Worcester trying to escape to safety in France.

The Battle of Worcester took place on September 3, 1651. Charles and his ragged and outnumbered army knew that all their hopes rested on that day, and the 21-year-old king believed that the outcome for him would be “either a crown or a coffin.” Cromwell triumphed, and the bloody rout ended the Royalist cause. Once Charles had been convinced that the best he could do was survive, he fled as his supporters made a last ferocious stand, and legendarily dashed out the back door of his lodgings as the enemy entered at the front, slipping out the last unguarded city gate.

From that disastrous night until he finally sailed from Shoreham near Brighton on October 15, he was on the run, sheltered and aided by dozens of people – mostly simple country folks and very minor gentry. One of Charles’s companions during his flight from Worcester was the Earl of Derby, who had recently been sheltered at a house called Boscobel in Shropshire. He suggested that the king might hide there until he could find a way out of England.

Jane Lane, a young woman of about 25 years old, lived at Bentley Hall in Staffordshire, not far from Boscobel. She became involved in the king’s flight because she had a pass allowing her and a manservant to travel the hundred miles to visit a friend near Bristol – a major port where the king might board a ship. In a story that sounds like something out of fiction, the 21-year-old king disguised himself as Jane’s servant, and Jane rode pillion (sitting sidesaddle behind him while he rode astride) along roads traveled by cavalry patrols searching for Charles, through villages where the proclamation describing him and offering a reward for his capture was posted, and among hundreds of people who, if they recognized him, had every reason to turn him in and none – but loyalty to the outlawed monarchy – to help him.

It was an improbable scheme. Charles was six feet two inches tall and very dark complexioned, not at all common looking for an Englishman of that time. But time after time he rode right under the noses of Roundhead soldiers without being recognized. He narrowly eluded discovery and capture so many times that the whole event eventually became known as the Royal Miracle.

Jane Lane played a much more important part in great events than women usually did in those days, especially women who were not monarchs. The fugitive king had been proclaimed a traitor, and anyone who was found to have helped him would be executed for treason. What Jane did took great bravery, as she was not only risking her life but the lives and lands of her family.

I was convinced by the evidence Wilson presented that Jane and Charles became lovers when they were in each other’s company, in close physical contact, and in perilous circumstances from September 9 to September 18, 1651. Jane remained in touch with Charles until he was restored to the throne in 1660. Then she became famous, and Charles rewarded her richly, awarding her a pension of £1000 pounds a year – quite a lot of money then – as well as giving her a watch that had belonged to his father, paintings of himself, and many other personal mementoes. He also offered her brother a title and gave her family the right to add the three Lions of England to their coat of arms. 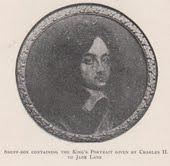 The time that Charles spent on the run was an enormously formative experience, he told the story for the rest of his life, and Jane was clearly someone who he regarded with respect and affection until his death. He When Jane returned home she married a neighbor, Sir Clement Fisher, who she had likely known before embarking on her adventures with Charles. But she had no children, and towards the end of her life she declared that her hands would be her executors, i.e., that she would spend all she had. She did more than that, and because her pension was not being paid on time, she was in debt and died with an estate worth only £10.

If Charles had been caught, he would certainly have been executed, and it is an open question whether the monarchy would have been restored as it eventually was in 1660, after the death of Oliver Cromwell. So Jane’s courage had far-reaching results and her story deserves to be remembered.

Gillian Bagwell’s novel The September Queen, the first fictional accounting of Jane Lane’s adventures with the young King Charles, was released on November 1. Please visit her website, www.gillianbagwell.com, to read more about her books and read her blog Jane Lane and the Royal Miracle www.theroyalmiracle.blogspot.com, which recounts her research adventures and the daily episodes in Charles’s escape after Worcester.

One lucky winner will receive a copy of the book THE SEPTEMBER QUEEN. Here are the rules for the giveaway. This giveaway is open solely to my American readers! The contest runs from today through Tuesday, November 8th.

Rachel said…
I've been waiting to read this- thanks for the giveaway!

Anonymous said…
This book has been on my TBR list for a while. I would love to win a copy for my collection. I am a follower.

teabird said…
Oh yes! I'd love to read this!

Gwendolyn B. said…
This sounds like such a madcap adventure - and to think that it's true! I'm really enjoying this blog tour and the guest posts. Looking forward to reading Ms. Bagwell's book for my self! Thanks for hosting.