A Talk with Philippa Gregory (and some other people) 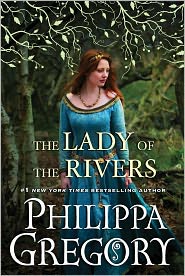 Yesterday I went downtown to the Times Center to hear Philippa Gregory talk as part of The New York Times Great Literary Conversation. Her other panelists included Lee Child (author of the Jack Reacher novels which I now have to read), Rita Mae Brown (who has written a great historical fiction novel about Dolly Madison) and Sapphire, author of PUSH (made into the film 'Precious') and the sequel THE KID.  Although the other panelist were great, I really plunked down my $30 bucks to hear Philippa Gregory talk.  Which is crazy when you think about it because I could have just heard her speak for free at Barnes and Noble!

Ladies and Gentleman, I think I'm in love! I was pretty harsh about her new book THE LADY OF THE RIVERS, and as I have stated before I loathe and despise THE OTHER BOLEYN GIRL. After hearing her speak, and discovering how witty and charming she is, I now have to continue to read her backlist (I've been wanting to read A RESPECTABLE TRADE for a long time now).  She went through the top 5 myths about Philippa Gregory and one secret. I don't remember all of the myths but the two I do remember are that a) people believe that she's from the lost island of Atlantis (no, seriously they do) and b) there are people who think she has a TARDIS in her garden by which she time travels to the past in order to write her books. You know, instead of spending a year on research, reading over a 100 books, why not just pop into a box and time travel instead! God, if only it were that easy!

And get this, she rescues ducks! She told an adorable story about how every year she takes abandoned duck eggs and keeps them warm in her study so that they can hatch.  One they mature, they either fly away or stay on her farm where they get free food twice a day.  Apparently her new duck, Rasta, needed an operation that cost 60 pounds, and she cleverly hid the news from her husband until he got the bill.  Come on, how can you not like someone who rescues duckies! And she wears groovy shoes!

Unknown said…
What an exciting event! I've never heard Philippa speak in person, but I think I've listened to all her podcasted interviews. :)
October 21, 2011 at 12:33 PM