Scandalous Women on Film - The Conspirator 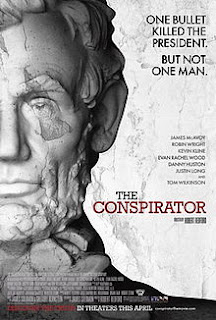 In the wake of Abraham Lincoln's assassination, eight people are arrested and charged with conspiring to kill the President, Vice President, and Secretary of State. The lone woman charged, Mary Surratt (Robin Wright) owns a boarding house where John Wilkes Booth (Toby Kebbell) and others met and planned the simultaneous attacks. Against the ominous back-drop of post-Civil War Washington, Senator Reverdy Johnson (Tom Wilkinson) who was supposed to defend Mary asks his colleague, the newly-minted lawyer Frederick Aiken (James McAvoy), a 27-year-old Union war hero, to take over as counsel.  Because he is a Southerner from Maryland, he feels that the jury will be automatically prejudiced against her.  Aiken reluctantly agrees to defend Surratt before a military tribunal.

Aiken is at first very reluctant to take the case and believes his client is guilty. However, he uncovers evidence casting doubt on the allegations and conducts a spirited defense. He realizes his client is being used as bait and a hostage in order to capture the only conspirator to have escaped a massive manhunt, her own son, John Surratt (Johnny Simmons). As the nation turns against her, Surratt is forced to rely on Aiken to uncover the truth and save her life.

My thoughts:  I had planned on seeing this film when it came out this past Spring but somehow never made it to the movie theatre, so I was quite happy to find out that my local library had a copy. I had written about Mary Surratt a few years ago, and I was eager to see how the story was dramatized. The film, directed by Robert Redford, is not really about Mary Surratt.  The film is more an indictment against the power of the Presidency and the War department who are trying Mary and her fellow consipirators in a military tribunal instead of criminal court.  Their reasoning is because the nation is still at war but really they want revenge for the death of President Lincoln, and are willing to ride roughshod over the civil liberties of the defendents to do so.

The film is also about Aiken's loss of innocence.  He initially believes that Mary is flat out guilty, and while he's sure that she was somehow involved in the conspiracy, he's appalled at how the law is being twisted and perverted. The audience watches as he grows from a green attorney into a more confident one as the trial progresses and he tries to do what little he can to save his client from a fate he now feels that she does not deserve. He also has to deal with the consequences of defending an unpopular defendent while the nation is still mourning.  It's not clear in the film that Surratt and the conspirators are actually tried a year after Lincoln's death.  The film makes it seem as if the trial takes place soon after Lincoln is buried (FYI, I stand corrected by Anonymous.  The film is correct on the timeline. Surratt and her co-consipirators were hung in July of 1865). Unfortunately, at least for this viewer, I found the documentary on the Special Features disc more compelling than this film. The film in the end is nothing more than a Civil War Courtroom drama, although anyone who knows history knows how it ends. Robin Wright is required to do no more than look stoic in her widow's weeds, and James McAvoy is full of righteous indignation at the knowledge that his client is being railroaded primarily in the hopes that her son will step forward and turn himself in to save his mother.

For a moment, I thought the film was going to create some sort of love triangle between Aiken, his sweetheart (played by Alexis Bledell as Rory from Gilmore Girls in a hoopskirt) and Anna Surratt (played Evan Rachel Wood).  Thank god, Redford and the screenwriters didn't throw that Hollywood cliche into the mix. I think I would have thrown something at the screen at that point. The film could have benefited if we had actually seen a little bit of the conspirators say conspiring. The audience gets a little hint in flashbacks, and Mary Surratt does admit that she knew that her son and John Wilkes-Booth were planning on attempting to kidnap the President.  Lucky for her, there is such a thing as attorney-client privilege.  It's hard to feel sympathy for Mary, although it is clear that her role in the conspiracy was minor, she was no more than an accessory like Samuel Mudd, who ended up with a prison sentence instead of being hanged for his role in hiding Booth and giving him medical attention, although he was the one who introduced John Surratt to Booth.

The irony in all this, is that the one person, who should hanged for his role in the conspiracy ended up getting off due to a mis-trial, that person being John Surratt. If the point of the film was to change people's minds about capital punishment, I'm not sure it was successful.  Those who oppose capital punishment will surely point to this film as an example of why capital punishment does not work, those for it will say the conspirators got what they deserved.

KT Grant said…
I saw this a few weeks ago and I'm shocked Robin Wright didn't get nominated for an Oscar. She was incredible and the cast superb.
October 3, 2011 at 10:34 AM

Cinema Nostalgia said…
I saw the movie in theaters and have to agree with the above poster
October 3, 2011 at 5:07 PM

Elizabeth Kerri Mahon said…
The film wasn't released until April of 2011, so Robin Wright wouldn't have been nominated for an Oscar for her performance until next year. I just felt that since the film is called The Conspirator, it shouldn't have been weighted so heavily towards Frederick Aiken's character (played by James McAvoy).
October 4, 2011 at 11:37 AM

Anonymous said…
Actually, Ms. Mahon, Mary Surratt was tried and executed within three months of Lincoln's assassination--not a year later, as you assert in your review. I would say this is a fairly egregious error for a self professed "history geek."
October 24, 2011 at 2:06 PM