Scandalous Book Review: The Lady of the Rivers 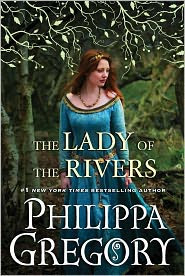 Passion. Danger. Witchcraft . . . The Lady of the Rivers is #1 New York Times bestselling author Philippa Gregory’s remarkable story of Jacquetta, Duchess of Bedford, a woman who navigated a treacherous path through the battle lines in the Wars of the Roses. Descended from Melusina, the river goddess, Jacquetta always has had the gift of second sight. As a child visiting her uncle, she met his prisoner, Joan of Arc, and saw her own power reflected in the young woman accused of witchcraft. They share the mystery of the tarot card of the wheel of fortune before Joan is taken to a horrific death at the hands of the English rulers of France. Jacquetta understands the danger for a woman who dares to dream. Jacquetta is married to the Duke of Bedford, English regent of France, and he introduces her to a mysterious world of learning and alchemy. Her only friend in the great household is the duke’s squire Richard Woodville, who is at her side when the duke’s death leaves her a wealthy young widow. The two become lovers and marry in secret, returning to England to serve at the court of the young King Henry VI, where Jacquetta becomes a close and loyal friend to his new queen. The Woodvilles soon achieve a place at the very heart of the Lancaster court, though Jacquetta can sense the growing threat from the people of England and the danger of royal rivals. Not even... .

My thoughts:  Philippa Gregory's books are hit and miss with me.  I loathed The Other Boleyn Girl (the book, and both adaptations), but I enjoyed The Boleyn Inheritance, The Red Queen and The White Queen. Unfortunately her new novel The Lady of the Rivers was both a hit and a miss for me.  I didn't find the book as compelling as The White Queen or The Red Queen.  I started reading this book over a month ago, and I kept picking it up and then putting it down, distracted by so many other things like a toddler with bright shiny objects. I'm not sure that I can put my finger on why the book was so dissatisfying to me. Perhaps I've been spoiled by all the excellent historical fiction that has been published in the last year.

I think part of the problem is that after Jacquetta marries Richard Woodville, she tends to spend a great deal of her time getting pregnant and then giving birth while events happen around her. For me, the best part of the book is the first 1/3, Jacquetta's early days, meeting Joan of Arc and how that experience transforms her, her love/hate relationship with her powers, although they seem to be confined to knowing when people are about to die. I loved reading about the legend of her goddess ancestress Melusina. Most intriguing to me was Gregory's interpretation of Jacquetta's first marriage to John, Duke of Bedford and his attempt to use her powers to find out how Henry VI's reign is going to pan out. I even enjoyed reading about her secret romance with Richard Woodville and the risk that they took to get married. Even more fascinating was the story of Eleanor Cobham, the Duchess of Gloucester, who is accused of witchcraft. Jacquetta knows that this could easily happen to her if she is not careful. The scenes where Jacquetta reluctantly uses the knowledge that she has of the old ways brings the book to life.

Another problem was Margaret of Anjou, once she appears on the scene, basically takes over every scene that she is in. Childlike, selfish, ambitious, determined, fierce, Margaret overshines Jacquetta. I longed for the scenes that she was in, and hated those times in the book when Jacquetta went back home to be with Richard. I couldn't wait for Jacquetta to be summoned back to court so that I could find out what was going on with Henry VI, Margaret and Edmund Beaufort, The Duke of Somerset. I'm sure some historians will quibble about whether or not Margaret of Anjou and the Duke of Somerset actually were lovers or not. I know that there were rumors all through out Henry VI's reign that Edward, the Prince of Wales, was not his son. I found myself yelling at the book whenever Margaret did something that I knew was going to come back and bite her on the butt.

In many ways, reading Lady of the Rivers completed the trilogy of books about the War of the Roses that started when I read Susan Higganbotham's book Queen of Last Hopes (about Margaret of Anjou) and continued with Anne Easter Smith's wonderful novel Queen by Right (about Cecily Neville). Reading all three novels, from the point of view of the women, gave me a better understanding of the conflict than reading a dry history book about the period.

My verdict:  While the novel was hit and miss for me, it is nice addition to the series that Gregory started with The White Queen.
Henry VI Jacquetta Woodville Margaret of Anjou

Marlene Detierro said…
Great review! I love the combination of the royal drama and the witchy world just beyond the tower... If this is the first book in a trilogy, and based on the life of a royal. It's a must for me. Thank you for your review Elizabeth! I look forward to your next review.