The Fabulous and Flamboyant Life of Lady Meux

I adore historical fiction, not just because I find history endlessly fascinating but because it leads me to fascinating women which I can then share with my readers. With Tasha Alexander’s new mystery, A Crimson Warning, I’ve discovered not one, but two fascinating and Scandalous Women. We’ve already met author Sarah Grand. This week, I introduce you to Valerie, Lady Meux.

She was born Valerie Susie Langdon in 1847. According to what little I could find on her, she was a butcher’s daughter from Devon who worked as an actress before her marriage. According to her obituary in the New York Times, she met Sir Henry while performing in Brighton. However, tongues wagged at the time that she had worked under the name of Val Reece at the Casino de Venise in Holborn and that she may even have been a prostitute. It was reported in the magazine Truth (love the title) that she had even lived in sin with a Corporal Reece. In her defense, Valerie wrote, “I can very honestly say that my sins were committed before marriage and not after.” You go girl! At the age of 31, she married Sir Henry Meux, 3rd Baronet (1856 - 1900), (pronounced “Mews”) in secret. Her husband‘s family had become rich through trade, they owned a brewery Meux and Co. (located where the Dominion Theatre now sits). Sir Henry’s father, the 2nd baronet, had married Lady Louisa Caroline Brudenell-Bruce, the daughter of the 3rd Marquess of Ailesbury.

Needless to say, her husband’s aristocratic relations were none too pleased at Sir Henry’s marriage to the bold and flamboyant beauty. Valerie was never accepted by them or by polite society. Thumbing her nose at the ton, Valerie flaunted her indifference by driving herself around London in a high phaeton, drawn by a pair of zebra. What I would give to time-travel back to the Victorian era to see that! While she may not have been accepted by polite society, she certainly wasn’t sitting at home knitting or crying into her soup. She attended meetings of the Theosophical Society, when Madame Blavatsky was still living in London. She was a familiar figure at art openings and first nights. Rumor has it that she even attended more than one prize fight in disguise.

Valerie improved and enlarged their country home at Theobalds in Hertfordshire with a swimming pool, and an indoor roller skating rink. She also created a stone circle at Dauntsey Park, one of their other estates (they owned several including a house in Park Lane and the Chateau de Sucy in France) that was used for theatrical productions. The parties at their country house must have been fun! At her request, her husband purchased Christopher Wren’s Temple Bar (one of the eight gates that surrounded the old City of London) from the City of London and installed at their country estate as a new gateway. It cost them a whopping £10,000 to install. There she entertained guests such as the Prince of Wales and Sir Winston Churchill in the upper chamber. The Temple Bar remained on the estate until the 1990’s when it was finally returned to the City of London. 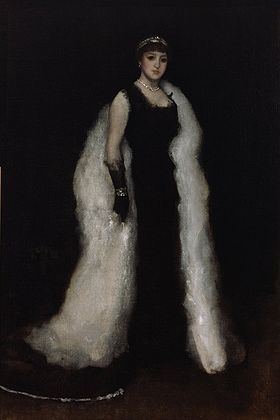 Lady Meux commissioned James McNeil Whistler to paint her portrait in 1881. It was his first commission in London after his return from exile on the Continent (he had famously sued John Ruskin in 1877 for libel. Although he won, he was awarded only a farthing and the court costs were split, and Whistler had to sell his work and his house to pay for them. The damage to his reputation lasted for years). One portrait soon turned into three for a total cost of 1,500 guineas. Whistler however proved to be too demanding and difficult for Lady Meux, requiring too many sittings for her taste. She got tired of standing around wearing her fur coat and muff while he redid portions to his satisfaction. When she complained, he went ballistic. According to Stanley Weintraub in his biography of Whistler, Valerie warned, “See here Jimmy Whistler! You keep a civil tongue in that head of yours, or I will have in someone to finish those portraits you have made of me!”

Well that went over like a lead balloon! He apparently went into a rage, muttering “How dare you, how dare you,” paint brush quivering in his hand. Valerie Meux never sat for Whistler again. He destroyed the third portrait of her, Portrait of Lady Meux in Furs, although Henry Meux, Valerie’s husband had paid for it. However, Harmony in Pink and Grey: Portrait of Lady Meux can be seen today at the Frick Museum in New York, and Arrangement in Black: Lady Meux belongs to the Honolulu Academy of Arts. In a bid to gain his wife a place in polite Victorian society, Henry bought Lady Meux the diamonds that Whistler portrayed her wearing in this painting.

Not shy about spending her husband’s money, she once spent £13,000 at the jewelers. She also owned a string of race horses, winning the Derby in 1901, and was an ardent collector of Egyptian artifacts, owning over 1,700 items including 800 scarabs and amulets. A frequent visitor to the British Museum, her intention was to leave the collection to them, but they didn’t want it (because they were apparently idiots) and it was sold after her death. Sir Henry died in 1900, leaving Valerie an income of $300,000 a year which was a great deal of money back then.

She didn’t spend all her husband’s money frivolously. During the Boer War, Valerie was impressed by the heroics during the Battle of Ladysmith. Feeling patriotic, she donated artillery that was sent straight to South Africa, because the war office refused them (again what is their problem?). According to Wikipedia, they were known as the ‘Elswick Battery,’ and were used in action several times during the war. When Sir Hedworth Lambton, the commander of the Naval Brigade at Ladysmith, returned to England, he called on Lady Meux to thank her for her generosity. She was so taken with him, that she made him the chief beneficiary of her estate, provided that he change his last name to Meux (she and Sir Henry never had any children) which he did after her death by Royal Warrant.

She died in 1910, at the age of 63.
James McNeil Whistler Lady Meux Valerie