Book of the Month: Mary Boleyn, The Mistress of Kings 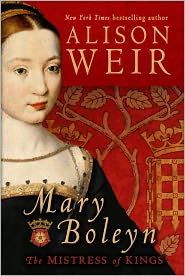 
Synopsis: Sister to Queen Anne Boleyn, she was seduced by two kings and was an intimate player in one of history’s most gripping dramas. Yet much of what we know about Mary Boleyn has been fostered through garbled gossip, romantic fiction, and the misconceptions repeated by historians. Now, in her latest book, New York Times bestselling author and noted British historian Alison Weir gives us the first ever full-scale, in-depth biography of Henry VIII’s famous mistress, in which Weir explodes much of the mythology that surrounds Mary Boleyn and uncovers the truth about one of the most misunderstood figures of the Tudor age.

With the same brand of extensive forensic research she brought to her acclaimed book The Lady in the Tower, Weir facilitates here a new portrayal of her subjects, revealing how Mary was treated by her ambitious family and the likely nature of the relationship between the Boleyn sisters. She also posits new evidence regarding the reputation of Mary’s mother, Elizabeth Howard, who was rumored to have been an early mistress of Henry VIII.


Weir unravels the truth about Mary’s much-vaunted notoriety at the French court and her relations with King François I. She offers plausible theories as to what happened to Mary during the undocumented years of her life, and shows that, far from marrying an insignificant and complacent nonentity, she made a brilliant match with a young man who was the King’s cousin and a rising star at court.


Weir also explores Mary’s own position and role at the English court, and how she became Henry VIII’s mistress. She tracks the probable course of their affair and investigates Mary’s real reputation. With new and compelling evidence, Weir presents the most conclusive answer to date on the paternity of Mary’s children, long speculated to have been Henry VIII’s progeny.


Alison Weir has drawn fascinating information from the original sources of the period to piece together a life steeped in mystery and misfortune, debunking centuries-old myths and disproving accepted assertions, to give us the truth about Mary Boleyn, the so-called great and infamous whore.


My thoughts:  I know this the end of the month, but there have been so many excellent books out there, it was hard to choose just one as Book of the Month.  In the end, I had to go with Alison Weir's new book on Mary Boleyn. If you haven't read any of Alison Weir's books before, be warned, that it can be a little hard going at first.  Weir's research is exhaustive, she not only reads all the original source material, but pretty much every book ever written about Henry, Mary and Anne. She goes through the myths of Mary's life, methodically debunking each one.  Weir's writing style is more academic than elegant, she doesn't weave the known facts of Mary's life like a story. Because of this, I found the book easy to put down at times. I preferred to dip into the book, reading a little at a time, rather than trying to read it all the way through. In the end, you are left knowing about as much about Mary Boleyn as you did when you started the book. Frankly, I learned more about Francis I of France, Thomas Boleyn and Mary's husbands than I did the elusive lady herself.  She did however create a plausible case for Katherine Carey Knollys being Henry VIII's daughter, and the reasons why a child of Henry and Mary's could never be acknowledged, especially after Henry fell for Anne.

Here is an excellent in depth-review by Claire at The Anne Boleyn Files which pretty much expresses my thoughts exactly about the book.
Mary Boleyn

Svea Love said…
I can't wait to obtain a copy of this book and devour it... sporadically devour, of course ;) I became fascinated with Mary Boleyn after reading The Other Boleyn Girl, so I was quite excited to hear about the publication of this book.
October 28, 2011 at 10:59 AM

Elizabeth Kerri Mahon said…
The book is well-worth reading if only to see how meticulous Weir is in her research. I certainly have changed my opinion about her, she was definitely not the good-time girl that some historians would like us to believe.
October 31, 2011 at 10:49 AM