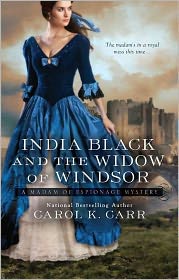 India Black is back-Her Majesty's favorite spy is off to Scotland in this new adventure to ensure the Queen doesn't end up getting killed.

When Queen Victoria attends a séance, the spirit of her departed husband, Prince Albert, insists she spend Christmas at their Scottish home in Balmoral. Prime Minister Disraeli suspects the Scottish nationalists plan to assassinate the Queen-and send the ever resourceful India and the handsome British spy, French, to the Scottish highlands.

French will take the high road, looking for a traitor among the guests-and India will take the low road, disguised as a servant in case an assassin is hiding among the household staff. India is certain that someone at Balmoral is determined to make this Her Majesty's last Christmas...

It’s no secret that I can became an instant fan of Carol K. Carr’s new series India Black after the first book was published back in January. Her latest, INDIA BLACK AND THE WIDOW OF WINDSOR, does not disappoint. In her new adventure, India must leave her beloved London and her business to go undercover as a maid to one of the guests in the royal party. She is assigned to work as a lady's maid to an eccentric and cranky marchioness with a nicotine addiction and a penchant for inhaling any powder that's in the vicinity. What I love about this series is that India is irreverent, sarcastic, feisty and independent. She has her hands full in this novel fending off the grabby hands of that middle-aged lecher the Prince of Wales, all the while trying to smoke out who the brains is behind the plot to kill the Queen.

India is completely out of her depth as a lady’s maid, and it’s a great deal of fun to watch her having to constantly bite her lip to keep from saying what she’s really thinking. India’s relationship with the Marchioness is a hoot and a half, talk about a super couple in the making! The two of them are like Laurel and Hardy, Lucy and Ethel, George Burns and Gracie Allen, name your own comedic duo. Her relationship with French is still on a very slow burner which I actually prefer, I’m not sure that India needs a love interest, although I look forward to finding out more about French as the series continues. The mystery is almost beside the point, I was having such a good time reading about the goings on at Balmoral, and India’s observations, that at times I forgot exactly what is was that she was there for. That’s not a criticism of the mystery per se; it was wonderful to see a story that dealt with Scottish nationalists for a change. When the culprit is finally revealed, this reader was stunned. I had completely gotten it wrong, which is the mark of a good mystery novel! In this novel, the reader is really let it on the limitations and lack of knowledge that India operates under compared to someone like the handsome French, who is more comfortable amongst the aristocracy.

Carr clearly knows the Victorian era very well, the book is filled with wonderful details, about what life was like below stairs, particularly in the royal household with the divisions between her Majesty’s Scottish and Indian servants. I have one quibble with the book, I wonder if the proper address for the Queen would have been ‘Your Majesty’ as opposed to just ‘Your Highness.’

Carr drops hints in the book as to what future mysteries India might be involved in, including one involving her mother. Here’s hoping that there will be more India Black adventures, I’m particularly interested in seeing what she might have gotten up to with the Zulu.

Elizabeth Kerri Mahon said…
Isn't she fabulous! The most refreshing character in a historical mystery series in years.
September 22, 2011 at 11:54 AM