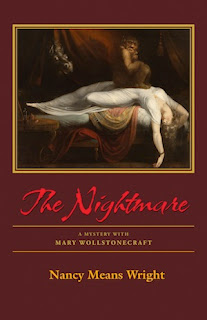 Scandalous Women is pleased to welcome author Nancy Means Wright to the blog.  Nancy is the author of 2 mystery novels featuring one of my favorite Scandalous Women, Mary Wollstonecraft.

While Parisians stormed the Bastille in 1789 and freed the starving prisoners, a masked Henry Fuseli coolly dealt with an abusive, fancy-dress devil at a London masquerade and released years of pent-up libido in his companion. Mary Wollstonecraft, a virgin of twenty-nine, who preached independence for women and declared “I shall never marry!” had been secretly longing for a grand passion. And here he was. Artist Henry Fuseli was all she hoped for: a man of fire and genius. She recalled scenes of exalted emotion in his art: heaving breasts, tensed and muscled thighs. His celebrated painting, “The Nightmare,” depicting a naked woman, asleep in a translucent shift with a grinning goblin on her chest and a voyeur horse (a mare) looking on, both thrilled and horrified her. “Like Milton,” Mary wrote, “Henry seems quite at home in hell.”


So, one might add: who was the real devil at that masquerade?

What Mary’s eyes saw that night was a short, small-boned man eighteen years her senior, with fierce eyes that seemed to drill through her gown. His unruly hair was unpowdered like her own; his lips curled into a cynical smile as he spoke in his thick Swiss accent. What he missed in height he made up by force of personality. He knew eight languages, had written as many books; his paintings hung all over the world. In conversation, the words poured out of him, sardonic, ironic, often obscene—he loved to tease and shock, and she interpreted that as interest in herself.

What Fuseli saw at the masquerade was a tall, slim, attractive woman in a plain gown and black stockings with an outmoded beaver hat perched on her lank brown hair. But her face caught fire as she spoke; he found her intelligent, a sparkling conversationalist—although no woman, he felt, was a match for his “genius.” Women were “too emotional, too fickle” to create a lasting work of art. They had “no character at all,” he agreed with poet Alexander Pope, and his erotic paintings echoed this belief.
Still, Mary Wollstonecraft was a challenge, and naïve enough to make an easy catch. Never mind he had recently taken a sexy but simple young wife, Sophia, the model for “The Nightmare.” But an 18th-century man, he felt, was entitled to a life of his own, and so he set out to arouse Mary’s “sleeping” sensuality. They met often at the home of Mary’s publisher, Joseph Johnson, who was a longtime friend of Fuseli’s; it was rumored that Johnson and Fuseli had been lovers—rumors he didn’t bother to deny—he might well have been bisexual. At any rate, he dropped in frequently at Mary’s rented house, invited her to his studio, and sent her steamy letters.

She became obsessed with him, After penning her controversial Vindication of the Rights of Woman in a six-week burst of passion, she fell into writer’s block—except for letters to Fuseli. She posted several letters a day, denying any sexual interest but expressing her desire to “unite myself with your mind… If I thought my passion criminal, I would conquer it, or die in the attempt. For immodesty, in my eyes, is ugliness.” 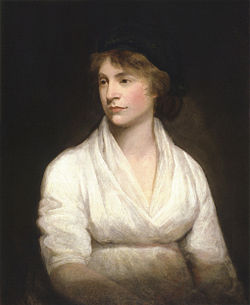 Fuseli kept her letters unopened in his pockets—or so he bragged. She recognized his “reptile vanity,” and knew he had little interest in women’s rights. Nevertheless, she felt she couldn’t live without seeing and conversing with him daily; and in the fall of 1792, she marched up to his door on Queen Anne Street to propose a ménage à trois with him and his wife. Sophia was horrified and showed her the door. Fuseli stood on the landing, his face red with fury. It was evidently all right to dally beyond his borders, but not in the sanctuary of his respectable home. London was scandalized

What were the real reasons behind Mary’s daring? Was she really in love, or was it the struggle with her growing sexuality? Was she the dupe of Fuseli’s philandering? Or as biographer Lyndall Gordon suggests, was she seeking a surrogate father to make up for uncaring, inebriate father? Was this a “frustrated craving to reconstitute a family?” Or was Fuseli’s anger sparked by Mary’s new celebrity (and notoriety), due to her Vindication, translated now into three languages? Fuseli couldn’t bear to be bested.

Whatever the reason, she was deeply hurt and humiliated. She wrote an apology; told her publisher: “We must each of us wear a fool’s cap; but mine, alas, has lost its bells.” Then off she flew, “a spinster on the wing,” to revolutionary Paris “as a sort of war correspondent. The ideals of liberté, égalité offered new hopes for women’s rights. She would brave the guillotine: “neck or nothing!” she wrote a friend.

What she didn’t know was that she was soon to lose her own head, metaphorically speaking, to a man even more reptile-like, than Henry Fuseli.

Thank you so much for stopping by Nancy! For more information about Nancy or her books, please check out her webpage at www.nancymeanswright.com
Henry Fuseli Mary Wollstonecraft

Nancy Means Wright said…
Thanks, Elizabeth, for inviting me to write this for your gorgeous website! I myself love scandalous women. And I want to read your book--it sounds fabulous.
September 6, 2011 at 2:35 PM

Mary is a fascinating woman. Using an historical feminist in mystery fiction is a wonderful idea.

T.W. Fendley said…
Fascinating! Thanks for sharing this insight into Mary Wollstonecraft's life. Now I must know more about these scandalous women!
September 6, 2011 at 7:36 PM

Nancy Means Wright said…
Thanks, Jacqueline! I find her fascinating, in part, because she was so conflicted. A protagonist with flaws is more interesting, I think than a near 'perfect' one. InN real life she always struggled to overcome her 'faults.'
September 6, 2011 at 7:42 PM

Nancy Means Wright said…
Scandalous women are always fun to read about because they're so fiercely independent and risk-taking. Glad you think so, too, TW. And I appreciate your comment and am delighted to know you want to know more. So do I!
September 6, 2011 at 7:46 PM