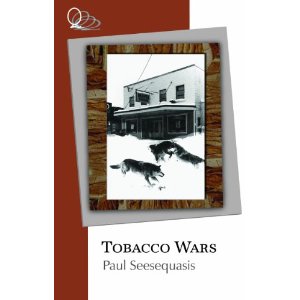 Tobacco Wars is a novella about the meeting of two worlds. Set in the early 17th century, it follows the mythical and rollicking adventures of Pocahontas and playwright Ben Jonson - from the inns, alleyways and royal courts of London to pirates, perilous crossings and hostile warriors in the new world. And as worlds are turned upside down and irrevocably altered - a new commodity - tobacco, intoxicates the old world at the same time as an 'Indian princess' undertakes her own age of exploration.

Paul Seesequasis is a writer and journalist. He was the founding editor of the award-winning Aboriginal Voices magazine, recipient of a MacLean-Hunter journalist award, a broadcaster and writer. His short stories and feature writings have been published in Canada and abroad. Tobacco Wars is his first novella.

My thoughts:  This review is part of TLC's book tour for Tobacco Wars.  When I read that the book featured Pocahontas as a character, I knew that I wanted to review it. This novella is not straight historical fiction, it is more of a mythical look at what might have happened when Pocahontas went to England. The story is entwined with another story, that of Bear Woman which at first seems like another myth but at one point seems to be set in the contemporary world.  While I found the writing compelling in the novella, it really wasn't my cup of tea. At times I found the narrative a bit confusing, and Pocahontas came across, at least to me, as nothing more than a cipher.  I knew no more about her than I did after watching the Disney cartoon movie or Terrence Malick's film that came out several years ago.  Perhaps, she will always be unknowable but while that might be fine on film, it makes it hard to sympathize with the character. I found the descriptions and the story of Tobacco itself to be a more compelling story that of Pocahontas.

For a historical fiction fan, the book is a bit of a disappointment.  For those readers who are might be more lovers of literary fiction, this book is definitely up your alley.
Ben Jonson Pocahontas

Anonymous said…
I'm sorry this didn't turn out to be a good read for you, but thanks for sharing your thoughts as part of the tour.
August 3, 2011 at 9:38 PM