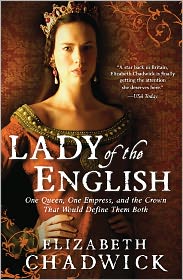 Synopsis:    Royal wives and royal widows, Queen Adeliza and her stepdaughter, Empress Matilda, are the only two women to be titled "Lady of the English," a title that does not come cheap. Adeliza, widowed queen and peacemaker, is married to a warrior who supports Stephen, grandson of the Conqueror. Matilda, daughter of the last king and a fierce fighter, is determined to win her inheritance against all odds and despite all men, including Stephen. Both are women who, in their different ways, will stand and fight for what they know is right. But for Matilda, pride comes before a fall. And for Adeliza, even the deepest love is no proof against fate.

Elizabeth Chadwick is the author of 17 historical novels, including The Greatest Knight, The Scarlet Lion, A Place Beyond Courage, For the King's Favor, Shadows and Strongholds, The Winter Mantle, The Falcons of Montabard, and To Defy a King, six of which have been shortlisted for the Romantic Novelists' Awards.


When Sourcebooks offered me the chance to review your new book LADY OF THE ENGLISH, I did a happy dance. As I have mentioned on my blog before, I am a total Plantangenetaholic, and LADY OF THE ENGLISH is the Holy Grail. I have always found Matilda one of the most fascinating women in a family full of fascinating women (Plantagenet men certainly married interesting women!). If my word count for SCANDALOUS WOMEN had been bigger, she would have definitely been in my chapter of Warrior Queens.

This is the first novel of yours that I have read, and it will definitely not be the last. All I can say is where have you been all my life? My dream is to one day write historical fiction with the depth, breadth and clarity that you do. I don’t think that there was a wasted word in the entire book. Your portrait of the Middle Ages is so vivid, and you write with such ease about the reality of daily life in Medieval England and France that it makes me wonder if you were perhaps channeling some past life as you write. I can see why the HISTORICAL NOVEL REVIEW callsyou "The best writer of medieval fiction currently around." I certainly won't quibble with that!


You manage to convey the complex personalities of your characters with deft brush strokes, without letting the complex plot and who is betraying who get in the way. By the end of the novel, I felt that I knew these characters as intimately as if I were sharing a trencher with them in the great hall at Castle Rising.

What made this book such a joy was getting to know historical figures that I knew little about such as Henry I’s widow Adeliza of Louvain, Matilda’s second husband, Geoffrey of Anjou and Brian FitzCount. I disagree heartily with the Publisher’s Weekly reviewer who claimed that Geoffrey of Anjou was greedy and unpleasant. The poor kid was told at the age of 13 that he was marrying a woman twice his age; cut the poor boy some slack. Matilda and Geoffrey were two strong personalities who were always going to rub each other the wrong way. I loved that their relationship wasn’t totally black and white. There were shades of grey, shades that Matilda had difficulty dealing with. I enjoyed watching her despise Geoffrey at the same time that she was incredibly attracted to him. It’s a shame that she never really took the time to get to know her husband better. Henry I is such a dominating personality that I almost forgot that he had remarried again. Thank you for introducing me to Adeliza, a woman who appears fragile on the surface but has hidden strength. At first I thought she was going to be just a milque toast pious goody two shoes, but she had depths that I never realized. I rejoiced that she received her happily ever after even though it was short-lived. The contrast between Adeliza, who seems to be the personification of a medieval woman, and Matilda who bangs her fists on the cage door, was fascinating.

I felt for Matilda although I don’t know that I could ever have been friends with her. To be that intelligent and to be treated like a second class citizen, to constantly have to prove that you not only deserve the right to rule, but that you shouldn’t be discounted just because she was female. Her pride and ambition launches England into a bloody civil war but really who can blame her? Why shouldn’t she have fought for her right to the crown? It was lovely to see the relationship grow and build between two such different women.

The book started off a little slowly for me, but as I kept reading the pace picked up and I couldn't put the book down because I had to know what happened even though this period of history is very familiar to me. However, I felt as if I was reading about this period for the very first time. While the story of THE LADY OF THE ENGLISH is epic in scope spanning over a decade, what I will remember the most are the personal scenes between the characters particularly the scene between Adeliza and William D’Albini (whose descendent is played by Brian Cox in IRONCLAD) at the end of the book which I found heartbreaking. You aptly conveyed the toll that a civil war takes on the families of the men who go to war.

I hope that if the Plantagenet’s are ever given THE TUDORS treatment by a TV network, that they hire you as a consultant. Although I'm a little frightened to put that out in the ether, given what I've seen of THE BORGIAs thus far.
Elizabeth Chadwick Matilda of England

Marilyn Smith said…
Thanks for a wonderful review. I also enjoyed learning about other historical figures - Adeliza, William D'Albini, Brian FitzCount, and Geoffrey of Anjou. It was interesting to learn more about Geoffrey and see some events through his eyes. It must not have been easy for him to endure the scornful attitude Matilda had of his lower status (compared to her). However, as he grew older, it seemed that he missed not having a better relationship with her, but no doubt knowing that it wouldn't happen. Henry I's uncaring attitude towards Matilda's feelings certainly led to unhappy repercussions for her.

William D'Albini was an intriguing person to learn more about. Although a supporter of Stephen, he was an honorable man and did his best to be fair in his relationship with his wife Adeliza and her stepdaughter Matilda. I thought that the description of Matilda's landing at Arundel was excellent. The problems and conflicts, along with the solutions that followed for those involved, were understandable and believable.

It was fun to meet John FitzGilbert again and to become acquainted with his brother William Giffard. The scene with John and Brian FitzCount at the stables being cleaned out was great.

Lady of the English is another outstanding historical novel by Elizabeth Chadwick and a definite must-read.
August 23, 2011 at 8:58 PM